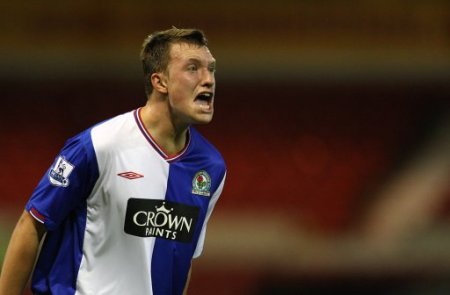 According to Arsenal blog We are the North Bank, and verified on Twitter by Express journalist Matt Law, Arsenal had a £16m+ bid accepted last night for Blackburn’s Phil Jones.

While many would question if a 19 year old, relatively inexperienced centre-half would have been the answer to Arsenal’s defensive issues, it seems Arsene Wenger was ready to break his transfer record for the England U21 international.

It seems a combination of location and United’s standing in the game sealed the deal for Alex Ferguson. Law said “[Arsenal] were prepared to offer bigger wages than United. Jones chose United because of north-west connection and footballing reasons. Wenger did all he could”.

At the very least it signals that the club are prepared to spend serious money this summer. Jones’ departure from Blackburn will certainly complicate a move for Christopher Samba but Wenger may well now test Bolton’s desire to keep hold of Gary Cahill.

It’s thought the Trotters have put a £17m price tag on his head but with just 12 months of his contract left to run the financial realities of the situation may force their hand should Wenger decide Cahill is a player he wants.

Yes i’m sure he did try everything but unfortunately our demise over the last 6 years shows just as with Smalling that Arsenal are not such a big attraction anymore.If AW would have gone for him last season instead of useless Frenchmen then he may well have got his man….same old same old…too little,too late!

Well, in the last 2 or 3 years we did manage to snatch Ramsey from under their noses, that wasn’t such a bad transfer coup.

Only because we offered more in wages.

I’m quite okay to let this one slip through the fingers if it means we get one world class player in. I’m not so confident that we will though.

I was more surprised at the Smalling one than this. Why wouldn’t he go to the Champions? Plus it means no upheaval in his home life etc.

Got to take the positive and for Wenger to bid that much in the first place suggests the first signs of change.

The fact that we are willing to bid this much and pay big wages is great news. If I had a choice between Cahill or Jones it would be Cahill any day of the week. Make it happen Wenger!

Anyone else worried we’ve seen the best of Vermaelen? Until he gets some games and look solid I wouldn’t depend on getting anything out of him. Not completely confident that he’ll be the quality man in the middle that he was. So I’d like to se us very active in finding two central defenders this summer as we have two decent central defenders, 1 question mark and zero world class players.

Maybe Vermaelan is the answer at left back… Gael is gone and Gibbs can’t stay healthy.

@Matt
they do if they want to win anything…..Ronaldo,Da Silva twins,smalling,jones as well as DiMaria,Mascherano,Van Nistleroy,Toure…all players over the years that saw we were in decline….

@ yozza We were never in for mascherano, di Maria had passport problems just like messi did, ruud are you serious? We actually passed on toure, no offense but unless you were there and spoke to the players and asked them why they supposedly decline arsenal, u can’t comment.

Personally I think missing out on mexes is worse then jones, we need a Cahill more then we need jones, as much as people hate koscielny I believe both he and djorou have what it takes to play at the highest level, we need an older player with plenty of experience of playing prem football or football at the highest level not someone who is relatively inexperienced like jones, who will take a few years to reach his potential. To me this is good news that weenier is finally willing to spend.

Jones is a prospect nothing more and we need experienced players.

At least means wenger is willing to spend….finally.

I for one didn’t think he would be willing to spend £16m on a single player especially a defender.

We’ve always been a little secretive about our transfer dealings. I still keep the faith that we will come up with the transfer goodies this summer.

Cahill and Gervinho are begining to look like a real prospects amongst the rumour mill.

Am 100% sure JD and Koscienly are beta defenders than ths phil jones,let Wenger bring in a more experienced one like Samba,cahill,mexes,per martesacker type en i believe we wil be set at the backline..

Thank god not another teenager with bags of potential.

We’ve dodged a bullet there, few! 16m, what a crock of shit.

Buddy please Fuck Off to a Man U forum. Your only here to cause trouble.

Mexes is AC Milan’s. Cahill would be a waste of 17 million, ok if cheaper. Vertonghen is a good idea but we’d need to be quick because Ajax aren’t going to sell their entire back 5 and they’re all highly sought after.

I think Klose would be a great shout but would he sign a 1 year deal? Would we pay him 100k a week or whatever?

Ah. Ifs buts maybes. What a lot of BS the summer provokes.

Klose has signed for Lazio

Arseblog … an Arsenal blog | A signing, a bid and some talks

[…] the news emerged that we did bid for him, we offered him more than United did, but he chose to go there. Which I understand completely. […]

Arseblog … an Arsenal blog | A signing, a bid and some talks

[…] the news emerged that we did bid for him, we offered him more than United did, but he chose to go there. Which I understand completely. […]

What has Smalling got to do with it? Were on about an overpriced deal this year. Wenger may well rue some of his choices but his policy of value has worked and will again. Why would you slag Ramsey too? He’s been injured for 90 % of his Arsenal by Shawcunt. probably because you wanted him.

To Reddevil in the voice of the inbetweeners.
“ooh Smalling ooh ooh Smalling, I love you Smalling”

Can we ban that Man Utd cunt. This forum is for Arsneal ans, not just people who live in London you puppycunt.

Folks, please just ignore wind-ups from opposition fans, we’ll deal with those comments as we see them.

You can always alert us using the contact form too. Thanks.

Ps – I have no problem with opposition fans commenting here but obvious trolling won’t be tolerated.

Arsenal must go after a big player to quash the negative images build up over the past six seasons. Fergie is only waiting on the sidelines to see the players Arsene is after and picking them up one after the other.

He’s a 19 year-old 5’11 centre-back who has had one good season playing next to the most physically and aerially dominant centre-back in the league. What he offers is pace, intelligence and quality on the ball as well as good tackling – in short, attributes we already have in abundance in Koscielny and Vermaelen. What we really need from a new centre-back is for him to be commanding – in terms of his personality on the field, in the dressing room as well as aerially from set pieces and long-balls. This is why I’m actually encouraged by this story –… Read more »

of course ramsey choose arsenal because he know could easily get into arsenal midfield compare to united. he want to have more time on the field rather than on united bench. same as wallcot. some young players choose arsenal because wenger can promise them the place on the 1st team. while some prefer to learn from the winner year in year out. if they failed to make grads they knows they are crap. but young gunners will never know that. arsene will always said you are intelligent bla bla champion bla bla heart of steel bla bla.

If we are going to spend that kind of money on a centerback, let’s spend it on Sahko from PSG. He is Sol Campbell all over again. Big, athletic and a leader of men. He became their captain at 18. He can play left back and he is going to be a fixture on the french national team for the next ten years. PSG just had a really good season in Ligue 1 while Blackburn, with two very good cb’s and a decent goalie barely survived relegation. If we can’t get Sahko, lets get Hangeland from Fulham. That guy is… Read more »

My fear is that we will develop a reputation among potential transfer targets that Wenger is the manager to make you a better player but Ferguson the one to make you a winner.

On Friedel, my guess is that Wenger saw him as the No 2/mentor to Szczesny, but Friedel wants first-team football and, correctly, thought he had a better chance of it with the Chickens.

Finally, call me old fashioned, but “verified on Twitter by Express journalist Matt Law”? Not my idea of confirmation.

well.am no fan of arsenal but wont hide that i admire your style.but wenger needs some pressure from the up to sort things.what happens if nasri goes to utd?

[…] on the deal which took England under-21 international Phil Jones from Ewood Park to Old Trafford, despite Arsenal also having a bid accepted, the Rovers coach […]

Is Arsene Wenger Running Out Of Time?|The Green Gooner

[…] Jones to Manchester United and Ricky Alvarez to Inter Milan, both transfers seemingly explainable as Jones was unwilling to move away from the North West with Manchester United being his preferred alternative while Alvarez decided to join his boyhood […]

Is Arsene Wenger Running Out Of Time? | The Green Gooner

[…] Jones to Manchester United and Ricky Alvarez to Inter Milan, both transfers seemingly explainable as Jones was unwilling to move away from the North West with Manchester United being his preferred alternative while Alvarez decided to join his boyhood […]