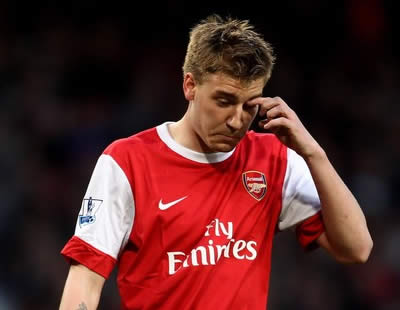 Danish international Nicklas Bendtner has confirmed his desire to leave Arsenal this summer. Speaking to sporten.dk he said, “I have decided 100% that I must leave Arsenal. I’ve considered this for a long time and was quite clear when I arrived at my decision.

“It doesn’t feel particularly strange to not know what my future holds – I’m quite calm and confident that I’ll be fine at a new club.

“I’m fully focused on Saturday’s game for now, because it is incredibly important, but after the international is over I may focus more directly on my future [but] I am sure I could easily go on holiday without having to panic about it. I’m looking to relax, mentally, after a season that was not what I hoped for or expected.”

Last month, Bendtner’s father and agent, Thomas, made it clear his son had called time on his Arsenal career, saying, “He has made his decision and he has told it to Arsenal. Nicklas needs to be playing from the start so, sadly, he must leave. He wanted to finish the season first, so no-one could say he didn’t fight for a first-team place right until the end.”

Much maligned by sections of the Arsenal fan base, Bendtner nevertheless has a decent goalscoring record. From 40 Premier League starts he has a total of 22 goals, and an overall Arsenal tally of 43 despite missing large portions of the last two seasons through injury and playing many games out of position. A natural centre-forward he found himself forced wide due to the form of Robin van Persie, although his best goalscoring period came when given a run of games in the middle.

Bendnter’s self-confidence was often misinterpreted although there have been suggestions from inside the club that greater application during games and training would have seen him come closer to fulfilling the talent he has. Talent which will now be on display elsewhere.

Arsenal will look for a fee of around £10m with Bayern Munich and a number of Italian clubs thought to be monitoring the situation.

[…] Arsenal’s pre-season training set to begin early next week, and with his rather definitive statement expressing his desire to leave hanging over him, it appears Bendtner may have no choice but to […]

[…] Danish international, who spoke publically about his desire to quit Arsenal last month, is thought to have been approached by Bundesliga champions Borussia Dortmund and Portuguese side […]

All hail the king.

Surprised it took him nearly 3 years after he said this to actually leave the club. Also, did anyone else come back to this story after listening to the latest Arsecast Extra?