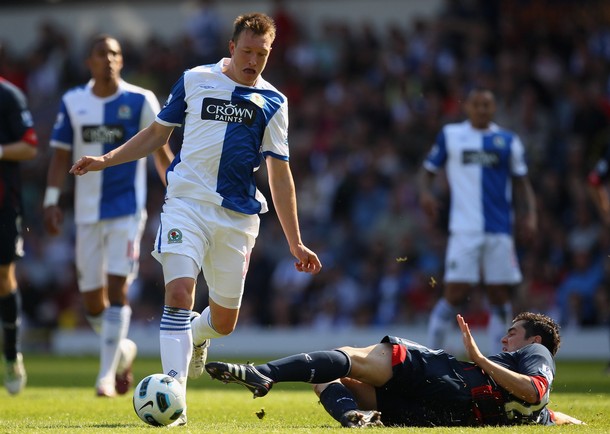 Blackburn Rovers defender Phil Jones is the subject of a four-way transfer tussle, according to the Daily Mail.

Manchester United, Manchester City, Liverpool and Arsenal have all been tipped as possible suitors for the 19-year-old, with speculation mounting that he will quit Ewood Park with a view to furthering his career at a higher level.

Set to feature for Stuart Pearce’s England under-21 side at the European Championships this summer the Rovers youth team graduate has been in impressive form this season and was rewarded with a five year contract extension by the club’s new owners in January.

Liverpool are thought to be leading the chase with Kenny Dalglish eager to infuse the spine of his starting XI with the country’s best young talents. The Reds bought Andy Carroll in January and are thought to be on the verge of a deal to sign Jordan Henderson from Sunderland. It is believed that the Anfield hierarchy see Jones as another piece in the jigsaw as they look to regain a place in the top four.

Valued in excess of £15 million by Blackburn, the Lancashire outfit will no doubt be hoping that all parties  follow up on initial scouting reports with the potential for Jones’ fee to push past the £17 million paid out by Chelsea and Manchester City respectively for Damien Duff and Roque Santa Cruz.

If Liverpool do bid big for Jones it is likely to heavily influence Arsene Wenger’s decision to push forward with a potential deal. Having refused to spend more than £17 million on a single player during his time in North London the Frenchman is unlikely to get involved in a bidding war for a player valued highly by his Premier League counterparts.