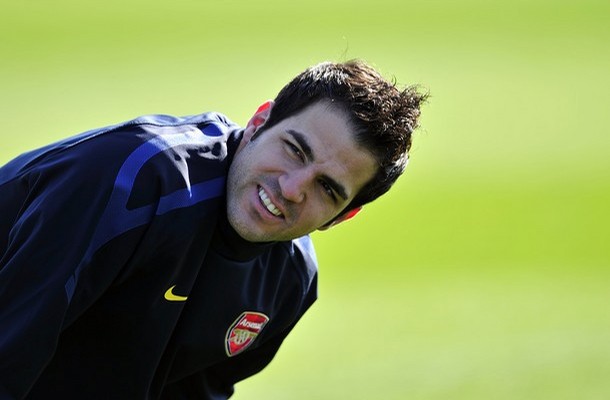 Cesc Fabregas has given his strongest indication yet that he will stay at Arsenal this summer after confirming that he is very happy at the Emirates.

The Spanish midfielder, who has long been a target for childhood club Barcelona, had been heavily tipped to quit the Emirates this summer to return to the Nou Camp but speaking today at an event in Madrid for the launch of a new cologne by Angel Schlesser is quoted by Marca as saying:

“I’m very happy, I’m an Arsenal player now, and that’s it. Wenger knows what I want and he’s the boss, he decides.”

Paying lip service to the well publicised transfer speculation linking him with a return to Barcelona, Fabregas made clear that while he was full of admiration for the recent success achieved under Pep Guardiola he would not speak in public about a future move out of respect for the Gunners.

“It’s frustrating not to win trophies. Barcelona are a great club, the best in the world, and playing there is a guarantee to win.

“I won’t step forward and say I want to join Barça. After 8 years at Arsenal, I won’t harm the club. That’s not my way of being.”

The news will come as a major fillip to Arsene Wenger and Arsenal fans as they look to retain their best players this summer while adding further new faces in an attempt to end their six season run without a trophy.

And that’s why we love him. Even if he does leave, he’s shown class very few professionals in any career show.

Not a bad comment from Fab but there is an undertone ” the boss knows what I want”
Wenger should help every1 for once , buy the right players and not bargaings.

I think most sensible fans know that Cesc would go (as would most top players, lets be honest) IF Barcelona were to make an offer somewhere near his market value (£45-50m), unless that happen I believe is is happy to stay.

Arsenal hold the cards here, Cesc is on a 4-yeal deal. Cesc would be 25 next May, we can afford to keep him for at least another year without reducing any potential fee.

How can you interpretend this assurering? I hear him say “Arsene knows I want to go, and hopefully something is being worked. However I will not but public pressure on Arsenal”

Event thought I read it as he wants to go, it’s still pure class to be so respectful to Arsenal. That is were I see the biggest chance of him staying. Appearently he is quite mature and intelligent, and who with just a bit of sense, would like to play with that bunch of diving, refereeing shouting and choke-grabbing c*nts??

Marca is a Real Madrid paper, of course they are going to dress this up as a snub to Barca. I have no doubt he is off this summer. As long as the money is re-invested then he goes with me good wishes.

Great to see a player with class, arsene knows what he wants, we all know what he wants. It’s up to barcelona to come up with an acceptable offer or fuck off now. This shouldn’t be allowed to drag on all summer long.

Classy but an unsettling influence on the team none the less….

It’s clear from the interview that Cesc has told Arene he wants to leave, he just doesn’t have the guts to admit it publicly. If he had any class he’d keep his mouth shut and say nothing, instead of slyly trying to engineer a transfer by using the media as a weapon to get what he wants. Fuck him.

billy….we all know that cesc wants to leave….bt wid dis statement wat he has done is dat now arsenal has d upper hand in d transfer….if he wud hav admitted publicly he wants to leave den definetely his price would have went down….bt instead he allows arsenal to get d most out of him if he is sold…if he aint…he is till happy to play for arsenal….nw i will say dat dis a very mature and loyal gesture form cesc……even if he goes he does have my best wishes … bt i hope he doesnt goes…

I’m not reading that shit.

Fair play to our captain, he has shown class once again! Not like the Roonies, tevez, adebayors, etc etc. Basically the lad would love to play for barca but would also love to stay at the arsenal if we march his ambitions. The board now need to step up because Fab is showing true loyalty which is not common these days and the club should take take cesc for granted. Come on Wenger let’s build a team around our captain.

The club should not take cesc for granted I mean! Poxy iPhones

Anders. I agree totaly with the last 7 words

It’s like having a girlfriend that says she loves you, but would rather spend the evening with another guy who spends most of his time being disrespectful towards you.

Honestly, Cesc, stop coming out with all the platitudes and claims of loyalty simply to cover your behind if the move to Barca doesn’t happen because they are too cheap to come up with a fee worthy of your services. We all know that however much you like us and want to play for us, ultimately you like them and want to play for them far more.

Arsene is too intelligent and calculating to think of Cesc like a “girlfriend.” You don’t build a top for side while turning a profit in the EPL by being overly attached to players. It’s business, and Arsene would sell any of his players if the fee was attractive.

I’m not saying Arsene thinks Cesc is his girlfriend. That’s ridiculous. I am simply using a metaphor that sums up Cesc saying one thing, while his actions contradict that.

The metaphor is not apt.

and not only, the metaphor shows that you are still too simple to understand the slightest complexities of a woman`s feelings! 😉

The metaphor is fine. And ‘bird’ it’s unlikely that you have much of a clue about men.

Amazing how you guys can twist Cesc’s words…. this is exactly what the press does. Why can’t people take it word for word? Did you guys miss out the part he said he has too much respect and love for the club to ask for a transfer? He will stick with Arsenal and now it all depends on Arsene. Arsene said last week that he’s keeping Cesc. Simply means Arsenal is NOT selling Fabregas and he’s happy to stay. Barca will most probably come back with a bid after 2 years when Cesc only has 2 years remaining on his… Read more »

Cesc is a genuine good lad. Maybe he will leave but with what he’s said here it shows that he’s not willing to screw Arsenal and play up to Barcas scummy tactics. Ill always have more respect for Fabregas than Nasri and the stunts he’s trying to pull at the moment. He loves Arsenal. He nearly sacrificed his world cup when he decided to stay on the pitch for the Arsenal in that champions league game with a break in his ankle. There is nothing wrong with him wanting to return to his hometown club in the future, once he’s… Read more »

Fuller quotes from Cesc in the Guardian: http://www.guardian.co.uk/football/2011/jun/15/cesc-fabregas-frustration-arsenal-transfer

This paints a much more mature, cautious, and, dare I say, loyal portrait of Cesc’s response to questions about Barca’s overtures.

This is some serious media bullshit. Every newspaper translates whatever they want. If you look at his actual quotes from Marca: ¨No todo depende del futbolista. El verano pasado fue muy difícil para mi y no quiero que se repita otra vez. Una persona tiene valores o no los tiene. Yo no puedo decir nada del Arsenal después de ocho años porque se podría estropear todo después de tantas alegrías¨ ¨Not everything depends on the player. The last summer was very hard for me and I don´t want to repeat it this time. A person must have values or not.… Read more »

Totally different than your translation, and one much closer to what the Gaurdian published.

Thats exactly the point we’re making, Fabregas goes about his business with a bit of class. Of course he would like to go back to Barca but he’s not going to tow the Barca line and try and leave on the cheap. He deserves credit for this. He’s given us 8 years of good service and hopefully he’ll give us more, but if not i will still applaud him as an Arsenal legend and wish him luck in the future because he has carried himself in the right way.

such a class act from a classy man

[…] Cesc said that although he was frustrated at not winning trophies he was happy at Arsenal. Arsenal fans will hope that Barcelona continue to undervalue their […]

[…] Fabregas himself has remained coy on the speculation despite being questioned about his future by the Spanish media at a recent promotional event in Madrid. […]