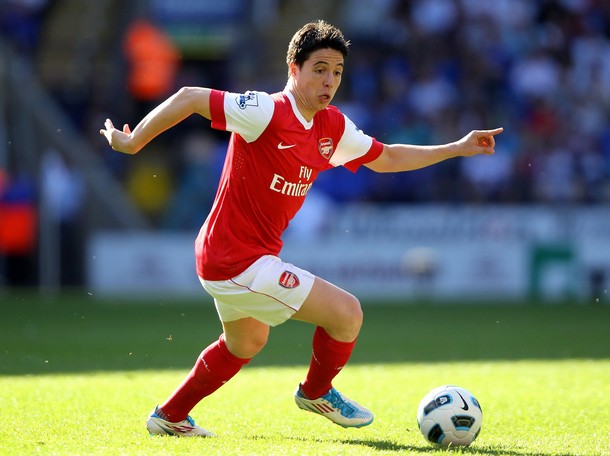 England captain Rio Ferdinand has spoken publically about his admiration for Samir Nasri as speculation mounts that Manchester United could attempt to lure the Arsenal midfielder to Old Trafford.

Nasri is thought to be stalling on a new deal at the Emirates in the hope of negotiating a significant pay increase, however, with only one year left on his contract potential suitors are already circling knowing the player could leave on a free at the end of next term.

Both Real Madrid and Barcelona have been linked in recent months although it is the supposed interest of Sir Alex Ferguson which has dominated the headlines in recent days.

Nasri himself has done little to dampen the speculation linking him with a move to the Premier League champions, telling TF1 show ‘Telefoot’ that he would wait, ‘to see if there is anything concrete about it [the interest].’

Already beckoned to Old Trafford by compatriot Patrice Evra, it appears that Ferdinand has also voiced his approval by telling Skysports.com:

“Samir Nasri is an excellent player who has a good technique and a huge amount of talent and he scores goals.

“For me, he is one of the best players right now. I think he even won the title of best French football player at international level.

“The French have a history of good players here. Thierry Henry has been fantastic. Just like Cantona. And let’s not forget Marcel Desailly.”

Isnt it nice that Rio manages to get that horse faced mug caught in every story going?

I disregard everything the [email protected] says as a rule but what I do find worrying is that it’s more and more likely Nasri will join Utd.

RT @rioferdy5: My quotes about Nasri are not recent – spoke about him way before speculation started #MUFC #AFC

We prefer not to believe your Tweet Rio because we don’t like you anyway. For now we’ll just assume that the only thing you Utd players learnt from the Barca CL final is a lesson on how to tap up players from other clubs. It’s just for convenience sake.

Honestly some of you folk are so gullible, jumping up and down and getting led by the nose by some of these papers. You would have thought you learned from the Fabregas saga..can’t wait for Jack to be quoted saying he likes MC before being cut off..Jack admires Man City..actual quote before being cut off, Jack likes McDonalds…calm down, Nasri will sign with us.

None of this shit matters. Nasri might not stay at Arsenal….but he sure as hell will not be sold to United.

Remember it’s the club first who get to accept an offer, and there will be plenty of other clubs (real, ac, inter, bayern etc) who would love to have a talent like Nasri.

And when we win the league next season it’s Nasri who will feel more than a little foolish. (still hope he stays even though it’s getting harder and harder to keep an optimistic facade abt this)