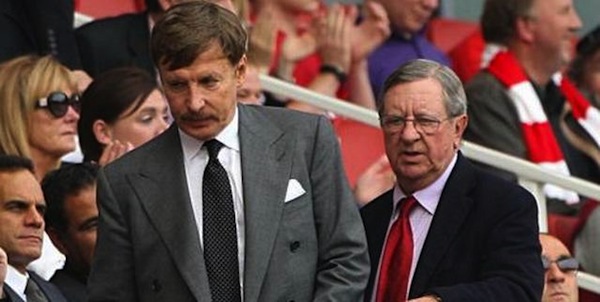 Arsenal Chairman Peter Hill-Wood has hit back at claims by former director, Lady Nina Bracewell-Smith, that the current board should resign.

Speaking on Twitter earlier this week, Bracewell-Smith called the Arsenal board ‘passe’ [sic] and said they had no more left to offer. However, speaking to the Daily Star the chairman said, “I wouldn’t pay any attention to it myself. I don’t know why she is suddenly sounding off.

“She put something like £100m in her pocket and she didn’t earn a penny of it. She should keep herself quiet and not complain”.

Bracewell-Smith acquired her shareholding via her marriage to Sir Charles Bracewell-Smith and became a non-executive director of the club in 2005. With £120m+ in her account since the sale to American Stan Kroenke, she can often be found on Twitter, opining about Arsenal.

She has since deleted the Tweets in which she said the board should resign and, after also criticising David Dein, backtracked and posted a glowing testimonial to the former director, who sold the shares he bought for £300,000 to Uzbeki Alisher Usmanov for £75m in 2007.

My only question is why does he speak to the daily star?

He owns or at least has some kind of share in the Daily Star… :/

don’t think AW/IG help the board with the long drawn out transfers… Makes everyone seem laid back and uninterested.

Hill Wood, Bracewell etc they are all clowns who have shown us their true “custodian” ways. Mugs the lot of them.

It would be interesting to know just why the woman performed such an about turn with respect to Dein. The clarity of the earlier insults towards him really can’t be read ambiguously…..

The moment directors sell their shares, they should get “flushed” from the board and not hang around like a bad smell.

Hillwood denies sexism during an interview, while slapping his secretary on the arse and telling her to put the kettle on “there’s a good lass!”

You can cut the sexual tension between them with a knife.

Foreplay via the press, it the upper class way.

six to one, half dozen the other. im more surprised hill-wood even knows what the star is.

I truly appreciate this post. I have been looking all over for this! Thank goodness I found it on Bing….