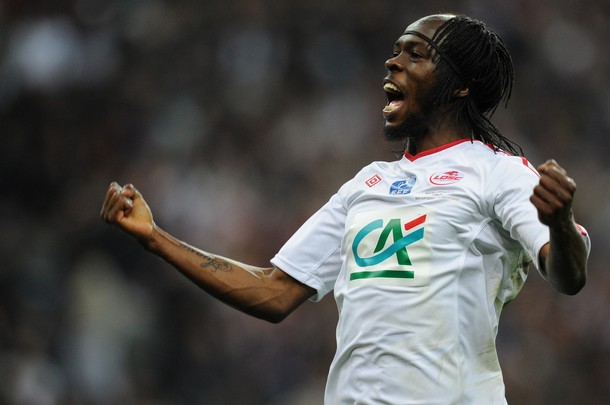 Another day, another report in the French media claiming Arsenal are closing in on Lille attacker Gervinho.

This morning L’Equipe claims that the Gunners have tabled a final €12 million offer for the Ivorian, which the Ligue 1 champions will accept.  The 24-year-old has also reportedly agreed a four year contract at the Emirates and could undertake the formality of a medical this afternoon.

Throughout the Wenger era player transfers into and out of the club have often fallen into two categories; epic, drawn-out sagas and those completed under the radar in double quick time. It is perfectly obvious into which group Monsieur Gervinho’s move falls.

Stay tuned to Arseblog News for any further developments…

I for one welcome the era of the magnificent forehead!

At least that will bring the end to one transfer saga

dazz mate what the fazz? i thought i didnt wanna see your nazz abazz anymazz you twazz?

Player having a medical at Colney today — Arsenal Action

[…] what is being reported in L’Equipe, it is likely that this player is Gervinho. However there are rumours floating about that it could […]

“It is perfectly obvious into which group Monsieur Gervinho’s move falls.”
Is it? Or is that a joke? I don’t get it. It hasn’t been long and drawn out, but it hasn’t been under radar either. It’s been in all the papers. It’s been, like, normal, no?

It has bee drawn out. Our approach for the player was made public knowledge weeks ago. It probably was started privately before that. I appreciate that these things take tone though.

At last
This ones been dragging like Alex Reids knuckles

Dawn of the FIVE HEAD!

Is gervinho going to give up the tefal adverts then

I bet he holidays in Elevenorife.

Even when we do sign someone, it’s so drawn out that any excitement has long gone. When was the last time we had the surprise and excitement that Bergkamps signing produced? I guess it was Sol campbell transfer for me.

why does everyone think that transfers just up and happen? even if one seems to pop up our of nowhere – Eduardo comes to mind – I guarantee that took a while behind the scenes to complete. everyone complains that our transfers take forever. well look at the de gea transfer to united. he was linked back before the season ended and just completed the transfer today. the only reason it seems like forever is that someone leaks info to the media and the hype train begins. negotiations on fees (affected negatively by the infinitely stretching and evasive media in… Read more »

meh! If Gervinho is the answer what was the question? Bendtner?

Hi I don’t really write on these sites just read them but felt the need to say god I hope we do sign some one soon cos this is taking the pee a bit wen u see wat others have done or are doing. I’m not one of those fans that think wenger shud go but as seasons go by I’m getting like one of then. I think fans gone but to be honest does that matter wen u think bak to the barca game he didn’t even turn up and wilshere was running the show he was the only… Read more »

learn not to be so petty and judgemental

Texting type is against the comments policy. I’m with Dave.

Gervinho to be “tied up” today?

It doesn’t matter if he turns out to be a complete star/world beater, it’s just, well…….that forehead, man…….

SPAM ! You know when you’ve been Gervinhoed

DRAWN OUT!? Gervinho’s forehead is drawn out! Barca chasing Cesc is drawn out! It’s been weeks for the deal to pull through (and it may still be in the process) but with the Cesc and Nasri things this is hardly “drawn out.” Man U have been chasing De Gea for ages and have only just secured their own Spanish waiter.

My opinion is eat an onion

That’s shallot to think about!

I love your work, I really do. You’re peerless and provide an unrivalled top notch news service…….but….

How’s about an opening headline tomorrow of ‘Fuck All Happening Today Fellas’ or something similar, just for tomorrow mind.

That way I’ll know early doors that fuck all’s gonna happen, so I won’t get all bent out of shape when, well, fuck all happens.

Keep up the good work men.

finally. just get samba keep cesc and nasri and the league is ours. if not sell cesc for 35mill and get cahill , defoe or mata.

You missed out the best bit in the photograph.
shame on you

Is he any good?

I’m going to catch him by surprise while he’s walking into London colney and shave his hair off. He’s got quite a bad receded hairline bit black people can pull off the bald look quite well so I don’t know whats stopping him

Great another player with a with messed up hair style we don’t really need what about our shit defence mr. Wenger. When we get that sorted out we might actually win a game against the likes of the mighty Stoke.

How good is Arsenal at keeping deals quiet? L’Equipe knows F.A. about these deals. This is more apparent every day this does not happen–which leads me to a general observation.

Arsenal News is simply memorializing all the made-up, fantastical, hit-whoring B.S. that sites–while being respectable during the season–get up to in the summer when there is no match to cover.