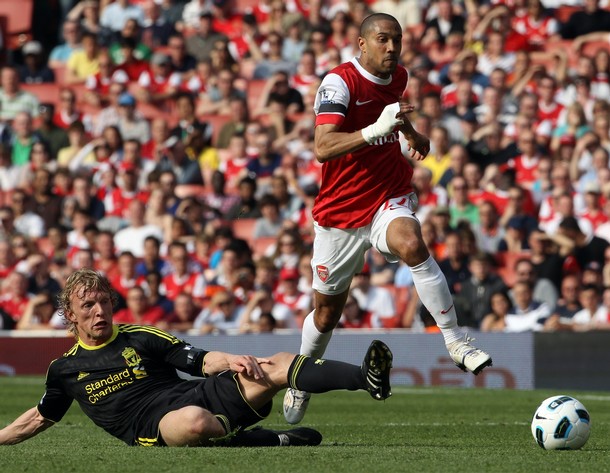 Reports last night across the British media claim that Gael Clichy has been the subject of a £5 million bid from Liverpool.

Kenny Dalglish is known to be on the lookout for a left-back ahead of the new season and is thought to be an admirer of the French international. While Clichy represents an attractive option for the Reds speculation abounds that Newcastle United’s Enrique remains the Anfield side’s number one target for the position.

In a game of brinksmanship it is now thought that Liverpool have leaked their interest in Clichy to provoke the Magpies into lowering their high asking price for the Spaniard. Having been held to ransom by Mike Ashley in January over the £35 million signing of Andy Carroll, new Reds owners Fenway Sports Group have indicated they will take a more stubborn line in negotiations this time around.

With only one year left on his contract, and having so far rejected the chance to extend his stay in North London on lucrative new terms, Clichy does appear open to life away from the Emirates. Nevertheless, with several clubs on the continent including Juventus, Inter Milan and Bayern Munich all tipped as potential suitors, the £5 million bid lodged by the Liverpool looks likely to comprehensively surpassed.

If Clichy does walk away from Arsenal after eight years at the club, Arsenal fans will no doubt expect to see Arsene Wenger sign an experienced replacement with question marks still surrounding the future suitability of England under-21 star Kieran Gibbs and Frenchman Armand Traore.

While Gibbs has been tipped for a bright future at the top of the game, his repeated struggles with injury hints that he cannot yet be expected to fulfil his duties on a week-to-week basis. Traore meanwhile came close to signing for Benfica last summer before opting to spend a season on loan in Serie A with Italian giants Juventus. Despite making his debut in 2006 his progress at the Emirates has been consistently undermined by lacklustre performances in the first team and he looks more likely to follow Clichy out of the club rather than replace his compatriot in the first team.

Everton’s Leighton Baines and Celtic’s Emilio Izaguirre have both been mentioned as possible replacements, although with suitors circling Samir Nasri and Cesc Fabregas the first concern for Arsene Wenger will be keeping his star players at the Emirates.

I don’t care where Clichy goes if we can replace him with Baines.

i think this is the most stupidest offer in the world. he was worth 20m for real last year and hes improved as a player but now worth 5m. kenny dalglish go and shuv that 5m right up ur ass.

High asking price for Enrique? That pretty much sums up what arsenal fans know about football!

I hope we will sell him but for something more then 5m. Replacing him with Baines is not a bad idea but given Wenger is interested in signing bot h Cahill and Samba then we have 5 CD and young Kyle Bartley, I dont even count Squillaci. Gibbs is too injury prone and we know nothing about Bothelo but acording to YoungGunsblog he had very good season playing left back or wing.

The fact is Enrique is twice the player Clichy is. Arsenal have arguably a better left back in Kieron Gibbs anyway. Newcastle would be mad to sell Jose to another side in the Premier League when the likes of Lyon, Bayern Munich, AC Milan and Barcelona are sniffing around.

I hope Liverpool end up with him after having to pay much more than £5M. Then we can watch him make numerous fuck-ups for the mugsmashers all season long.

Hi Lads…Newcastle fan here. I may sound biased but i think the two stand out left backs in the PL now are both Baines and Enrique. Jose oozes class for us; i would rather he saw out the rest of his contract with us and left on a free than go to liverpol. They have offered 4 million. What a pathetic joke that offer is. If they were stupid enough to pay 35 million for Carroll who is extremely injury prone even at this early stage in his career and then prepared to pay 20 million for a midfielder who… Read more »

I think it’s great when other fans come on here and offer their opinions on certain issues surrounding both clubs in a reasonable way. Fans of the same team tend to talk a lot of shite between each other. Are there any NUFC blogs where I can ask about us signing Enrique? Would he sign for us? is he good enough? Not been on my radar before..

Nice to see fans of other clubs coming here and acting like normal human beings. Glad to have you here Northern_Jedi!

No one player is ever bigger than the club. players come and go; the fans always remain.

This is very true.

Arsenal til I die

We have won nothing with these players in OUR team for five years. If they want out let them go.

Mate, good points about noone being bigger than the club. I respect another fan coming in here in peace and speaking sense. Arsenal can do without Clichy for sure. How many points has he cost us? I think he’s decided to slacken his attitude in defending this season and it’s shocking. Heard we’ve signed Gervinho already and things are looking up. There’s a really good read on this new blog on how good Baines is. Check it out lads and chin up with Nasri and Cesc! http://www.footballneutral.blogspot.com

Dirty kenny up to his tricks again, 5mil is a disgusting offer…echo the comments of splashing the cash on ‘overrated players’ but then offering peanuts for quality ones??

On a seperate note from a newcastles supporters point of view the only thing that stopped your guys from having a really good crack t winning the title was a solid centre half and if you get Cahill and Samba I think you’ll have a very good year. If you have a few mercenaries – get shot

Daglish is a pillock. I atleast Clichy should garner in about 10 Mil if not more. Anyway, I kind of want him to go. I want Gibbs to stay healthy and see him get some consistent first team action….but signing Baines or Izaguirre would be preferred

Ty, fair play to Dalglish trying to go low. He knows we ain’t gonna sell Clichy for 10 mil but Liverpool aren’t mugs anymore. They only signed that Henderson kid for £13 mil and wanna start low before going higher. But £5 mil is taking the piss though. Gibbs is in a similar place to Clichy was when Cole left. Cole left to a rival in the same league, Clichy stepped up. If Clichy wants to leave to a rival in the same league, Gibbs will step up. Baines is my shout for the position tho. Might cost a bomb… Read more »

I like the idea of Baines. But, we’d need to pay at least 15 mil for him and I’d expect Wenger to hold out for at least 10 mil for Clichy.

Newcastle fan here , agree with Northern Jedi’s point about no player being bigger than the club. Let Clichy go, definitely not the attitude you want from a player at your club, us Geordies know all too well about mercenaries in our team. He’s a player Arsenal could replace, Izzaguire, Baines (depending on Everton’s price) or even Enrique, (be gutted if that happened) although we seem to be holding out for a big offer and Wenger won’t want to pay a huge price for him. I think with a few good additions to your squad, mainly a quality central defender… Read more »

Liking the new website very imformative. Dont care if clichy goes he hasn’t been good for a whlie now.

Why is that when an Arsenal player is in the last year of their contract their value goes down to nothing Clichy 5 million, Nasri 10 million…. but if its a player we’re interested their value goes up? Are we that shitty of negotiators?

[…] Last week Clichy was heavily linked with a move to Premier League rivals Liverpool following suggestions that the Reds had offered £5 million for his services. Despite the fact the 25-year-old has only one year left on his contract at the Emirates it is believed that enough potential suitors are interested for Arsene Wenger to hold out for a figure in the region of £8 million. […]

Wenger: We have started talks with Clichy | Arseblog News – the one stop Arsenal news site

[…] 25-year-old has been speculatively linked with Liverpool, Paris Saint Germain, Bayern Munich and AS Roma in recent weeks after appearing to stall on an […]