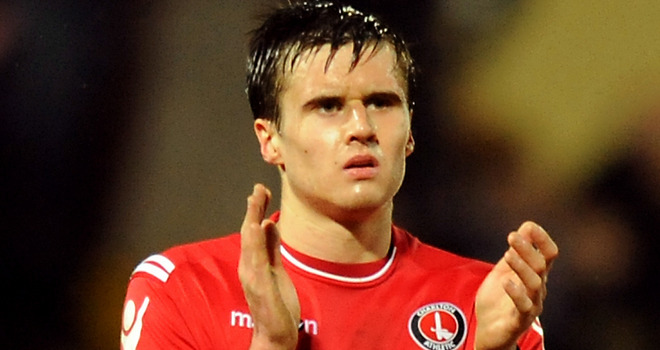 New Arsenal signing Carl Jenkinson has conducted his first interview since joining the club from Charlton Athletic and shed light on his long-standing love for the Gunners.

Speaking to ArsenalPlayer, the 19-year-old right-back, who looks likely to provide back-up at right-back for Bacary Sagna, revealed his happiness at signing for the club he and his family have always supported:

“It’s amazing really, words can’t describe how it feels if I’m totally honest with you. Being an Arsenal fan as well it’s an amazing thing for me and something I’m really excited about and over the moon about.

“My dad has been a season ticket holder for 40 years and going regularly since he was a kid. He brought me up as an Arsenal fan an I’ve been going since I was young, I’ve even been going to matches this season. The whole family are massive Arsenal fans. It’s all a bit surreal, but it’s a brilliant feeling to be here and very exciting for me.

“Being a fan is the massive pull, Arsenal is the club I’ve always wanted to play for. The club speaks for itself, it’s a huge club and I’m proud to now be a part of it.

“Arsene Wenger gives young players a chance and that was a main reason why I wanted to come to the club. Obviously it’s up to me to do well and prove myself, but I know that if I do that I’m going to be given a chance. Hopefully I can go on and stake my claim.

Asked to name his favourite Gunner of all time, Jenkinson disclosed his admiration for one of the club’s most loved players:

“I was always a big fan of Tony Adams; I’m reading his book at the moment.  He was always someone I looked at as a great player and a great leader. He’s probably my favourite.

Reflecting on the prospect of following in the footsteps of his hero Adams, as well as other members of Arsenal’s famed back four including Martin Keown, Lee Dixon and Nigel Winterburn, the Finnish under-19 captain continued:

“Those players are legends aren’t they. It’s a big challenge for me and one I’m looking forward to. Obviously they are great players and they are players I can learn a lot from. I’m looking to follow in their footsteps.”

While Jenkinson has predominantly made a name for himself playing on the right side of defence, the player admits that he has the versatility to play across the backline.

“I’ve played a lot, during my youth team days, at centre-back, but slowly right-back has become my main position. I’ve always felt I had more to give. I like to get forward and help attacking-wise. I think I played six games for Charlton last season at left-back as well, so I’ve played all across the backline and before that even in midfield.

“I’m quite versatile, although sometimes that doesn’t work to your advantage as you want to be in your main position. It’s good for a manager I guess when one of his players can play in many positions.”

Always good to have players who support the club. Now it is just the matter of which he is good enough. Hopefully he will be in the team for years to come.

everyone is excited that we got another 19 yr old boy or man with no experience. by the time he becomes really good, he would be fed up with arsenals inability to win a trophy and desire a transfer as it is the trend just like cesc, nasri, hleb, etc. when will wenger learn? where was he when man u signed chicarito? when pool signed suarez? caroll? nothing against this lad but we nid experience. arsenal right now is like the former ajax. a training school to prepare talents for bigger clubs.

it’s early days yet! god some people are so impatient i dunno why they follow football!

Good to sign someone with real enthusiasm for the club. Hope he does well and goes on to become a legend

ive heard from a reliable source that Ever Banega of Valencia is being considered for our midfield as a replacement for the outgoing Denilson. He has the ability to fit in a defensive role and his passing rates last season in spain were awesome. (and on youtube it shows unlike denilson, thats not because he passes sideways)
anyway my source tells me we have made an enquiry and his agent is now demanding clarification on the players squad status.

Is it wrong that one of the things that pleased me most in this (generally pleasing) piece is that he’s currently reading a book? OK, Adams’ biography isn’t up there with Ulysses but a book nevertheless. Hurrah.

Welcome aboard Jenks!
So we got ourselves a reader eh? Dangerous.
Lad looks like a cross between David Arquette
and Pinky from Pinky and the brain.
Up the motherf*ckin’ Gunnerssss.

Perhaps he should start up the Tuesday club again….

It’s guys like this we should be signing – who want to play for Arsenal and proud to wear the badge!

I just got a lot more excited about Jenkinson by reading that. Great to see that he has such enthusiasm for the club. Can’t wait to see him in action

I can’t stop singing Pinky and the Brain to myself now. I think either of them would be more effective than Squillachi.

This is exactly what the club has been missing. While he may be caught between Finland and England, he is still English in some capacity. He understands the responsibility to hone an Arsenal shirt and fight for what the club stands for. It’s even better that this kid will be an understudy to the most committed player in the squad, Bacary Sagna. Best of luck to the boy.

This is the type of player that the fans respect. Puts players like Nasri to shame, Jenkinson is proud to where the shirt and we’re proud to have such a lad as a Gooner. Good luck to him.

Wenger: Jenkinson is a player with great talent | Arseblog News – the one stop Arsenal news site

[…] To read Jenkinson’s comments about signing for Arsenal, click here. […]

An actual Arsenal fan. Great!! Now I can easily disregard the fact that he is 19. Besides, this just means that Sagna will become even better and more committed to producing great displays since he now has someone competent competing for his spot. Eboue does not count 🙂

[…] will ‘add depth’ to the squad according the boss, but who is also a rare beast indeed, a real Arsenal fan. He said: Being an Arsenal fan as well it’s an amazing thing for me and something I’m really […]