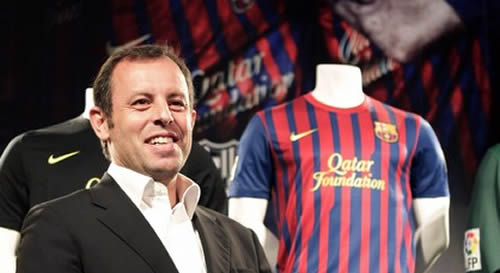 Barcelona president Sandro Rosell has given Arsenal’s chances of keeping Cesc Fabregas a further boost by ruling out a bid greater than the one they made last year.

Speaking at a press conference, Rosell said when asked if Cesc would like to join, “Who wouldn’t like to join us? A lot of players would, but we won’t go mad and throw everything at signing him.

“We’ll see what happens on the transfer market. Initially, we have €45m but we might use part of next year’s money too”.

And speaking specifically about Fabregas he said, “Last year we offered €40m for Cesc, this season his value is less. What we can offer will also depend on his salary”.

With Arsenal’s valuation of their captain at £50m, and Barcelona’s offer of just €30m the only one reported so far, it seems that unless the terms are seriously improved then Fabregas could well begin next season with the Arsenal. It remains to be seen if the Gunners are open to a cash + player deal which would suit the Spanish champions. Seydou Keita has been mentioned as a possible makeweight.

Yesterday Cesc said that although he was frustrated at not winning trophies he was happy at Arsenal. Arsenal fans will hope that Barcelona continue to undervalue their captain.

Andy Carroll £35 million…cesc €30 million
Do me a favour Rossell!! Twat

Someone involved in Barcelona being a cunt? Shock horror.

“Last year we offered €40m for Cesc, this season his value is less.”

Uh, no it isn’t. His value is anything Arsenal Football Club want it to be. Pay up or shut up.

€30 million won’t even get you modric!

Joke of the century!

Honestly though, what a bunch of cocknockers. Why doesnt anyone in the press point out their idiocy? We should all be pointing and laughing.

For such a great footballing side Barca have no class! Just because of there name they think they can offer 40% less than the value of players! Who the fuck do they think there fooling! Cesc should look at that and think do Barca really want me?? He has 4 years left on his contract and Barca think he is cheaper this year! He is our player so we’ll decide if he is cheaper or not!

What a cock. I swear he’s called Sandra? Even more of a cock.

Is Cesc contracted until 2014 or 15? I’d rather keep him until his contract finishes and let him leave for free than sell him undervalue.

Pay up or shut up. Just hope they don’t do what they did with Henry and sell him for half of what they offered the year before.

Come on you reds.

i think cesc has realised that baca re not going to break the bank to get him. hope he gets stuck in nowand carries the team forward onto greater things. were so close…arsenal forever

Cash plus players, Messi, Xavi………. As I said last week.

Exactly what i was thinking.

I love the way he says Barca won’t throw everything at signing a player, then casually adds how they might spend some of NEXT year’s budget on players.

This man is a puppet, and a brainless puppet at that.

“Last year we offered €40m for Cesc, this season his value is less. ”

Well Sandro, as we rejected that offer last year, his value was clearly more than what you offered and your valuation is wrong. If his value has somehow lessened in one year, how does making a proportionally lower bid this year make any sense? That just means you are equally off the mark this year. What arrogance, it’s like he thinks he is doing us a favour by taking Cesc off our hands, as if Cesc is a broken down used car or something.

the man’s basically said Cesc isn’t as good anymore, bet that made him feel wanted… looks like he’s staying to me

You know I’m actually starting to think Cesc may never get his return to Barca, the club dont value him as highly as Arsenal do and Cesc himself is starting to sound frustrated with the whole saga. I’m sure in the backround he was being advised to go public and force a cheap move, the fact he done the complete opposite really shows how classy the guy is. If we were winning trophys he would be very happy to remain here long term.

“wear and tear”….what is he a sofa.
Barca really are a joke.They want to buy a ferrari for the cost of vw golf.I think Cesc should look at this and be really disappointed at how little they seem to want him.Anyway,good news for us me thinks!

“Last year we offered €40m for Cesc, this season his value is less. ”

He’s absolutely right … however the complete sentence should read:
“Last year we offered €40m for Cesc but his value was 100m. This season his value is less, its 95m.”

The only way Cesc’s value is less is if there is a growing risk that Cesc will not sign another contract with Arsenal. But then we have him for another, what, 5 years? If Barca will only pay the amortized value thinking he won’t sign again for Arsenal and won’t play anywhere else but Barca, then that is fine with me. They can have him in 2016. (We’ll see if Rosell is still around by then to claim credit.)

I cannot believe this. Can we just tell him to fuck off? Who the fuck does this cunt think he is?

Don’t mince your words,just say what you feel mate ! :0)

Ah, the sneaky wear and tear ploy, first articulated in Sun Tzu: The Art of Transfer Negotiation and Generally Being a Cunt. Used here to devastating effect no doubt. Especially as Cesc’s gifts (speed, agility, 36″ thighs, vertical leap) will surely depreciate with age and London smog. Rosell is privy to all this, having unique access to a 3 dimensional 2 foot high mock up of Cesc’s DNA developed from stem cells from his placenta stored in the bowels of Cataloonia Maternity Hospital then transferred to La Masia and subjected to manifold testing and analysis. Aren’t Barca just a wee… Read more »

Sun Tzu: The Art of Transfer Negotiation and Generally Being a Cunt

You, sir, win one internet.

I wonder what the Barca fans think about this whole deal. I know they are furious with us refusing to sell, but now when we say pay up or shut up it’s all on their execs. I hope this blows up in their face and fans become furious with the cunts who have been calling for the Barca DNA to return home.

I would love for the club to simply hold a press conference holding Barca to task over their obvious flaunting of UEFA regulations regarding players under contract to another club. If anyone should be hit with transfer bans, it shouldn’t be Chelsea (even though they’re still shite for having John Terry…), it should be Barcelona. However, since UEFA is as corrupt as FIFA, and they’re in love with the continental clubs, particularly Barca, so nothing will ever happen. That said, Rossell and the rest of the players, executives (and dare I even say supporters?) of Barcelona FC are fucking wankers.… Read more »

You’re going a bit too far calling their supporters wankers aren’t you?

No, I don’t think so. They act holier than thou regarding everything, simply because the majority of them are fairweather fans who jumped onto a bandwagon. Ask them which club they like in England and you’ll get “Manchester United.”

Of their own? what time are u on stage? Is your show called ‘ Danger, I might make u laugh’? Next you be saying cesc’s DNA is barca. Wenger didn’t steal him, he chose to come to arsenal at a very young age to play. Lets be honest, cesc will do better to stay here for at least another season as chavy will then be 33. Barca are scum. Don’t get me wrong they are the best team in the world, but they are also the biggest cunts since john terry & wayne rooney! They lack class…fact! when you say… Read more »

Spaniards – don’t understand business/ economics. It’s not their strong point. country is on it’s knees. Hopefully they’ll just continue to build more houses nobody can afford, the country will default, they’ll go bankrupt and Spain will cease to exist.

[…] Sandra Rosell has been speaking about Cesc. At a press conference yesterday he revealed that they wouldn’t ‘go mad’ trying to sign our captain and suggested that this year his value was less than it was last year so they would bid […]

We have made him the player he is. The step up from trainee to a first team player is a massive step and we footed all the bills for his transition into the first team and development. He learned under the wings of our Invincibles. i understand why he wants to go to barca and all this talk of his ‘heart is not at arsenal’ is nonsense. he knows exactly how important Arsenal was for his career and i am sure he will give 100% wherever he plays next season. he’s a top, top professional. HE’s WORTH WHAT WE SAY… Read more »

i dont understand arsenal fans ur team is full of losers the club didnt win anything for 6 years and they dont look like they gonna win anytime soon, buying from arsenal is just like buying from stoke city, we only saw fab play yes he’s a great player but u have to win titles to be named the best, then only he’s worth all the money in the world, for now 30mil is just too much for him

If 30m is too much for cesc then dont buy him that simple. The reality is your little 3rd world country is skint and you absolutely done your conkers on ibra. Then we look and see your willing to pay silly money for rossi. Lets be honest, barca think they own fabregas. Pay 45-50 m and hes yours but you know as the old adage goes, dont touch what you CANT afford.

Barca don’t even need cesc so why don’t they shut the fuck up. simples

barca wont pay that much for a player of their own, wanger steals players from clubs n he think he’s the one that discovered them, we need our player bk coz the bench is empty we need someone to replace xavi when he’s resting

Last summer, I suggested a sum I found appropriate for Barca to pay us for Cesc. I still think it’s a good sum for the player we have no intention of letting go of, and considering how Barca have behaved regarding this whole mess. If they pay the stadium debt, he’s theirs. Until then, they should just go away.