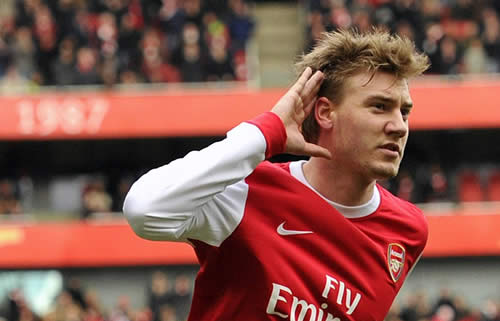 Nicklas Bendtner’s agent, and father, confirmed that German side Dortmund and Portuguese outfit Sporting Lisbon are interested in signing the big striker.

Speaking to Sporten.dk (Google translation) he said “There is interest from several German clubs for Nicklas and I can confirm that Dortmund are interested in buying him. I can not get into whether there have been negotiations between Dortmund and Nicklas or Dortmund and Arsenal, but just say that Dortmund has approached.”

He went on to say “I know that Sporting Lisbon have been in touch with Arsenal with a concrete bid for Nicklas, but then I do not know whether Arsenal have rejected or accepted the amount. I have not heard more than that Sporting have bid”.

Bendtner made his desire to leave Arsenal clear at the end of the season and with the club linked with a number of forward options recently his departure would be no surprise at all. Dortmund would most likely be the favourite option as they can offer guaranteed Champions League football.

I still think that we might regret this in the long term. He is worth keeping if he is played as a central striker.

Totally agree. I just keep remembering how he almost single handedly ensured our 3rd place spot in the 2009-2010 season. All those late goals. Played at his favored central forward position more regularly he can perform well, I hope we dont regret this.

Exactly. He is never going to be the most technically adept player but as that run in 2009-10 showed – he scores goals.

I agree. Bendtner might not be the best in the world but he has attitude and that is lacking in the team.

we wont regret it, Bendtner needs a team to play around him. At Arsenal we need a player to play amongst each other

Andrew, I see what you mean but don’t you think in that case we should abandon the idea of playing with one striker? People will point to RVP as proof that a more complete player can prosper in that position but he is a rare breed.

it Wil b somewhat ironic if dortmund sign bendtner, & le boss switches back to the 4-4-2 next season as it would’ve suited him!! bendtner has been played out if position alot this season, & still bagged a nice few goals regardless, I’m not a fan of his, but I do wonder what he’d have done in a full season in his true position. Still if we get £12-15m for him it’ll be nice business indeed.

Bendtner will become a great striker, we just can’t afford to play him.
he is too clumsy, and when he gets older and fixes his shortcmings he will be the niklas we would have wanted.

B52 will be a good striker in the future but he needs to play regularly in his favored position, and to be honest he’s not going to be first choice at Arsenal ahead of RVP and Chamakh. I like him, he’s a natural goalscorer but he just needs to play to stay sharp and score more. He’ll fit in great at Dortmund and Germany, I’m sure of it. I’m sad to see him go, but he won’t get any better by sitting on the bench at the emirates every week.

I think he’s a better player than Chamakh, to be honest, but I think a parting of the ways is probably for the best. I reckon he’ll score plenty of goals in his career.

[…] being linked with Turkish side Galatasaray while Nicklas Bendtner’s father has confirmed that Arsenal have received bids from Sporting Lisbon and Dortmund for his son. Two reasonable options for Bendnter, in fairness, and you’d have to think […]

Whoever thinks we might regret this is off his knocker.

We’ll need to burn you a copy of his fantastic world class first-touch of a world class striker after receiving the actual world class Jack Wilshere’s pass against Barcelona that should won us the match and progressed past the whores of Cesc.

That was the moment when what little faith I had in Bendtner evaporated. And I think the big reason Wenger refused to play him in the middle was his first touch of a cinder block (still insane to stuff him on the wing though). He’ll always score goals but being a striker is about a lot more than that nowadays, especially in this particular Arsenal side.

And to those who say we should keep him, I’ll ask you this:
What does Bendtner offer the team when he’s not scoring?

I lost faith in him the previous season against Barca when he WAS getting a run in the side. He looked ponderous and a bit slow and uncreative. Chamakh is less ponderous and less slow, but also a bit less creative. Once fullbacks stop showing Bendtner inside on this right foot he’ll be next to useless out wide. Perhaps we can bring on Samba instead?

He won’t be missed. that is not to say thathe will not be successful. His style of play does not suit us. We do not use a target man. For teams that does he would be good choice.

I want big Nick to stay, I hope he does. Denilson, rosicky, vela, Almunia, flapihandski, Eboue and squilacci can all go for all I care but big not Bentdner, he scores too many crucial goals.

He offers plenty. He can hold the ball, control the ball, pass the ball, hit the ball crisply he has a touch that’s needs improving agreed. Also he has tons of confidence. He has a place at Arsenal

Are you Thomas Bendtner in disguise???

hold the ball/ control the ball/hit the ball crisply?? That’s so hilarious that my insides are hurting!

How come Chelski spent 50 mil on Torres and didn’t come in with a super steal of 25mil for Bendtner????

You lot are crazy. I’ll do one better and post the link of your world class Bendtner and see if you can imagine any other world class striker can totally waste this chance that should send Arsenal past the whores on away goals.

yeah,like RvP could easily score,only if he hadn’t got sent off kicking the ball away(not anywhere near the post anyway) earlier.Now that was a smooth move

Blogs, am amazed you say Bendnter is better than Chamakh!!!!! Chamakh was great first half of last season (fairly consistently) and can actually keep the ball and find passes. Chamakh had a decent first season and would have been better if he hadn’t have been overlooked due to the whole affair.
I think Bendtner may come good, but we’re not short on future prospects so if he can provide ££ to buy someone that’s already firing on all cylinders, so be it.
That video Gordon posted makes me want to cry. Oh what could have been.

Bendy could have been a legend at the arse but for that mahoosive head!!! Means his balance is all over the place! Plus he’s a giant plank

I’d take Bendtner over Chamakh all the time, Chamakh’s decline at the turn of the year was shocking, even for a first season in the premier league.

Dortmund will want to keep their team together so I guess a swap deal involving Subotic is out.

Whilst I’m not his biggest fan you have to recognise he did score goals (and miss plenty) in his only decent spell as central striker. However he just doesn’t put in the effort needed. I do wonder if he is being coached properly, he needs someone like Alan smith to teach him. I would be surprised if he ends up like Kloser, awkard but acheiving alot in the game.

Sell him. His attitude and overvaluation of his own ability doubtless lead to laziness in training (hence the misses). If he could actually play at the level he thinks he’s at, he’d be worth keeping.
Although, since he’s on such high wages with us now, offloading him may be difficult. Perhaps we can con Man City into buying another lanky, shite striker from us for 25 mil?

Take it. He’s not the answer.

[…] linked with the club. Apparently Arsenal watched him at the recent European Under 17 Championships. Nicklas Bendtner has apparently been the subject of a bid from Sporting Lisbon where he would form a frontline […]

[…] father, and agent, Thomas Bendtner, claimed earlier this month that Sporting Lisbon and Borussia Dortmund had interest in the player. Both teams have subsequently, and categorically, denied […]

[…] ‘advanced stage’. Those of you who read Arseblog News will have known of this interest weeks ago, although both clubs have since denied wanting the big Dane. As I said yesterday I would be […]

[…] London and negotiate his move away from the Emirates. Despite reported interest from the likes of Borussia Dortmund and Everton it appears that Sporting have stolen a march on their rivals by laying down suitably […]