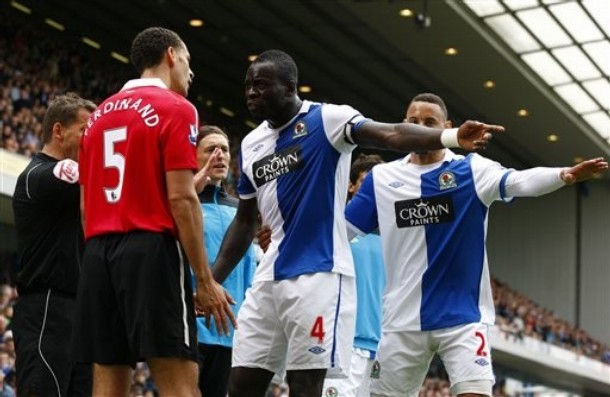 Blackburn Rovers manager Steve Kean has made clear that he is under no pressure to sell Christopher Samba despite speculation mounting that the centre-back is on a verge of a £9 million move to Arsenal.

Arsene Wenger is known to be on the lookout for new defensive recruits as he looks to strengthen a back-line which leaked 43 goals in the Premier League last term.  Nevertheless, denying a deal for Samba was on the cards with the Gunners, Kean told Sky Sports:

“We don’t have to sell him [Samba]. He signed a five-year contract in the last window. He’s one of the players we would like keep.

“We’re going to try and hold on to all our good players.”

Reflecting on the deal which took England under-21 international Phil Jones from Ewood Park to Old Trafford, despite Arsenal also having a bid accepted, the Rovers coach continued:

“It was difficult with Phil because he got the opportunity to go to Manchester United and he wanted to play Champions League football now and we’re not there yet. I’m sure we will be in the next three or four seasons.”

Blackburn champions league football ! He been on the sauce again………

Perhaps Samba also wants Champions League football. He’s got more chance of that with Arsenal than with Blackburn.

Oh dear, looks like steves been licking those Windows again

Hanging out with Shawcross, licking windows, breaking legs, breathing out their mouths… you hassle him, that what happens…

“It was difficult with Phil because he got the opportunity to go to Manchester United and he wanted to play Champions League football……..” ..oh…And I suppose Samba isn’t interested with CL football……

Sign the dotted line SAMBA son and come to where football is real football, the mighty Emirates whoop whoop!

If Samba knew of our interestin Jan, why the fuck sign a new 5 year deal!!!

Jin
Reply to  Fed up of Barca

Fed up of Barca
Reply to  Jin

I suppose his logic was that he has no idea wether or not our interest would materialize, so it made sense to sign a massive deal while Blackburn were still afraid. Now if we really want him we have to cough up.. not his problem

I couldn’t give a damn if he isn’t that good a player, considering how good our current centre halves are anyway (bar Vermaelen); I’d just love to see him give our team a bit of intimidation.

I bet you Jenkinson will be our last signing this summer. Anyone wanna take the bet?

Is there anyway we can classify ^^^ Paul as a spammer

Quote ” ……..he wanted to play Champions League football now and we’re not there yet. I’m sure we will be in the next three or four seasons”

Despite all teh shite and negativity around my beloved Arsenal at the moment that little snippet I heard on the radio today almost made me piss myself ! Fuck me there are some seriously misguided twats associated with this game.

Lots of huff, puff and promise. No end product.

Just like Cesc situation. Blackburn are under no obligation to sell but if Samba has ambition to play for The Arsenal; as he’s quoted,. and we fix nice price for Black of Burn then job done. Still think Cahill is worth talking about.

Also major patience needed. Deals are never done with the press in the rooms. Yet we buy into every little morsel of gossip to keep hope alive. Its like Chinese fucking whispers most of the time. Sports journalists having to fill copy…. and we listen to any old concoction. Patience…keep the faith

That said more than likely we sign Gervinho as official reports have stated we are in talks.

Arseblog … an Arsenal blog | The past, the present and a capital idea

[…] such as they are, of signing Christopher Samba have taken a setback with Blackburn saying they don’t need the cash (what with the millions off United for Jones), […]

But he has Arsenal DNA! His dad visits london all the time! I talked to his aunt myself, she said red has suited him ever since he was a boy!

[…] Yesterday Rovers boss Kean made clear that he was under no pressure to sell Samba having already offloaded 19-year-old Phil Jones to Manchester United for £16 million and with the club’s new owner eager to see the club push up the table. […]

[…] speculation involving player arrivals, Blackburn’s Indian owners have told Arsenal that they don’t want their money. This news is a major setback because the media Vultures and gooners alike have heralded Samba as […]