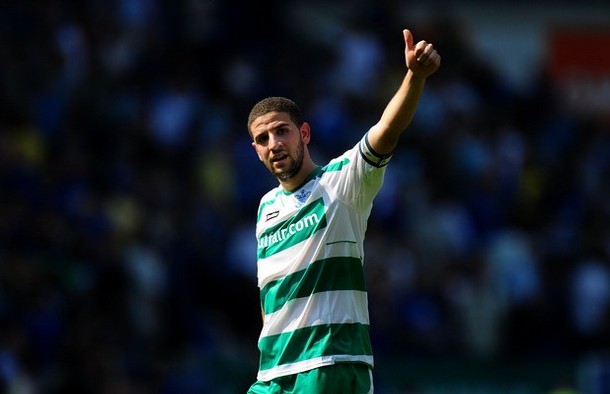 Moroccan attacking midfielder Adel Taarabt has revealed that Arsenal and Chelsea have contacted Queens Park Rangers about his availability and both been quoted a £10 million figure to secure his services.

The Championship player of the year has long been linked with a move away from Loftus Road but with Neil Warnock determined to keep hold of his talismanic captain it appears a scrap could be on the cards before the start of the new season.

Speaking to French publication L’Equipe about his future, Taarabt spoke openly about the apparent approach made by representatives from the Gunners and the Blues before stressing that with QPR aiming to push up the Premier League he would be happy to stay in West London.

Asked if he knew where he would be plying his trade next season, the 22-year-old stated:

“No, not yet. QPR demanded £10 million for me, and for now, the clubs do not move too much.

“I had contact with Arsenal and Chelsea, but it’s a little messy as Arsenal have not sold Fabregas..As for Chelsea, they have yet to coach…We’ll see.

“In any case, I would like to stay in London is the best city in the world. Stay at Queens Park Rangers? Why not. When I talked with the coach, he told me that the club would seek the top eight. For our first season in the Premier League, it would not hurt …”

It is not the first time that Taarabt has spoken publically about a link with Arsenal. In March last year the mercurial talent annoyed then owners Tottenham Hotspur by publicising his frustration at not moving to the Emirates when he had the chance.

“I was going to go to Arsenal and Comolli was there with Wenger,” said Taarabt.

“But he went to Tottenham so I went there. That was a big mistake for me. My friends in England — like Armand Traore and Abou Diaby at Arsenal — told me Tottenham were not the right fit for me.

“The big mistake was to sign for Tottenham and not go to another club when I first came over.”

Bleh. Not worth 10 million.

I’m sure there’s space for him even if fabregas stays.

meh. Do like his dig at the spuds though!

He makes it sound like we’re waiting to sell cesc before we bid.

I wish he’d have talked his friends into joining Spurs with him instead, that would have saved us all some heartache.

Diaby could have supplied his own shirt to sweeten the deal, apparently.

Hmmm, thinking a better calibre of player really. He’s high maintainace also, can see Wenger kicking him square in the nuts with all of his tauntrums.

It’s always a mistake to go to Tottenham. Even if it’s just for an hour or so.

Instead of these attacking midfielders, I’m impatiently waiting to hear rumors for a defensive midfielder. That is a spot that really needs more depth.

I bet you Jenkinson will be our last signing this summer. Anyone wanna take the bet?

Thanks for the reverse jinx Paul.