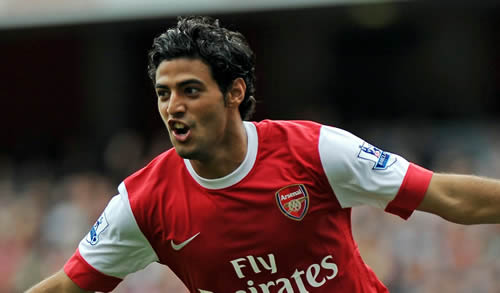 The exit door opens for yet another Arsenal player this summer and this time it’s Carlos Vela.

The Mexican was sent out on loan last season to West Brom but despite two goals early in that spell he had a disappointing time overall.

Reports in today’s Turkish press (via the Mexican press – Google translation) suggest Galatasaray are monitoring his situation, and although their first choice is former Arsenal man Jose Antonio Reyes it is believed Fatih Terim has already made contact with Arsenal about Vela’s availability.

Vela has also been linked with newly promoted Swansea City who tried to sign him on loan last January. He signed a new long term deal with Arsenal in December 2009 but is another of Arsene Wenger’s youngsters who have failed to live up to their early promise.

He failed to start a single Premier League game for Arsenal last season and made only six starts from a total of just twenty-one appearances for both clubs.

Vela is a classy player, who deserves more than the Turkish league.
Hopefully he’ll get more opportunities next season.

if doesn’t play regularly for Arsenal, then we will never find out how good he is. IMO he is class and if he had as many chances as some of the other players, he would have proved himself. A loan spell in a struggling team is not a way to judge a striker, they need chances to score.

With RVP, Chamahk and possibly Gervihno, where does Vela fit in our 4-3-3? I think he is a good striker but sometimes things just don’t work out for a guy and his club. Same thing goes with Mick B

He’s better suited to a 442. It’s only worth keeping him if we plan to vary our style of play.

He’s never going to get a chance at arsenal, if Galatasaray want him then I think it’s best he takes that opportunity

Offload him as part of a player exchange with Galatasary for Arda Turan.

It’s very simple, if vela was adjudged to have been good enough, he would have forced his way into the team, look at jack? but vela has not lived upto his potential, if he was hungry enough he’d have made a starting place his own. the fact is slot of our young “wonderkids” are too well paid, for producing so little. look at Velas mexican team mate Hernandez? one season in England and has taken it with both hands, why? Simple,.. Hunger desire & most importantly heart. the “wonderkids” at our club would learn a lot from his example. but… Read more »

thats bulloks the guys class and if he was English like jack and theo he would have been playing in our first team long time. I lost count of how many times i saw him chip an outrushing keeper, you don’t do that unless you have some quality! The problem is wenger and his fuking 451 formation, vela can’t play up front on his own, and he’s not a fuking winger either. I will be pissed off if we let him go without giving him a proper run of games. Even though he’s not a winger I think given a… Read more »

Before any other prick comes here and says he’s rubbish go on youtube and actually watch what he’s done for us when given the chance. It’s that twat selecting the team that needs to go simple!

To the guy above, YouTube could make Almunia look like a world beater. We all know Vela’s not good enough for us, good luck to wherever he (hopefully) goes.

If Arshavin goes then keep Vela, if the Owl stays then it’s better to let him go and not destroy his career any further…

i can imagine him doing quite well away from the EPL. he’s a good player who needs consistent time on the pitch, but doesn’t seem particularly suited to the game of the prem.

Re TH14, firstly I am not a prick, secondly, I don’t watch my games on YouTube, I watch them live, & I’ve seem enough of them with vela in the team to know that vela isn’t good enough for arsenal. if he was, he’d be in it week in, week out, He has had his chances to stake a claim for his place, to prove himself, but he’s never really done it. he has had a handful of good performances in the cup games, & against lesser teams, but let’s be straight here, Carlos vela isn’t arsenal quality, if he’s… Read more »

yeah some fair points there mate u don’t sound like a prick at all! I just hate when some of these so called fans come on these blogs and dis our players for no reason. If you check it mate Vela was not given the chances at all by wenger. He played him in the Carling Cup and he couldn’t stop scoring, then instead of wenger starting the guy in the prem he kept bringing off the bench, expecting some miracle in the last 20 min. Now for a player to be at he’s best he can’t be coming off… Read more »

And wilsy the youtube comment was aimed to anyone who has forgotten how good he is, I don’t need to watch that shit I know he’s class. Everytime i’ve seen him start a game he’s impressed me. I’ve been so pissed off over the years with how vela’s been treated by wenger seriously it’s a fukin disgrace. How this guy gets paid £7m and can’t pick a fuking team is beyond me. I just hope this articles bullocks!

He’s a serious party animal anyway! We have no need for him…he only scored against rubbish teams! Goodbye Carlos
Denilson next please

I think Vela has had plenty of chances, to be honest. Has flashes of excellence but no more than that. If he can’t even make the West Brom team it’s probably time to say goodbye.

What do you know ArseBlog? Your not the manager so shut up you mug.

Vela is rubbish. I never understood why he was given a 6 years contract. He is too weak to play in the prem and spends most of him time on the floor. Yet another waste of time and money.

This is the problem with Arsenal, it is not everytime that the 4-4-3 formation will work for us, there are some games when we will need to play the 4-4-2, so in such games we will need Vela. I think the reason why we have not won anything all these while is because we are narrow minded, we need options, not just options but a lot of options. I don’t believe we have to allow more than 4 players to leave because we need a big squad.

Vela is not for sale: agent | Arseblog News – the one stop Arsenal news site