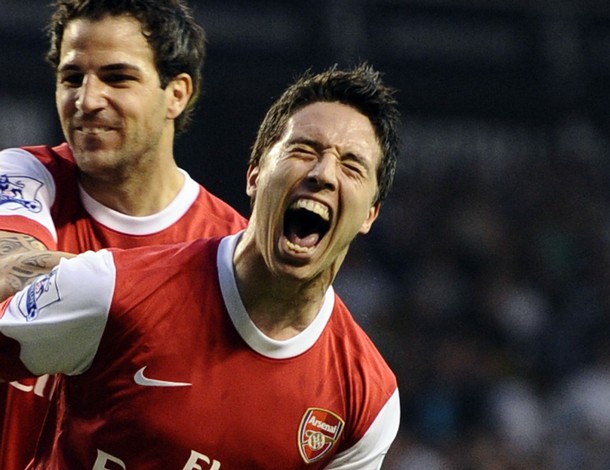 Arsene Wenger looks set to battle hard to keep both Samir Nasri and Cesc Fabregas as he attempts to keep together his young Arsenal squad in the face of interest from high profile suitors.

Nasri, who has only one year left on his contract, is playing hardball with the Gunners board as he attempts to negotiate a significant pay rise, while club captain Fabregas is once again thought to be the subject of attention from childhood club Barcelona.

Having spent nearly £16 million securing Nasri’s signature in 2008, Wenger made clear that the former Marseille man should recognise the improvements he has made in North London with help from the Arsenal coaching staff.

“We will do everything to keep Nasri at the club. My wish is that he stays here,” Wenger said in The Sun.

“If he looks back he can see that he’s come quite a long way with us, and I think there is still a bit to do.

“It’s the club that makes the player’s career.”

Last summer Arsenal stubbornly resisted two formal bids from Barcelona for Fabregas and while interest in the Spanish playmaker appears to be less strong this time around, the Frenchman made clear that he was not about to let his protégé return to the Nou Camp anytime soon.

“I will be pretty clear about this. For me, Fabregas is with Arsenal for a long time and he will stay with Arsenal.

“It sometimes happens that the rumour can make the transfer.

With rivals Liverpool and Manchester United already spending big this summer, Wenger also recognised that with new financial regulations on the horizon he expected a great deal of money to change hands before the start of the new season.

“Next year will see the introduction of the financial fair play system, which will limit the big transfers.

“I think this is the last year that the summer will be hot – very hot.”

Maybe with a few quality signings that will convince Nasri and Cesc to stay. Am not totally convinced we’ll keep cesc tho and with the Nasri situation it just reminds me of the adebayor transfer!!!

I hope that when Arsene gets his cheque book out that he buys wisely. One solution may be to keep nasri and sell Fabregas. It may be that it is this year that he goes rather than next year. Nasri would get his central role that he wants and the club can start planning for the future with ramsey to come and alex chamberlain perhaps. The biggest problem will be to shore up the defence and defensive midfield positions. It may also be that the club needs a top class goalkeeper, who will command his area better than chesney. He… Read more »

Adrian- Agree with sticking Nasri in the middle but I can’t see Cesc leaving this season. Barca don’t have the money. I do fear Cesc could have a bad season coming up now. Maybe a lack of desire and impatience with the clubs trophyless streak and refusal to sign big names make an impact on his mentality. He’s had a difficult season with injuries too. I hope his performances don’t dip, of course.

Get rid of Nasri no player is bigger than the club and putting a gin to our heads will not do him any favours end of story. Spend some of the fans hard earned money on a team that want to win. Bring in players that will command and help us play the football we all love week on week not just when the big teams turn up.

Where do the people like Nasri go when its wet cold and raining in Bolton ?

Should be Gun but a Gin will do 😉

As a Liverpool fan, I don’t see what the problem is at Arsenal for the summer transfer market. Nasri’s supposed comments were made in March, Fabregas’ departure has always been on the cards and all the other potential player departures are either squad players or players who have dropped off.

Hasn’t Arsene said he’ll try to address Arsenal’s problems in terms of height and be more “active” in the window? I guess we’ll have to wait and see…

I don’t know if anyone’s heard of my blog but apparently people seem to have a few good things to say about it. I’m a staunch defender of Arsene Wenger and I’ve done a two part piece on Arsenal. One today and another will be out on Friday: