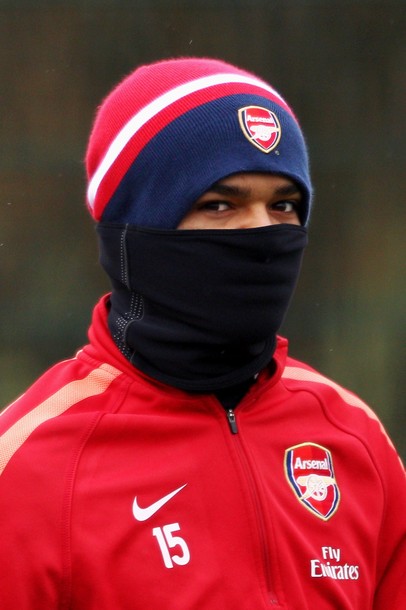 Denilson looks set to join former side Sao Paulo on a season long loan deal, according to ESPN Brazil.

The midfielder, who has travelled with Arsene Wenger’s first team squad on their tour of the Far East, will undertake a medical in his homeland on Monday as he eyes a swift move away from the Emirates.

Having spent the majority of last season on the bench, the 23-year-old made clear in May that after a meeting with Arsene Wenger he was free to leave the Emirates.

“I’ve simply been to see (manager) Arsene Wenger and told him how I felt – and he has agreed to let me go,” he said. “This has been the worst season of my life and I am so upset, so frustrated. I am a winner and I came here to win trophies but I’ve been here for five years and won nothing.

“A footballer’s career is over very quickly so it is time to move on. I know some people think I’m crazy. I need a fresh challenge and although I know I’m taking a big gamble I am ready to take that risk.

“I can’t see myself returning in a Chelsea shirt, or Liverpool or Manchester City – and definitely not Tottenham. I think my future will be in Spain or Italy.”

It has yet to be established whether Sao Paulo have an option to sign Denilson on a permanent deal although having cost the Gunners nearly £3.5 million in 2006 it seems likely that the Arsenal board will look to recoup a reasonable sum from the sale of a player who signed a new long-term deal in 2009.

Good luck in your new endeavor Denny. I’d rather have seen Diaby go if I had to choose.

At least Diaby passes the ball forward. Den Neilson is a third rate Ray Wilkins – and he was shit too.

Gonnerific, diaby is a different level to denilson. Glad diary is staying think he has a good future at arsenal if he stayed injury free

Don’t forget denilson played a whole season as a starter for arsenal few years back ..diaby never got that and still I see him as a better player..says something about denilson, no?

Denilson have fantastic stats for passing, alot of the premiership is posession and taking your goalscoring opportunities, diaby runs and tries to take on too many people and loses the ball putting our defense under stress, Denilson kept the ball and passed it to a teammate, diaby kept running into dead ends breaking up our play.

There both pony end of story , denilson is a crab who only goes sideways , im sure i could have good stats if all i did was pass sideways 5 yds , and diaby well i think we have already wasted to much time on this fella , it was a shame he got he’s injurys but such is life and he will never get to the level we need

Plus at least Denilson was available as a warm body against lower teams, Diaby is throwing wages down the sewer as he never played, I’d loved to see the stats of how many game we won when Diaby started vs Denilson.

Denilson is a defensive midfielder competing with Song. He’s clearly not as good so he has to go.

Just what is Diaby? He was played on the left, in the middle, as a second striker at times. So Wenger must have seen something in his offensive side. But sadly he isn’t anywhere near top class. He runs into blind alleys, often hesitates and never really gives the final ball.

With Wilshere and Ramsey looking promising, I just can’t wait to see his back.

Never did anything wrong, just wasn’t good enough for the mighty arse.

Finally! This is really just like a new signing!
Good Luck to him though.

that Wenger can’t take us anywhere, I said that he can’t take us any fuhertr.To all of those who are criticising me, I would like to ask you one simple question: If Wenger is so brilliant then how come Harry Rednapp not exactly the greatest manager in the world on a much smaller wage budget, can take Spurs to within just one point of us this season?If Arsene Wenger could be honest he would say something like this: I’ve screwed up. I thought that the likes of Almunia, Bendtner and Denilson would turn out to be great players, so I… Read more »

Ops. I am brazilian and a São Paulo supporter too.

Basically Denilson isn’t good enough for the Arsenal squad, he’s lazy in tracking back/tackling. Gives STUPID penalties away!!
Nothing against the person so good luck.
Diaby I think is good enough for a place in the squad, he just isn’t consistent enough with his good performances, maybe just maybe this could be his season!

taking your goalscoring opportunities?when’s he done that?

Denilson: ““I can’t see myself returning in a Chelsea shirt, or Liverpool or Manchester City”

Chelsea, Liverpool, Manchester City: “Yup. Neither can we.”

Seeing some gooners here still fancy Diaby to shine for the Arsenal is just too sickening.

Diaby doesn’t give the final ball and will never give one. Neither is he a solid enough defensive block at the very top level.

But he will find his level at the Villas and Boltons. I’d like to see Wenger bundle him in the deal to bring Cahill to the Club.

The problem with Diaby is – he’s a pretty good player, strong, passes well, can dribble and score goals too. He’s quick and has a lot of stamina. But he wears a Sp*rs shirt when he’s sitting around watching TV and all to often looks like he doesn’t give a shit.

Summed it up perfectly. Doaby can be brilliant at times but I think it’s partly his attitude which I think had only been worded by the injuries. For me I see no difference between him and Eduardo, both fantastic pre leg break but never really came back from it.

Fuck denilson v diaby!!! Get rid of them both! I’ve never shouted so much at a player more than denilson! He gives the ball away ALL the time! Completely needlessly! Good bye and good riddance

Good riddance. Denilson was lazy and shite
I will never forget the sight of the refereed beating Denilson up to our penalty box in the game against manure when Rooney scored

Er, you’ve won nothing because…………your not good enough. Quite simply the worst brazilian since posh spices’.

Denilson showed great promise when he first cracked into the squad. Sadly, the promise never turned into anything much. He’s had his chance and is just taking upba valuable squad position now. Diaby has been terribly unlucky with injuries, but I truly think he’s taking up a valuable squad position as well. I would like yo see Frimpong and Lansbury take the place of Denilson & Diaby.

I can’t see myself returning in a Chelsea shirt, or Liverpool or Manchester City – and definitely not Tottenham. I think my future will be in Spain or Italy.”

Give him some credit for the above quote, just did not fit with us really, wish him luck, and we can give the wages to someone able to compete in our side

Gunners FTW over the Cantonese!

He, heeh. I hope Denilson turns his loan move to Sao Paulo into a permanent switch. Could Arsene “the profits” Wenger extract some 3 million bucks from the Brazilian outfit for the midfielf misfit?

The only reason Denilson is classed as a ‘Brazilian’ is by the fact that he is a cunt with neatly trimmed hair.

Good riddance to this lazy, stupid shower of shit, I’ll drive him to the airport and accept a transfer fee of 20 B&H for him.

Diaby gets one more season for me, there’s a really good player in there trying to get out.

I’m in agreement with you. I understand people’s annoyance with Diaby, and there’s no doubt he’s had his sloppy games for Arsenal, but when he is playing well he’s different gravy to Denilson. The latter is mediocore at best, though he did score a cracker at Everton. Diaby though has scored a few thurderbolts and has had a few influential performances – Liverpool in the Champions Leaugue for example. I do understand those that speak about him being injured and picking up huige wages, but if he can remain fit then he could prove a decent squad player. Plus he’s… Read more »

I can see it now
Next season we lose fabregas and nasri,”on a free”
Denilson comesback andwenger states he is like a new signing, no need to replace the two

Overtaken by a fat middle aged ref as he reluctantly chases an opposition attack. That’s Denilson.
Wears a Spurs shirt and scored the winning goal for United against our Red and White Arse. That’s Diaby.

goodluck deny!! sorry you could not input regularly enough in a positive manner which would add some input to success, but blame the team if you like. Six years is a long time without trophies, but hold your comments back matey when you’re not a star eh?.. the discussion about diaby seems to be a little irrelevant, he aint goin no where, so perhaps we need to show a little support hey people?? I dont here the same canning for RVP?? plays half a season and just only missed out on golden boot??? What if he’d played an entire season???///… Read more »

This is ‘support’? Each trying to outdo one another in their venom for Arsenal players?

Dave, fans have a right to be venomous when it come to players like Denilson.
He earns top money and strolls around the pitch without putting any effort back into the team and fans that have done everything possible to help him achieve success with our great club.
He was more than content to collect top wages and just shrug his shoulders and coast along.

Good riddance to him hopefully something clicks at Sao Paulo and they take him off our hands. (we’ll throw in a free Eboue and Vela too)

I got a U-Haul van here I will come and get the useless buggers myself if AW will finaly off load them. I am sure I could fit
Dennilson
Diaby
Eboue
Almunia
Rosiscky
And about 10 of them over paid teenagers in the back.