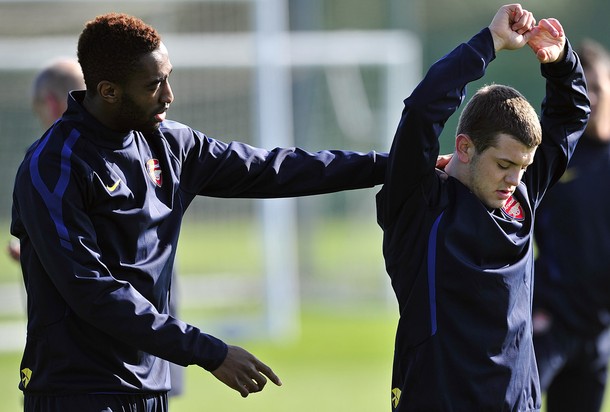 Johan Djourou has made clear that the Arsenal squad are not distracted by the constant newspaper headlines linking Cesc Fabregas with a move to Barcelona.

Arsene Wenger has already rejected a £27 million bid for the Spanish playmaker, but with the European champions ready to take the transfer to the wire the speculation looks set to overshadow the club’s pre-season preparations and tour of the Far East.

The Swiss defender, who returned to London Colney this week with the rest of his teammates, told BBC World:

“We know that there will be stories but we know what we’re aiming for and what our goal is.

“We want to be successful so we don’t really get distracted by this. If he [Fabregas] goes, he goes.”

Asked if he felt other players would be able to fill the void should either Fabregas or Nasri depart this summer, Djourou optimistically remarked that departures often forced other squad members to step up their performances.

“It could be true because when you look at players who normally come out and express themselves, it’s when someone goes,” he said.

“When Thierry [Henry] went, Cesc expressed himself even more, but the two together [Fabregas and Nasri] are great so you’d rather keep them. If someone goes then I’m sure someone will step up.”

don’t think they will be remembered in the long run as they have both won nothing with the club.

Blogs is right, my soul is slowly wilting away

To Welly..
Ur a cock…how can u say cesc won’t be remembered at arsenal? We may not have won anything whilst he’s been here but he’s still been a fantastic player for us and will definitely not be forgotten…not all great players actually win trophies

Hang in there Kitty 🙂 We’ve still got weeks of unadulterated transfers to get done. The newspapers are making a meal of the whole Nasri and Fabregas situation as blogs pointed out this morning. It’s unfortunate how much negative spotlight Arsenal has received and next year it will get worse methinks. We’ve become a media scapegoat for shite journalists and utter repetition of drivel.

I echo your sentiments completely but we can only be optimistic until the end of August, then the hammer of cynicism shall be produced.

They need the eye of the cunt so they do.

Djourou has an interview on the BBC

He seems to think that Arsenals defence wasn’t so leaky.

blogs my soul is on the floor, consumed and vomitted up because of trashy journalism and utter frustration… thanks to your site i have never been so well informed pre/off season and i thank you and resent you for it! My office is full of manc utd scumbags who are all to quick to point out that they have made signings and that Kevin Doyle sounds like a sensational bit a business!! In truth our signings will come late as i think the french still like to punish the english!! I called the Alvarez business two weeks ago, i just… Read more »

No, it’s not his decision, it’s Barca’s decision. CUoCO etc.

Actually, its Arsenal’s decision, since we hold the contract, and there is no pressure to negotiate. In my opinion, we should simply refuse to speak to Barca regarding anything. If they call, hit the ‘ignore’ button on the mobile. Every time. If they show up, don’t answer the door. And this should continue even after this Cesc thing plays out, since they’re such horrible little cunts. Regarding the actual topic of the article, I would say that Johann is stating the obvious, because if Nasri and/or Cesc leave this summer, someone will HAVE to step up to fill the void… Read more »

Haha i think Badaab got it excactly right. Except that in my opinion Arsenal should simply send a fax to cuntalunia consisting of two words : “Fuck off.”. Keep it short and simple so that even those idiots get it. But than again I’m not sure if burning all the bridges with barca is so clever, they’re so pathetic at negotiating transfer fees that most of the time you’ll make a fortune by dealing with them (As Arsenal did with Hleb or every other player thay sold, or just remember Ibrahimovich vs Eto’o and 50 Million or somthing). In this… Read more »

Like his positive outlook but the club/board owes the fans something regardless.

Half Jew Half Kangaroo.

Players like the future star Rambo may be able to make the jump, Jack also of course however, I can’t see too many others who can fill the gigantic boots of Cesc. That will surely require a signing, and pronto.

….unless…..nah, it’s not even funny to joke about Denilson and Diaby somehow, after all these years, transforming overnight into some midfield maestro extraordinaires! That’s possibly the dumbest thought I’ve ever had :-0

It must be Transfer Window Madness finally getting to me!

The Cesc saga has made me lose the will to live, I’m so bored of it, perhaps that’s Barca’s tactic, eventually we’ll just accept anything to make them go away. They are an annoying gnat buzzing around all the time but we can’t squash it.

If Cesc goes, I will thank him for his contribution, I don’t think I’ve ever seen a 17 yr old so comfortable in the first team immediately. Let’s hope we get one more year from him.

I cringed when Djourou said “its his choice,” referring to Cesc’s “decision” to leave for Barcelona. No it isn’t his choice. Its the club’s choice.

Cesc made a choice a few years ago. Cesc chose to sign a long-term contract with Arsenal. His choices are done after that point. He has to honor his contract.

If he’d rather be in Spain, too bad. He should have signed a shorter contract. Now its up to the club to determine his value and sell him if any club offers an acceptable amount. So far, no club has.