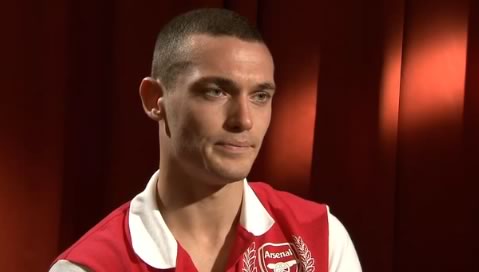 Arsene Wenger’s decision to sell Gael Clichy and replace him with Kieran Gibbs has raised eyebrows amongst some Arsenal fans, but Thomas Vermaelen is confident the 21 year old can make the step up.

Speaking to Arsenal Player, Vermaelen was quick to extol the virtues of the man who, fitness permitting, is likely to be playing outside him on the first day of the season.

“I think Kieran is a really talented player”, he said. “I played a few games with him in my first year and he impressed me a lot. He’s a fit player, he can run a lot, he’s a technical player as well. He has all the qualities to be a world class full back”.

And the Belgian is keen for the fresh start the new season brings, saying “Everybody starts from zero and everybody has to start again. The past is behind us and it’s good to look into the future.

“That’s what we do now – we start all over again with a new chance and we will go for it this year”.

Meanwhile, Arsene Wenger’s attempts at reinforcing the centre of his defence have taken a setback with Everton widely reported to have a rejected a £10m bid for Phil Jagielka. It remains to be seen if Wenger will test Everton’s financial mettle with an improved offer or turn his attentions elsewhere.

I think Thomas being back is great for us and I hope to God we get someone who can boss that left hand side. I like Gibbs honest I do (not in the biblical sense) but I think he needs a little more time.

What is the Biblical sense of liking someone?

Gibbs first choice? Fine but who covers him when he’s injured? Not traore possable TV but only if it’s for one or two games please. And I agree with His Lordship about Mata as long as Nasri goes abroad, but I think he wants to stay.

Tommo I am with you on that we have some really strong players and we only need a 1 or 2 that can help these young guys. I really dont get why AW wont spend I dont understand. I love telling everyone who beat Barc in the CL last year only 1 team and got dam close to drawing with them. No player is bigger than the club so bring in some experience and sell Nasri for being a dick and if Cesc wants to go then let him go to real Madrid for 25m and karim benzema to really… Read more »

To be honest Lord Teddy beating Barcelona is not a great achievement as a Chelsea bastard said to to me today because in October Barca were beaten by Hercules CF who were just promoted to La Liga. He even told me that Cristiano Ronaldo was his favorite Chelsea player.

You could understand now why he is classified as a bastard and gloryhunter.

If we have the resources; according to Gazidis then, why are we doing what Barcelona are doing to us by offering less than we did last summer for Jagielka.

Come on lets spend now to sure up our defence properly.

That’s because he’s 1 year more to his end of career unlike Fab who is coming 1 year closer to his prime….

sorry not *more but *close

Yeah and pls, we are not waging a public war through the media to destabilize their player. have not heard a single thing about this from any source associated with the club.
Take it easy, read the news, but until the transfer window closes, keep it positive in here…you can’t do anything about it..

am I the only one who thinks Traore is better than Gibbs?

nope i agree with you, gibbs is only thought to be better due to being english, typical overrated englishmen, what has he actually done for us?

Gibbs is thought to be better because he looks like a better prospect. Lets face it though, neither of them have had much first team experience. There’s no way Traore is a defender, based on what we saw of him when he has played – albeit a fer years ago now. Though to answer your question, not alot… but neither has Traore. Therefore, if we have two players on par with each other, isn’t it better to have an Bulldog in the team?

No your not, I think Traore is a better defender, bit lazy getting back sometimes though

I remember thinking Traore played great for Pompey and was looking for him to replace cliché back then so I think he will do okay, even though juventus suck balls

@PIKEN79 I would very much hope so!

That is exactly what Arsene Wenger sees in Gibbs. Traore was about to be sold to Benfica last season but opted out because he realised he needed to cut his wages. Both of them are weak defensively but Gibbs is better.

Arsenal needs to have local players who love the club rather these bench foreign mercenaries who come in, do well and unsettles the club every summer.

Gibbs is a decent player, he needs to be reined in defensively thats for sure, but I can’t help feeling thats more down to the style of play of the team than any individual faults. He will do a decent job given the chance, I have high hopes for him. @ Pritpal .. so whats good for the goose is good for the gander , what has Traore ever done for us, apart from near coronaries every time hes on the ball. Gibbs isn’t overrated at all, he is twenty one and still learning the trade, you tell me how… Read more »

Vermaelen is only talking him up, because he knows if Gibbs fucks it up, it will be ‘Tommy V for left back’.

Where have you been the last 4 years ?

Great post,I too believes in Gibbs talent but the only problem is that,he’s an injury prone player.Hope he will stay un-injured for the whole season so as to see what he’ll bring in his possition!

Traore has pace and some power, but little else. Can’t defend for toffee!

The loan review on Young Guns seemed to say Traore had improved defensively:

“His defensive play, positioning and tactical intelligence are much improved and it is no small compliment to say he fits in well among Serie A defenders. The game against Milan, a 1-0 defeat, was probably his best performance, showcasing his closing down, recovery pace and newfound defensive attributes.”

He seems more dynamic than Gibbs to me, attacks the ball with more aggression and seems to have a better cross on him… but that’s from very limited viewing.

cant be serious. gibbs has been caught out on defense many times. when opponents come towards him with the ball he stands there and looks at him and does nothing, hes only decent at going forward. i dont know how wenger picks his left backs. ashley cole was the last decent left back ive seen in a arsenal shirt. i dont see any defensive potential in gibbs or traore. attacking potential yes.