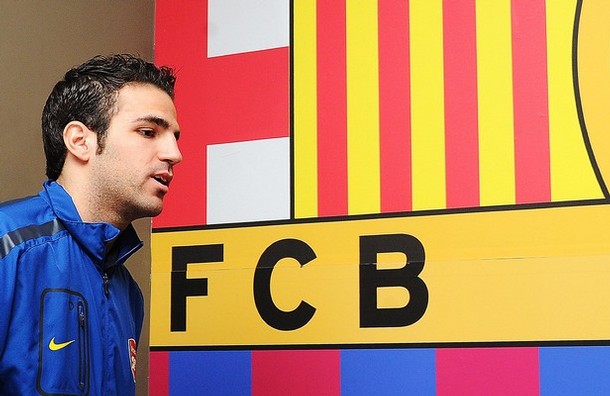 Barcelona coach Pep Guardiola has confirmed that Arsenal are prepared to sell Cesc Fabregas this summer and reinforced his claim by stating that the two parties have entered negotiations.

Last summer the Catalan side had two bids dismissed out of hand and while a third bid of £26 million was again rebuffed this summer it appears that Fabregas, who is under contract at the Emirates until 2015, could still seal a move to the Nou Camp before the end of the transfer window.

As things stand however, Arsenal remain steadfast in holding out for a transfer fee in excess of £40 million; a  figure which looks likely to prove troublesome for Barcelona given the fact they have prioritised the acquisition of an attacker, thought to be Udinese’s Alexis Sanchez, this summer.

Speaking to the Spanish press, Guardiola revealed: “Last year we were interested in Cesc but Arsenal did not make him available.

“This year Arsenal have agreed to negotiate and we’re working on it. Prices in the market are what they are right now, but I hope that everything can be resolved.

“Everything we have done has been with permission of Arsenal and Mr Wenger knows that. Cesc owes them.

“Between a midfielder and a forward, our priority is a forward, but there’s money for two players.”

“There is money available to sign the player and until the last day [of the transfer window] we will try to sign him, but I’m the first to understand that sometimes these things cannot happen.

“Cesc will make us better, we’re interested, but if it’s not to be then maybe next year and we use the money for something else.”

The comments stemming from Barcelona appear to contrast those made by Peter Hill-Wood last night who stated that he has not heard anything from the reigning European champions since the bid they lodged last month was dismissed.

Great idea but for the fact that he wants to go and they’d probably then turn around and say he’s only worth £10 instead of the £20 they were willing to pay!! Bunch of cheapskates! What astonishes me is the fact that he’s still so desperate to go there after seeing how little respect or value they place on him. They say love is blind i guess…

Show us the money then we’ll talk.. until then, all this are pure rubbish. It’s a nice PR work to say that they may not be able to afford Fabregas..

To me this feels a little like Pep preparing the Barca fans for disappointment with regards Cesc…yeah we tried for both players, got Sanchez but couldn’t do a deal for Cesc (even though secretly we might not have tried that hard)…

How any club could prioritise Sanchez over Cesc is the biggest tell tale sign that this may the case,.. they like the idea of wanting you Cesc, but not enough to actually want to want you…

Sanchez over Cesc, give me a break…

“Everything we have done has been with permission of Arsenal and Mr Wenger knows that. Cesc owes them.”

How could he say that with a straight face?!!!

I’m sure AW and the club said ‘yes it’s fine for Window licker Pique, Xavi, Puyol, Xavi, Alves, Villa, Xavi, Messi, Rossel, Xavi, Catalan mayor, Kit man and Xavi to bleat on and on and on to the press, talking down our club al summer.

face it, Peps a tosser too.
If your a catalan your a tosser, been there and not met one decent one.

This says it all
http://www.7amkickoff.com/2011/how-does-cesc-change-a-lightbulb/?utm_source=feedburner&utm_medium=feed&utm_campaign=Feed%3A+7amkickoff+%287amkickoff%29

“I’m the first to understand that sometimes these things cannot happen.”

THEN SHUT THE FUCK UP.

As some have already said it is total PR spin to sedate the Barcelona Fans.

Lets put in a £26 million bid for Messi and then announce he’s not a top priority.

Why do they think that we’ll wait until August 31st?! Surely, if he’s still here by the time the Champions League qualifiers start, he’s staying.

Pep and all Barca-affiliated beings can go to hell. CUoCO!

Let me get this clear in my mind: Barcelona wants Arsenal to subsidise their purchase of a forward by knocking approximately 35 million off the true value of our captain, so they can then go and spend that money on their “forward”? This is their “negotiation”?

Time Barca made up their mind, do they want Cesc or don’t they. If they do, let them make a proper offer, one that doesn’t insult both Cesc Fabregas and Arsenal Football Club.

Pep fuck off and buy some cardigans you and your management team are bunch of obnoxious pricks. Tell you what why dont you bid 25mil for Nasri he’s a cunt and will fit it with you lot really well.

elsewhere before on this site,.we solhud petition wenger to table a bid of a333.7m for messi, after all they think they can get cesc for a reported bid of a335m so let’s turn the table on them. wenger solhud also get nasri, cesc, vermaelen & co to come out with various statements about how messi cries himself to sleep at night cos he so unhappy & wants to join us. watch how barca & FIFA & blatter would react then. Fuck barca. I hope real madrid fucking destroy them this year. 0 0

They should go cap-in-hand to the Qatar Times New Roman Foundation and just ask for the cash if they haven’t got it already.

Paraphrased: “We want him, but not so badly that we’ll pay what he’s worth so we’ll just buy someone else instead.”

More disrespectful comments coming out of Barca. When they bid next we should wait until the last second of the transfer window and just turn around and say. FUCK OFF.

The only reason I would ever want Cesc to join them is just to stop all this bullshite.

Now officially the most boring transfer saga in the history of football. Anywhere. Ever.

I never thought I’d see ‘Kerry Dixon to Arsenal’ knocked off the top spot but there you go.

I’ve seen a few people say why is fabregas so desperate to join them??? I don’t think he is!! Yh he would play for them if he could, I’d leave my job and massage oil into the tots of page 3 models a) if the job was available and b) they wanted me, so wanting something is far from being desperate for it and I’m quite happy spray tanning brazilian models for there next photo shoot!!

How must Cesc feel after hearing everyone at Barcelona constantly talk about him joining them, then the club goes and spends the majority of their transfer budget on someone else?

Obviously don’t want him that bad, he just seems to be a bit of a trophy for them.

For all Barcelona’s undoubted greatness, they do lack class.

Note to all those who are affiliated with “bastard-lona” the “cunt-lunians” CUoCO!! I am sick to my balls of this fucking shite every single day from these arrogant fucks, change the fucking record please!! As I’ve said elsewhere before on this site,.we should petition wenger to table a bid of £33.7m for messi, after all they think they can get cesc for a reported bid of £35m so let’s turn the table on them. wenger should also get nasri, cesc, vermaelen & co to come out with various statements about how messi cries himself to sleep at night cos he… Read more »

Lord Teddy Ears
Reply to  Will

Sell Cesc to Madrid for 40 million simple as that

Fed up of Barca
Reply to  Will

[…] I get the sense Barcelona are becoming increasing desperate, if the email I just received tells us anything at all. Yesterday Pep spoke, and as much as admitted that while they want Cesc the priority this summer is to sign a striker. […]

Well you can’t say the Catalans don’t have a sense of humour. I nearly choked on my Pop Tart when I read this…. Barcelona’s sporting director, Andoni Zubizarreta, claimed that the club will not try to force through the deal. He said: “The position towards Arsenal is one of maximum respect because the club own the player; also towards the player. From there, our position is to try and see eye to eye [on a deal], creating proposals that may be of interest, while always maintaining the maximum respect. We don’t have a style of doing things by force.” Wot.… Read more »

Get a grip Arsene, sell Nasri to anybody willing to pay £20M and tell Barcelona to fuck off and come back in 2 years time.

Barca have taken the piss far too long now. I would call barca and say you’ve taken the piss out of arsenal and cesc. We will now reject any bid from you wankers and if cesc wants to return to Spain we will sell him to Real Madrid!! Sorry cesc but this is all Barca fault. You either stay wiith us for 4 more years and we let you go on a free or we sell you to Real Madrid. What do you want to do??

How funny would it be if we sold him to Real Madrid? He admitted a while back his family would understand if he were to play for them. I hope Mourinho carries on with the “mischief making” and submits a massive bid!