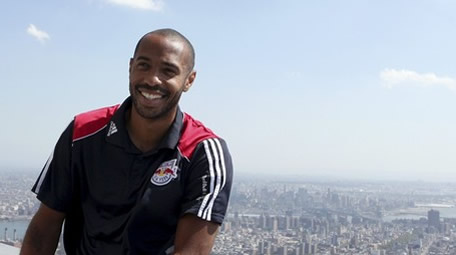 Thierry Henry, a man who knows a thing or two about scoring goals in red and white, has backed new boy Gervinho to add some sparkle to Arsenal this season.

In a press conference ahead of this weekend’s Emirates Cup Arsenal’s all-time record goalscorer said, “He is a good player. I have known about him for a very long time.

“He is skilful, versatile and you will see that in one-on-one situations. He is going to kill a lot of defenders in this league. Gervinho is fast, has great vision and everything to succeed at Arsenal.

He is an Arsenal player and Arsene doesn’t buy players who won’t fit in his team. The fans will be excited by him. He can light up a stadium. He can play anywhere.”

Personally I find myself encouraged by Henry’s belief that the Ivorian can kill defenders, and naturally I hope he starts with John Terry. I will, however, accept the deaths of Rio Ferdinand, Ryan Shawcross or William Gallas until he works his way to the big one.

Henry also spoke of his enjoyment of life in the MLS and said he’d like to return to the Arsenal one day once his playing days are over.

“I would like to. It’s a big thing. I would love to be part of the club one day, but it’s not up to me. Right now, I think they are in the right hands and we know that”.

Rarely have we seen Thierry Henry sing a player’s praises. Gervinho will be special.

John B.
Reply to  Nathan

arshavin: 14
gervinho 15
vela: 4
Vermaelen: 18
Van Persie 67
Nasri: 3 goals due to much time spend on the bench in manchester

I like your forecast! Especially the one on Nasri.

Enjoy the match Sunday and don’t be too hard on our Red Bulls. If Backe plays him (he somewhat incomprehensibly refuses to start him), keep an eye on our youngster Juan Agudelo (#17). He can be explosive, that one.

Merci Thierry, Merci. I would love to see him back at the Emirates in any capacity. A true gent and a true Arsenal legend.

@RJT good luck Sunday, I hope we win of course but it’s a game im looking forward to. Take care of our legend and oh you probably don’t want your young gun to play well. We have a habit of buying kids with great potential 🙂

NorthernGoon – Thanks, so far this season it’s TH14 taking care of us more than vice versa. We’re – ahem – underperforming in the league. Agudelo had some stunning highlights early in the season, for the Red Bulls and the US Team, but has gotten lost somewhere along the way. Don’t take him away, just maybe rub some Arsenal quality on him this weekend, deal?

Will be great to watch Henry at Emirates and, to end the threadjack, this post makes me very excited to watch Gervinho this season.

What, no mention of Wayne Rooney’s brother?

This Chicago Fire supporter was disappointed that NYRB sent it’s reserve team for a US Open Cup game last week. I guess there’s a reason we have 5 trophies and NYRB 0. 😉

At least we can agree on the Gunners. Looking forward to Henry’s return tomorrow, if for purely sentimental reasons.

Also, Agudelo hopefully represents a future star for the USMNT.

I loved the part about killing defenders and working his way to the big one.

me too! he entirely forgot evra by accident though 🙂

Doesn’t this sound like the makings of a video game ala Ninja Gaiden or Contra where you play as Gervinho? You make your way through various levels of anonymous defenders until you get to the level bosses; ie Shawcross, Ferdinand etc. Beat all of them, and the last level is a one on one with Terry. Someone make this game!

Manfredi, I presume Velas goals will all be sublime chips?

how did TH get that high up?
would love to see him back though, legend.

John Terry. Rio Ferdinand, Ryan Shawcross or William Gallas………. hmmm
And how about Patrice Evra or will that cross the line between killing and massacre?