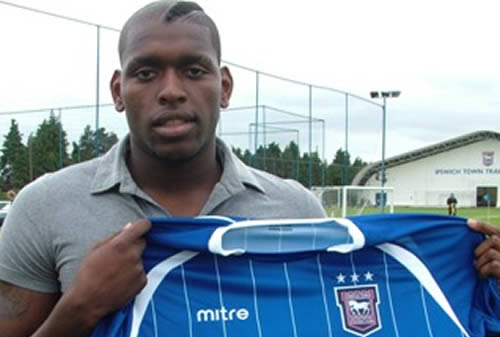 Ipswich Town have announced the signing of Jay Emmanuel-Thomas from Arsenal.

Despite being very highly rated in his youth team years he made just one start and four substitute appearances for the first team. Arsene Wenger, famous for giving youth every chance, clearly decided something was lacking in Thomas and sanctioned the move this summer.

The player himself is looking forward, however. He told the Ipswich Town official website, “Obviously it came to the stage in my career at Arsenal where I needed to be playing games. I had a decision to make and Ipswich seemed the right place for me. I had a good time at Arsenal and I’m going to miss all the boys but my future is about me and I needed to move on.

And on his Twitter account he said “Thank you to Arsenal FC for everything they have done for me an making me the player i am today, I wish Every1 there all the best Peace&Love”.

There’s no doubting his technical ability as a player but Town fans will be hoping he can sort out the attitude problems that did most to hamper his progress with the Gunners.

Is that JET or Mario Balotelli?

The lad is moving on to get games, it didnt work out for him at Arsenal. It happens all the time.

There doesnt have to be an inquest or some ill feeling every time a player moves on.

Pathetic attitude you got there yourself

Oh well, let’s replace him with Messi. Or Jérémie Aliadière.

Glen Helder could do a wee turn.

The lad says goodbye and thankyou and gets called a tit ?
WTF?

Nice to see you cut off the top of his head in the photo so his extremely daft hairstyle is not visible.

Seriously, JET, shave off that excuse for a hairstyle. It looks like a badger crept into your room last night and did it’s business on the top of your head.

I think the negative sentiment comes because he has obvious talent but never worked out how to apply it properly.
He has ability but was too arrogant to put in the hard work to sculpt it.
Maybe Ipswich will change that.
Best of luck to him.

Maybe our manager is unable develop talent. The small number of players he “developed” since coming to the Gunners is coming from nations across the world. From the young guns? Not one of all the talent has managed to step up to EPL quality at arsenal.

Well, at least he thanked the club and he said he needs to move because he needs to play. So please don’t call him a TIT.

I agree, a lot of players who leave end up sticking the knife in. At least JET is thankful for what the club have done for him…

Another prick with an over inflated ego enjoy the turnips fella !!!

The difference with JET is he comes from an Arsenal supporting family. He’s not as arrogant as you perceive him to be. If you see him around his family you’d understand how the kid is. He’s just not a get your head down run all day long typ of player. Much like Berbatov the difference is he’s young so we wanted to see more application.

I’m really surprised at the reaction here. He’s not exactly gone and insulted the club or left with ill feeling. Many young players leave bigger english teams because they don’t make the grade or due to their attitude or mentality. JET is in that grade. I believe he does potential to be a decent player but is more likely to vanish into obscurity and insignificance.

The sentiment comes from the fact that Arsenal put a lot of time, money and effort into developing an undoubtedly good talent, but when it came to the crunch, it was his failure to really apply himself that let him down. He had the attitude that because he bossed it in the reserves, it was only a matter of time before he was in the first team. Sadly, being able to maraud through defences at reserves level, largely thanks to a size advantage, does not translate into doing that in the Premiership. What is required is a willingness to work… Read more »

I agree with your points entirely. His own personal character and mentality has been his down fall. Although his attitude leaves a lot to be desired he has not shown any malice as far as I know. Nor does he appear to be as stubborn or arrogant as someone like Balloteli (who should be called a tit or anything of the like). Just seems wrong for others to insult him when he hasn’t done enough to merit it, is all I’m sayin

Sorry my last point was meant to be reply to argonaut

Arsenal haze all in ma brain
lately things at the club don’t seem the same
Arsene wenger is acting funny but i don’t know why
it seems he again sold us the same lie
Don’t you think its about time him and arsenal said their goodbyes!

How dare you sully Jimi with a rant at Arsene, doughnut.

I really thought/hoped he’d make it with us. Had a look at his twitter for a couple of weeks, it was like a foreign language. Realised he probably didn’t have what is needed between the ears when about an hour after the carling cup final he posted a tweet asking people to vote for his mate in the final of You Can Dance. I guess he’s just the typical example of a talented boy having too much too soon.

Obviously his attitude let him down.

He’s go Arsenal DNA , we’ll be back for him Ipswich

[…] a-pace yesterday as we provided another signing for another club. As expected Jay Emmanuel-Thomas joined Ipswich for around £1m. It’s an unsurprising move considering his career trajectory and his age. If he’d […]

is it just me or does he look stoned off his tits in that picture?

So true – I was thinking exactly the same thing..!

[…] a-pace yesterday as we provided another signing for another club. As expected Jay Emmanuel-Thomas joined Ipswich for around £1m. It’s an unsurprising move considering his career trajectory and his age. If he’d stayed at […]

NYSC Camp life over, Arsenal news to make up and blogging back with a bang. « Gooner Daily

[…] sticking with player departures, Arsenal’s hefty versatile youngling Jay Emmanuel-Thomas has joined Ipswich Town for a fee of about £1m. This just goes to say that it’s not every youngling that would make […]