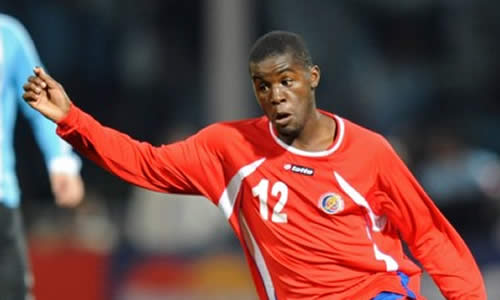 Arsenal look set to make their third signing of the summer having agreed a fee with Costa Rican side Deportivo Saprissa for young striker Joel Cambpell.

Gunnerblog reports that Campbell should sign a 5 year deal and could wear the number 12 jersey. Saprissa’s President, Juan Carlos Rojas, called it ‘an historic agreement’ and suggested everything could be wrapped up inside 24 hours.

Clearly he’s never been involved in an Arsenal transfer and should probably use the word ‘weeks’ instead but fingers crossed there are no delays.

The player’s involvement next season is dependent on him receiving a ‘special talent’ work permit.

Fantastic signing ! Great piece of business that, fingers crossed for the work permit…

Let’s wait until we see it on the Arsenal website, eh?

Until then it’s simply gossip.

Hope he can get work permit and join the team this season.

Any info on him? Is he any good, ready to play first team or?

I’ve been watching him in the Copa América and I like him. None of the lazy appearance of Marouane and none of Nicklas’ misplaced arrogance.
He looks like a guy enjoying footy with mates. Strong physique and quick movement.
I believe AW can shape Campbell into what perhaps J.Defoe or C.Cole have failed to become. Highlight reel of K. Prince Boateng springs to mind.

Chamakh may be a lot of things, but lazy is not one of them

so apparently campbell can be compared to defoe, c cole and boateng who are all very different players who play in different positions and with different styles. is he really versatile or are you just naming random black players and saying he’s like them?

Harry, don’t be daft.
If that’s really your attitude, why bother reading this or any other blog. Surely, in this particular case, it’s a little bit more substantial than “simply gossip”.
Player’s dad and club’s president are confirming their intent on national radio – that’s rather well sourced compared to, say, a wet dream by Xavi or random motormouthing by Gasperini.
That doesn’t make the deal carved in stone yet, but let’s hope this is not one where Mancini or Sir Ferg come splurging.

until he’s signed, he’s not signed.

and further to that, it seems in this instance, that even once he’s signed, he’s still not necessarily a player for us next year- just like we’ve never seen ryo, gallindo or wellington silva actually play for arsenal, despite being gooners.

sounds promising, but lets not break out the champagne just yet….

Another nobody from nowhere – never heard of him before. Have to say regarding transfers so far so shit. I honestly don’t know why he bothered at all if this is the best he can do. Tight fisted french twat….

like Javier Hernamdez was a household name a year ago right? he was the rave and man united made a multi million pound signing…..you are just a thicke human being

Leon off the Apprentice ??

Great to hear we haven’t finished in the transfer market…..

nice he looks like a promising talent, why have we still not copleted the the gervinho signing??

Just what we need, another young unproven attacking talent from a different league.

He could hit the giddy heights of Carlos Vela.

Can he play left back? Or center back?

No, but Eboue can…

second signing the big foreheaded geezer has not actually signed yet!!!!!

If this goes then should be a bench-mark for other trasnfers. No dilly-dallying, do your business with some aggresion n urgency. We heard it yesterday, agreed fee in no time , hopefully signs soon. Not two months like Gerv or 1year like Chamakh. May be Wenger finally learnt from d Alvarez saga. A big maybe…cos a leopard’s spots knows no bleaching. Show us you’ve learnt u old, arrogant french Shylock!!!

Because moaning at the executive staff isn’t fashionable now, is it? Everything bad at Arsenal is because of Wenger, everything good(?) is because of Dein.

I’m not sure how we can make any negatives out of a signing, I mean who had really heard of Nasri in england till he was signed? Or Henry, or Veria even wasn’t the superstar he was till he played for Arsenal. Let’s be positive if he does sign and hope he’s another gem. Good day to you all!

Its pretty unfortunate that whenever word of a new signing is brought up, the first thing people look at is the name and age. Yeah yeah, there’s all that experience issue. But watch the kid. I know Youtube video compilations are not necessarily accurate all the time, but when was the last time someone playing for Arsenal took a shot from outside the box, except for Nasri. And if I learned one thing from the game in China, its that even if our defence sucks, our offence ain’t that great as well. Van Persie is good, but sadly unreliable due… Read more »

All the top clubs in Europe have been trying to get this lad. So let’s be positive guys as this could be a gem like Hanandez was for man u. I don’t care if he’s an unknown, if he has what it takes to be a top player then yes please. Now let’s sign some defenders please Wenger.

my nob is bleeding still i cant find any posts online to explain it..can anyone help please? im really starting to panic which makes more blood come out

This is great business, a promising player with real star potential for under a mil. And very low risk when you think about it. Definitely one for the future though. He is lightning quick! And has a pinging left foot. The goal he scored from a free kick (can’t remember who against) from about 25 yards was fantastic! Could turn out to be a great signing, but only time will tell. Also, when AW said “one or two more signings” (after Gervinho), I really don’t think he meant signings like these (i.e under 20yo, cheap, high potential, low risk), so… Read more »

I am really hoping we sign Cahill. Think having a strong partner for Vermalen would be very tasty. Think Cahill is the right age for experience, he’s tough and spending £17 million sends out the right signals. I ‘m all for prudence in are transfers but we have the ability to spend. Why wait one year just to save money when success in the present should always be are top priority.

John B.
Reply to  Gnasher

Wenger will not buy another centre-back. Trust me. He has Squillaci (going nowhere), Djourou, Koscielny, and Vermaelen “like a new signing”. Besides which, Owen Coyle has confirmed there have been no bids for Cahill.

Besides which, buying Cahill would “kill” Djourou and Koscielny.

Besides which, when was the last time Wenger spent £17m on a player he could get for free next summer?

So, no. No Cahill. I’d love it, and we need it, but there will be no defensive reinforcements (I mean, uh, um, other than Carl Jenkinson…), and we can thank Wenger’s stubbornness for it.

Just watched this guy on youtube…dude’s left leg is wicked! Welldone Arsene!!! & for all those saying trash about him even though ‘ey’ve never seen him play, search ‘joel campbell’ on youtube, then come back on this thread & apologise 🙂

All very well watching YouTube highlight reels, those things can make anyone look like a world beater.
He is playing against 3rd rate opposition in a league in the arse end of nowheresville.
The premier league is the most competitive in the world, and the step up will be huge.

Sorry but I just can’t get excited about signing like this or Ryo at the moment.
Our squad is screaming out for hardened, experienced defensive signings, preferably with previous prem experience, not pissing about with these kids all the fucking time!

Minus the rage, you have a point. He’s playing against the cuban national team and such

For comparisons, he plays a little like Jozy Altidore (who you may remember from his loan spell at Hull a couple of years ago). Likes to play off the shoulder, and have some direct movement with and without the ball.
He’s better on the wing than Altidore from what I can see, but not as strong in the air as Jozy is. Looks to be better on the ball as well. One to watch for the future, but he’ll likely end up on loan someplace in Spain or the Championship this season.

So.. not like jozy at all really? Something tells me this comparison is based purely on the way he looks

Maybe ashley youngesque (in a good way of course)?

Nah, Altidore was played on the wing quite a lot during his early playing days in the US with the NY Redbulls, but Campbell has a lot of the direct running that Jozy displays while hes out wide. Campbell looks more finesse than raw power, which is more akin to the playing style at Arsenal.

give this guy a chance to prove himself..he’s just worth 1.5m euros,juuusst..unlike a certain Bebe dude man-u forked out 7mili pounds for.. we r all impatient for a centre back’s arrival,but lets give the french prof some time,am sure 2 defenders will be signed before the emirates cup!!

Why are people moaning about this player before they’ve even seen him! We need to face facts we don’t pay the best wages and were not considered the main title challengers anymore so to expect the marquee signings wanting to come to us is a bit unrealistic! I wish the lad the best of luck and hope he can help getting us back to winning ways!

gud news bt wil consider it as gossip til is officialy confirmed. Wenger pls i beg our defence is vry bad. Do sumtin

I have no idea what your trying to say, innit?

Apparently our offer for this player has just been bettered by another premier league outfit.

This text language, that’s how those people talk in real life isn’t it? If this signing works out he’ll be loaned out to some Spanish team and we will see him in a few years.

Yep I hear twitchy redknapp offered a better deal and he now doesnt know what he wants…… Tell him ask Nasri for advice.
Meeting tomorrow at 9pm uk time to decide apparently

My first instinctive thought was,”Yippee another kid who can play up front” and I’m still thinking along those lines.

IF he is brought straight into the squad and is a la Chicken tikka then brilliant but I’m no linger that optimistic. Taking the lad himself out of the equation I just can’t see AW changing the team tactics so this either means IF he gets a permit and the lads not shipped out on loan that Nasri is going or hes going to drop someone.

This kid reminds me of a young Shirley Crabtree. Good in the box, great on the dodgems – he has a keen eye for oxymorons. Let’s hope Eboue does not lead him astray to Hornsey Kebab House, Chamackck has not been the same since……

[…] although while the defensive area appears to need firming up, it is another young striker, Joel Campbell, who could become the club’s third signing of the […]

Hopefully we can train all of that nasty ‘shooting from outside the box’ stuff out of him, everyone knows the best course of action when running at goal 25 yards out with clear shooting opportunity, is to look for a sideways pass.

If he can speaks Korean than he’s OK better than Eboue total football the black dutch.