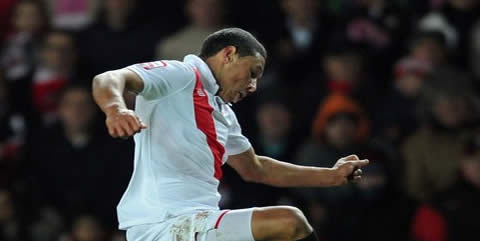 Quoted in The Sun he said, “I’ve had a chat with the manager, Nigel Adkins, about my situation and expressed my feelings to him. I talked about how I wanted to be playing in the Premier League as quickly as possible and he has been really understanding.

“I’ve heard Arsenal are in for me and to join a top-four club is what I hope for. When the bus comes along, you have to jump on it and make the most of your opportunities”.

And according to Ivan Gazidis, Arsenal are riding a bus filled to the brim with cash, ready to spend on new players to boost Arsene Wenger’s squad.

Whether than bus passes through Southampton on its way back from Costa Rica remains to be seen. The deal for Deportivo Saprissa youngster Joel Campbell is off after the player and his father didn’t bother to show up for a meeting with Arsenal executive Dick Law.

Arsenal have now withdrawn from negotiations and the 49A may well be heading towards the south coast of England.

49A? Gazidis doing his shopping in The Square now? Or has he sent Rowley off to the Astro Park to scout some talent?

He’s bombing up the Firhouse road as we speak.

What’s the name of that pub on the corner as you turn down towards Tallaght?

Its the OLD MILL blogs!

That’s not what it used to be called though? I think it was a lady’s name …

By all accounts this guy has the same speed, but better control then Walcott, it would be nice to see him in AFC colours. That said he will probably be the 6th or so player we have bought at his age in the last 6 months. Lets see more 1st team signings…

..isn’t it telling that the fringe players we are now trying to offload can’t find a permanent home? Bendtner, Denilson, Almunia….one loan signing and the other two? A lack of depth in quality is hopefully now being addressed.

I’m sure I saw him on the W7 on the way home from work last night.

This has become way too public now for an Arsenal signing. There’s no way City, United and Chelsea will stay quiet if we make a move for him. I don’t see this going through as these other clubs are going to offer more money making him very costly. Add to that the premium we are going to have to pay because he’s English, very highly rated and possibly guaranteed a spot in the English team in a couple of years if he makes the switch to a big team.

His quotes say he hopes for a top four club, not for Arsenal specifically, so your headline doesn’t match your content. That’s what I expect from The Sun – please don’t play at their level.

He does mention Arsenal though.

“I’ve heard Arsenal are in for me and to join a top-four club is what I hope for.”

That’s why there’s an article.
If he had said “I’ve heard Man United are in for me and to join a top-four club is what I hope for”, the article probably wouldn’t have appeared on the sight.

I see your point, and rains’s. At least it’s no worse than you’ll read anywhere else, at least. And I’ll add that Sky Sports News took the cake for lack of editorial standards yesterday when it reported on Guardiola’s latest comments regarding Cesc. Their monkey-in-a-suit presenter introduced a story by explaiming something like “Barcelona has been given the go-ahead to negotiate with Cesc Fabregas!” which implies of course that a Arsenal has agreed to a transfer fee. That would have been a truly shocking development. Naturally then Sky’s report and the accompanying quotes in the story contained nothing whatsoever to… Read more »

Whatever happens, I hope that we approach this with more class than Barca have over Fabregas.

You must mean mortons or delaneys squire?

No, Mortons and Delaneys are much futher down Firhouse Road. If you were on the 49 it was right at the corner, opposite that little shopping centre with about 6 shops.

brigit burkes or do you mean the speaker connoly

Shame about campbell. Would’ve been like s new signing.

Arsene would definitely know that it is Bridget Burkes

Can we all agree that players whose Father or Brother is their agent should not be signed. Look at the track record. Anelka, Bendtner and now this Campbell kid (I am sure there are more) His Dad wants more money so he is hoping his son dominates at the Copa America and gets noticed. So instead of coming to Arsenal who are one of the top 5 biggest clubs in the world, he is holding out for something better. Genius! I am not going to wish ill will on he and his son but karma is a bitch. The problem… Read more »

Agree somewhat, but a family member acting as agent makes sense if you view the agents themselves as providing very little value. If a player has to give up a cut of his fees, then he is probably a lot more comfortable handing it over if his Dad is the “Mr. 15%.” And if his dad or brother is not otherwise in a satisfying career and well compensated, then it makes good sense for them, too. It’s at bottom a wealth-maximizing strategy for families of talented individuals, be they sportsmen or child actors. Where it goes wrong, as so often… Read more »

what!!?? i would kill my mother for another anelka signing. 500k in, 25.5 million out!!?? Its prob what wenger dreams of. that and a 25 year old thierry henry turning up for training tomorrow. ‘hey boss, i found the fountain of youth on my holidays in palestine this summer. Dennis is there now, he’ll be over next week to sign. I sent pascal to afganistan in an american football top for a laugh and told him thats where the fountain (of youth) was. I told patrick too but he saiz he suffered from terrible acne when he was younger and… Read more »

I made the mistake of watching this lads you tube video, he looked the business but I’m sure Bendnter looks class in his too. Fuck him I say, if you don’t want to come to The Arsenal too bad, it’s your loss.

Great post mrs.Arseblog,I’m happy with the way Arsenal are doing their shopping.2ndly As we have been told by you about this lad,I think we should go for it.Long life Arsenal and Arseblog!