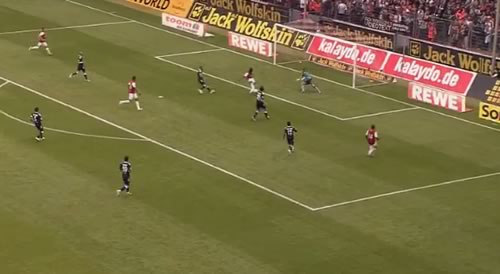 Arsenal continued their pre-season preparations witha 2-1 win over Cologne this afternoon. Arsene Wenger handed new boy Gervinho a start and the Ivorian made a dream start to the game and his Arsenal career. Latching onto a fine Jack Wilshere pass he calmy lobbed home with what was almost his first touch.

The home side had chances early on as Arsenal’s defence seemed to be at sixes and sevens, but it was a mistake by the Cologne right back which helped set up the second. When he missed the ball Theo Walcott drove into the box, put in a low curling cross and again it was Gervinho on hand to slide the ball home to make it 2-0. The new boy was then replaced on 30 minutes by Ryo Miyaichi.

Cologne fashioned a good chance in the 38th minute, pulling the Arsenal defence apart on the break, but Carl Jenkison was on hand to block the shot. Then a careless quick free kick from Aaron Ramsey gifted the ball to the home side, the subsequent shot was saved by Szczesny and span just wide of the far post.

Almost immediately we nearly got a third on the break, Miyaichi played in Walcott behind the defence, but his attempt at a pass to the back post for Chamakh was poor and the Germans cleared.

Cologne got one back with a bizarre own goal from the last kick of the half. Carl Jenkinson did well to track the ball over the top but miskicked his clearance and saw it loop over Szczesny from 25 yards out.

Andrei Arshavin was lively early on, firing a shot straight at the keeper, and producing a magical flick from a Frimpong pass to set up a cross which Cologne defended.

Squillaci and Podolski then squared up in midfield, both players going head to head, and from the resulting free kick the home side fashioned a great chance, aided and abetted by some slack Arsenal defending. Only a last ditch block from Johan Djourou prevented the equaliser.

Cologne then should have equalised, Arsenal’s defence was opened up again, but the shot was tame and straight at Mannone. It was the Italian’s last action as he was replaced by Lukasz Fabianski while Conor Henderson came on at left back in place of Kieran Gibbs.

As the game fizzled out it ended badly for Arsenal and for Henderson who was stretchered off with just a couple of minutes to go after what looked like a serious knee injury. We’ll await further news of that.

It was another good run out for Arsene Wenger’s side, and another win, but the Arsenal manager will want to see his team show signs of more defensive solidity as pre-season progresses.

Watch the goals via Arsenalist or the Arseblog Video page.

Arsenal 4-1 West Ham: By the Numbers

Le Prof ought to set some extra homework in the art of defending.

Looked real nice going forward in first half though.

And to anyone coming from NewsNow, apologies for the scoreline on the headline there, but it’s a nice surprise no?!

Jenkinson, what a finish!

That Gervinho doesn’t fuck about.

Miyaichi and Gervinho both looked good and Jack looked pretty lively. Nice to have some positives to look at with all this doom and gloom about!

It seems defense was never the first choice back line, and yet the only goal allowed was a fluke own-goal. Seriously, if we cut out the fluky defending, I wonder how many more points we’d have had last season?

Just get it out of your system now, Jenkinson.

Plainly Arsene wanted to see if Ramsey could slot in for Cesc. He also gave Nasri a run out in the hole behind RVP. Although both line-ups created chances, neither Ramsey nor Nasri figured in them according to the report.

People have to understand that the team will probably play in a different way without Fabregas, and that’s okay. United play an other way without Ronaldo, and so did Arsenal without Henry. Our play was mainly made to take out the best of Cesc, now we’ll just find another way.

I do wonder how Nasri would do if he was playing with Wilshere and Song in the middle though. May of done better, cuz really he was the only one even switching the field or making long passes in that second half. Not to mention Walcott, Vermaelen, and Gervinho.

When was the last time the phrase “sleek passing and movement” was used in relation to us? Certainly not last season. Could someone who saw the game comment on our movement off the ball?

The biggest problem Arsenal will have this season is left back. Gibbs (as Clichy has done for many years) plays as a left winger. A lot of Cologne’s attacks came down our left with Gibbs stuck uip field. Arsenal need either to tell Gibbs to defend or buy a Left back as opposed to a wing back. We have enough going forward surely.
Aside from the own goal (unlucky in my opinion) Carl Jenkinson had a good game and most notibly seems to be back defending quite often.
Gervinho CLASS!

Hey arseblogger, while I have your attention, what a grand job you do. Thanks.

Jenkinson’s OG was classic! Dixon would be proud

I wonder if gervinho ( corrected: get IMHO ) will get the same treatment as chamakh if he does well until Christmas and then is out of the team. Maybe not, because he wasn’t free. Maybe, because he ONLY cost 11m. Fickle arsenal fans

Chamakh was unlucky in so far as at the beginning of the season he had to play as RVP was injured but when he returnrd fron injury there was no place for him. Watching him today though he was not good as he like Bendtner needs to play in a 4-4-2 formation and he (they incliding Bendy) would be great.

Can you imagine if Theo improves like he did last year. Wilshere, Ramsey and Koscielny, Chamakh and Djourou? We still need a burly centerback but if we can keep Cesc or Nasri we should look good.

Wont be chapped at the boss if he buys more. Mata?

We did okay but we certainly should have controlled the game better in the second 45. Walcott still looks like his old self while Ramsey could get a lot better. Wilshere is pure class and there are a few decent step overs in Miyachi. We do leave a lot of space at the back when we attack though. Frimpong didn’t look too good to be honest.
It does look like we struggle EVERYTIME we have to deal with an opposition attack. Maybe it’s just me anyway. It’s good to have a new player to crow about.
I love The Arsenal

[…] continued yesterday with a 2-1 win over Cologne in Germany – video highlights here. We scored all the goals too. New boy Gervinho kicked off […]

[…] Arsenal have confirmed that youngster Conor Henderson will miss at least 6 months after damaging his cruciate knee ligaments in Arsenal’s 2-1 win over Cologne. […]