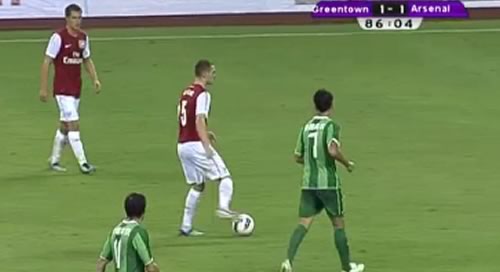 Arsenal concluded their Asian tour today with a 1-1 draw with Chinese side Greentown.

In the pouring rain the Gunners struggled to get going and it was the Chinese side who looked most threatening. Mannone made a very good save in the first couple of minutes and twice they beat Arsenal’s offside trap, one on occasion hitting the post, before a familiar weakness in Arsenal’s game resurfaced.

A free kick was curled in from Arsenal’s right hand side, Vito Mannone saved the header with his jaw, and as the ball bobbled around in the area the Arsenal defence watched as Vazquez trickled it home to make it 1-0. However, set pieces are the easiest thing in football to fix, Arsene just doesn’t want to in order to keep English football competitive.

Arsenal created further chances. An Arshavin cross was volleyed over by van Persie while Samir Nasri volleyed just wide from the edge of the box. And just before half-time Carlos Vela made it 1-1.

Andrei Arshavin’s deliciously sumptuous lip-smacking lob over the top of the Greentown defence found van Persie, the keeper saved his first time volley but the Mexican was on hand to bundle it over the line.

The second half was more competitive and Arsenal fashioned the first chance, a low shot from Aaron Ramsey which the keeper did just enough to push around the post. The Chinese keeper made another good save a few moments later from Kieran Gibbs as Arsenal began to put the pressure on.

Marouane Chamakh was next to have a go but his sidefooted effort was tame and straight at the keeper. Chamakh was then involved in a move to set up Theo Walcott whose first shot was saved before he spooned the rebound over the bar.

Walcott again tested the keeper after Wilshere switched the play beautifully to Chamakh. The Morrocan’s lay off was hit first time and again the keeper did enough to keep it out. And the England international dragged another chance wide as Greentown tired.

Arsenal drew more saves from the keeper, without creating a really clear cut chance, while Greentown looked to hit back on the counter-attack.

In truth though, the game was a fitness exercise and in the end was more boring than Tom Hanks playing Phil Collins in 14 hour biopic directed by that guy who made The English Patient, the world’s most boring film.

Hahaha, If this blog thing ever goes south you could always try stand up comedy.

“Vela laughed to himself”

What? No Denilson? The nerve….

We need CB, if this team scorses from set pieces !

Finally Vela is showing us what he can do

That’s a couple of assists for Arshavin already in preseason. He may still lose the ball 10 times a game but there’s no denying his assist record

I know they are only friendly games and do not mean anything but I think its a shame that we are not experimenting with different formations during these friendly games. It would be perfect time to try out a 442 and see if a Van Persie Walcott partnership could work and be the way forward.

You need the players to do so. Wenger travelled with 22 players (23 if you consider Denilson as a player). In that list you have 2 strikers – Chamakh and RVP, okay, let’s add Walcoot to make it 3. But then, as wingers you just have Miyachi, Rosicky, and Nasri. If you are supposed to give only 45 minutes to each players, then the 4-4-2 will cause you some difficulties. I didn’t mention Arshavin, but he can’t play on the wing in the 4-4-2 formation.

In my opinion our starting line-up should be…
Almunia.
Sagna, Veermealan, Kos, Gibbs.
Nasri, Fabregas(if he stays), Sing (or wilshere).
VPersie, Vela, Chamakh.

You are entitled to your opinion, but Almunia? No chance.. he didn’t even travel mate. Vela and Chamakh are squad players and Wilshere is one of the first names on the team sheet.
Our best 11 is:
GK – Wol
DEF – Sagna, Djou, TV, Gibbs (though I hope a LB and possibly a CB are signed)
MID – Cesc, Song, Wilshire
WINGS – Walcott, Nasri
ST – van Persie

90minutes in the hangzhou humidity will burn all those holiday pies…for the fans and the players!

realise a lot of arsenal fans in uk will see these games here as a bit of a waste, but as a london colney lad living in China, I can tell you the Chinese have been going nuts about Arsenal coming.

From a commercial point of view this tour was a masterpiece. I think the climate may help with fitness also.

Really glad to see Vela start to show what he’s made of I just hope he can carry it on. Let’s face it with AW putting his fingers in his ears and screaming “lalalala” when anyone points out our defensive frailties and his refusal to look at alternative tactics we need everyone on top form.

Dude, climate will help with fitness? What, between October and April?

Wow defensively we looked awful. I wonder what kind of bullshit we’ll be told excusing that?! Beautiful exhibition attacking though.

Arsene, a million flies can’t be wrong, shit must be good. Your defence can’t stop my grandma from hitting a hat-trich…in 10minutes. 28million combined fee for Cahill and Samba is a bargain buy for a team that need their likes badly. Rio cost Man U 30mils a long time ago, so 28 for that pair is downright daylight robbery…and we are the robbers. I join disgruntled Arsenal fans to sing…spend some fucking money.

Watching the game, I couldn’t help but think that it was possible that some benefit would be gained from signing a couple of central defenders and a goalkeeper. Maybe even a defensive coach

I seem to remember saying something similar last season. Usually after every fucking game

Totally agree with ya but still Mannone – Sagna – Squillaci – Djourou – Traore are hardly going to be the starting back line, I only really see Sagna as a guaranteed starter out of that defence, depending on who forges a better partnership with Vermaelen it could be Koscielny or Djourou too.

looking at that game, I feel that not a single lesson seems to have been learnt from last season as regards defensive deficiencies. But is the fact that Djourou and Squilvestre tried to squeeze the opposition with the abnormally high defense line, an indication of their own stupidity, or because they’ve been instructed to do that? I honestly think that Wenger has not got the slightest clue when it comes to defensive tactics. Some sort of defensive tuition is paramount. The defense don’t know when to squeeze, don’t know when to drop off, and we get caught at the back… Read more »

Well, I don’t think Mannone will make the bench, Fabianski is the second choice, Squillaci the fourth as a CB, Djourou the 3rd I guess considering that he played twice KOS with Verma. And, Traoré is not a starter in my opionion, so…

I’ve heard of rose tinted glasses before but Wenger must be looking through some kinda Banana Man Super Hubble Space Telescope with 2billion times rose tint magnification when he looks at this back 4 and says there’s no problems. Individually though you look at those players and they should in theory be world class, with the exception of squillaci and traore. But put them on a field together and there a nervy shambles, is it the coaching? Are they being “trained” to go against all common sense and play these high lines and odd positions? Or maybe cause we’re an… Read more »

lol but our coaches are mostly defenders xD.

1st half was same old same old with us. Same basic mistakes at the back. Thought mannone was at fault for the goal.
The partnership of djourou and squillaci is an accident waiting to happen. Traore looks to have learned nothing from his year in Italy still as frail as ever defensively. 1st 20 mins was worrying I know this is just a friendly but the same mistakes are being made and if not addressed it’s going to be like groundhog day

How i wane for the days of the 970’s and 1980’s – when no-one really gave a shit about results and going to the game was all about having an afternoon at the match. Fuck you Sky.