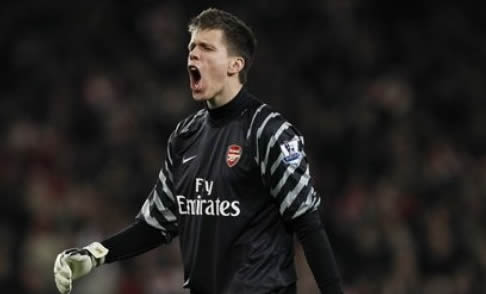 Wojciech Szczesny says the club’s last campaign, and the end of season collapse, has made him resolved to put things right this time.

Arsenal won just two of their last eleven league games, going from a position where the title was in their hands to a final position of fourth, twelve points behind champions Man United.

However, Szczesny is determined to learn from the experience and turn it into something positive. Speaking to Arsenal Player about the new season he said, “I’m very excited and very determined as well. If last season helped me, it helped me in a way that I want much more.

“I don’t want to have the same feeling that I had at the end of last season”.

And he insisted that this attitude is shared by the rest of the squad, saying, “Everyone in the squad is frustrated because of what happened last season. Let’s hope we can take that into this season and make sure that all the mistakes we’ve made are not going to happen again”.

It also looks as if the big keeper has changed his squad number, sporting a number 13 training top during the interview. He is also listed as number 13 in the squad selector on the official site’s online store.

To see the full interview subscribe to Arsenal Player

…..”won just two of their last eleven league games” Kills me everytime.
Wojciech – just sit and watch the last minute of the League Cup Final – that should help you “learn from last season”.

Koscielny’s fault. Szczesny shouted to leave it, kos should’ve ignored him and booted the ball as hard as he could, preferably straight into Barry Ferguson’s face.

Possibly, but god help either of ’em if it happens again.

Without an experienced goalkeeper such a Shay Given added to the squad… This season will again promise much but deliver little. It is the single most important position that we need to strengthen and my faith in Wenger will be decided by this decision above all others…

Do you want Szczesny to be killed?

No 13. Unlucky for Almunia.

Hope he’ll get the No 1 jersey after we ship out the haunted Spaniard (the sooner the better).