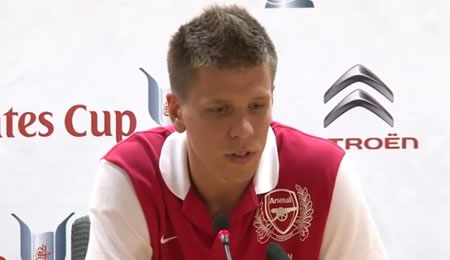 Arsenal goalkeeper Wojciech Szczesny says the team have been working hard to correct the set-piece weakness that has plagued Arsenal’s defence.

Last season Arsenal conceded more goals from set-pieces than any other team, a whopping 56% of their total goals conceded, and the pre-season preparations have obviously focused on this.

Speaking ahead of the Emirates Cup, Szczesny said “I think you might see a little change of tactics tomorrow. Yes, we have been working on it, and I believe it’s working.

I genuinely believe it’s going to get much better this season”.

When asked if criticism of Arsenal’s defensive record hurt, he said, “It made us more determined to work hard on our weaknesses. With corners/set-pieces, you have to take individual responsibility, but also the organisation is very important as well.

We’ve changed that a little bit, we have players who can lead and organise, so I see no reason why we should concede goals from set-pieces”.

With Carl Jenkinson the only defensive recruit since the end of last season Arsenal fans will be hoping Szczesny’s confidence is well placed and that the work on the training ground is as effective as he maintains.

The Polish international also re-iterated his desire to maintain his position as Arsenal’s number 1. With compatriot Lukasz Fabianski fit again, and with Euro 2012 being partly hosted in Poland, both keepers have no shortage of motivation for the season ahead.

See the full interview, alongside Arsene Wenger, on Arsenal Player.

Possibly funniest post this summer. Keep it up sunshine.

It’s what Arsène said last year, it’s worse to be shit defensively in open play than in set-pieces as you can just train on set-pieces until you learn to defend them properly.

Wenger said that this year and it needs a pre-season to adjust the set-piece defending it seems….Houllier said about Villa defending in a post match interview…………Villa used something but he wanted something else,,,,so he said only off season you can adjust the set pieces to the interviewer….He said that after Villa vs Bolton game where Cahill scored a brace…….

“…a little change of tactics…”

People always think Arsenal will never win anything, but if we just sort out this set piece BS then we’d be conceding half the goals we do. Cut our goals conceded stats in half, add Gervinho and possibly Mata (I don’t think Cesc will go this year) and our team is very strong looking in my opinion.

[…] on the training ground this summer and trying to sort out the weakeness we have with set-pieces. He says: Yes, we have been working on it, and I believe it’s working. I genuinely believe it’s going to […]

From the Boca game looks like Arsene and the defenders learned nothing. Rarely won balls from set pieces. First goal squillaci gave ball away. Second was a hole between squillaci and djourou followed by a missed tackle by djourou. Messy. I did like what I saw from koscielny in the first half. His passes created a lot if great counter attacks.

yeah,but what use does it really make,when we only have players who cannot cross the ball?
I mean,it isn’t that difficult to look like a decent side,when you only have to defend a set-piece taken by an Arsenal player!

Some good, some bad, same as it ever was « Arseblog … an Arsenal blog

[…] Beyond that not a lot going on, and to finish on a positive, we faced quite a number of corners and didn’t concede once! SZCZ was right. […]

[…] to a dysfunctional unit solves the problem. It takes hard work on the training ground and there’s been talk of that already. From the pre-season games it looks as if a zonal marking system is going to be used which I think […]