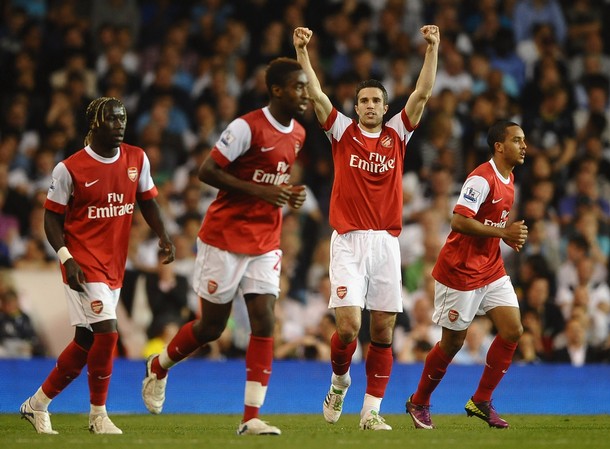 Robin van Persie has spoken publically about his desire to see new faces added to the Arsenal squad and made clear that competition for places will only make the Gunners stronger.

Speaking to the media in Kuala Lumpur the Dutch striker reflected openly about his manager entering the transfer window ahead of the new season.

“The way I feel now is that a few signings are more than welcome. Every other team is buying quality players, so hopefully we will do the same.

“You need investment to keep up. When you look around, you see Manchester City are buying loads of good players, Liverpool are doing it now and Manchester United have been doing it for years.

“In a way, you need to keep that up because if everyone is doing something you need to do it as well. I think it’s a good thing that we have competition because no one really wants to go to sleep.

“In an ideal world, no one (should be) really sure of his place (in the team). Maybe the captain and the goalkeeper but all the other players shouldn’t really know before that they will play. It’s always good to have competition and be on your toes.”

Reflecting on the fact that in the current climate it requires big money to make quality acquisitions, the 26-year-old stressed that financial sacrifices may need  to be made if Arsenal are to remain competitive at the highest level.

“These days, proper players cost money. Sometimes you see players go for loads of money and you think, “Is he that good?” They are, most of the time, but sometimes there can be a statement for the others as well.

“The main thing is, it is not just a label, a multi-million pound signing. It’s about the quality. If you buy a player who has got one year left, normally he’s not going to be worth 40 or 50 million, he’ll be a bit less.”

With a great deal of speculation linking Samir Nasri and Cesc Fabregas with a move away from the Emirates, the Dutchman also took the time to ponder a potential future at the Emirates without the Spaniard.

“I think it will be hard [for me if he goes],” confessed the hitman.

“If I speak about my situation, he is the first one I look at if he is playing or not. We have a connection together, he knows exactly when to pass, when to make his decisions. In his mind, he is quicker than most other players and that is very special.

“For example, against Blackpool away [last season], he gave me four or five unbelievable passes in the first 18 minutes. I missed them but he gave them to me.

“He is a special player, he can see things quicker than others. He will be a miss for any team, that’s why I hope that he stays and we can play a bit longer together.”

Nothing hugely out of the ordinary from RVP – the last para shows some sense of perspective. However, these sentiments worry me.

Why do they worry you @sniff?

At a guess, I’ d say Sniff speaks of a fear that a quality supplier and orchestrater such as Fabrgegas would be missed; as a supplier of Van Persie’s finishing and as a rightly respected influence of presence on the pitch.Fabregas may not be a shouter but he talks with his attitude towards the game with his feet. He is a winner. I think that Van Persie fears we are not committing as a club, as a team, towards those with the skill, presence and authority that those with serious ambition must have to push past also rans to winners.

It shows that even RvP has the same feeling as most of the fans. We need quality and it may require spending a little more than we are used to. If he feels that way, image how frustrated he’ll get if there are no replacements and the fans continue to get upset too

They worry me as well because as more contracts begin to run down if we dont show our intent we will have the nasri situation every year with our big players. RVP and Walcott next summer will have 12 months left on their contracts if I am not mistaken.

Well said RVP. If the fans and the players want the club to invest, then why hesitate? Obviously don’t blow the savings but invest in some experienced internationals or something.

Nasri and Cesc both Signed elsewhere last week if you belive the papers…. all this in a week where the Media has admitted to being lying cheating scum, with the credibility of Adebayors badge kissing – yet all they say is gobbled up…?

Which papers announed the signings of Eduardo or Vermeallen…? None, Why? because they don’t actually have a clue what is going on behind closed doors despite what you read.

It’s worrisome because between the lines it sounds like, “without Cesc, and new expensive signings, I want out”.

Now that the grand Ayatollah has given up, now that the the “come & win trophies in Man U” he orchestrated through his new mouth pieces Scholes and Garry Neville has fallen on deaf ears, now that all the lies and inventions printed in the past weeks have proven fiction (who claimed every other day that Nasri had JOINED United or City),… CAN WE NOW SHELVE THIS? Unfortunately for some, Van Persie also has spoken, yet not even a remote hint of a “Transfer Requester”, another invention by the same bunch. Oh, what happened to Wallcot’s move to Chelsea? I… Read more »

make RvP our director of football and we’ll get arsenal back on track with competition for places, reduced wages and new signings.
btw last time henry advised wenger to buy someone, he missed several games

To those United fans who have been drooling and pining for Nasri every day, sorry, it was just a dream! As for some who “don’t understand” why, well; that may have to do with other aspects I don’t wish to mention out of courtesy (thinking has something to do with it though), but here is a hint: MAYBE he wants to be with a club that will still be up there in a few years time, and not so much in debt that can not be sustained beyond 1-3 years (after all, he is only 23 – when mighty United… Read more »

Wenger will do his usual and do nothing about it. The club looks ready to implode. vP is a gooner at heart and for me we need to do whatever it takes to keep him and Cesc. If that means changing philosophy which to be frank is failing on it’s arse then so be it. I would just like to hope someone from the club pays attention. They don’t seem to care what the fans think but maybe they’ll listen to vP

Time for the club to shit or get off the pot.

Keep Cesc, sell Nasri and use the money to reinvest wisely, and in experience, where we need it.

That increases the chances of both winning trophies and keeping the important core of this team together.

Very much a crossroads summer for both AW and the club.

The return of Thomas Vermaelen makes a huge difference to Arsenal. With Sczeczny, Vermaelen, Cesc and Robinrunning down the centre of the team, they are extremely formidable. Without even mentioning world class talent like Alex, Abou, Jack, Aaron, Andriy, Theo, and yes Samir: Arsenal are a very serious outfit, and our needs in the transfer market are considerably overstated by newspapers in need of something to do in the close season. And willsomeone like Gary Cahill really make a big improvement? Who else would? The truth is that there are very few players out there we can add that will… Read more »

“[W]ill someone like Gary Cahill really make a big improvement [to the squad]? Who else would? The truth is that there are very few players out there we can add that will make any significant improvement. I don’t think Gary Cahill is one of them.” I agree with you on this point, specifically regarding Cahill, but also regarding how many players can add quality to the team. Very few can improve the First XI, and fewer still are available at any price. Gibbs will need to do plenty to convince he is an able left-back in the premier league, but… Read more »

Wilshere: If you are loyal, it means you are a real man | Arseblog News – the one stop Arsenal news site

[…] comments made by Van Persie yesterday that the club need to make new signings to help end the six year trophy drought, Wilshere […]

Players should really keep their mouth shut when it comes to buying players, how would V Persie like it if we brought a new striker to replace him? who is he saying needs replacing? Arshavin? maybe he should tell him at training tomorrow what he thinks of him? My point is players always want a club to invest in new players as long as its not in there position.