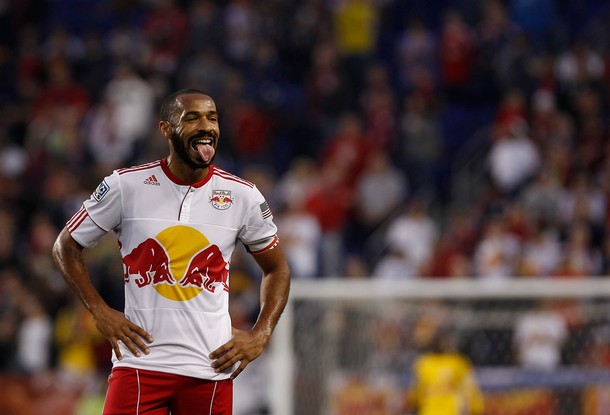 Theo Walcott has revealed his excitement at playing against former mentor Thierry Henry in the Emirates Cup but admitted that he has rarely had the chance to talk with the Frenchman since he left Arsenal in 2007.

Henry took the Southampton protégé under his wing when he moved to Highbury as a 16-year-old at a time when many predicted the young England winger to be a potential long-term challenger to his record-breaking Gunners scoring tally.

While Walcott has shown flashes of brilliance during his five years in North London he has yet to shake off persistent injury problems or find the penalty box consistency which made Henry one of the most exciting players of his generation.

Reflecting on his relationship with the Gallic great, Walcott told Arsenal.com: “He’s been a great influence to me so it will be nice to see his face.

“I think he changes his phone number a lot so it’s tough to keep in touch with him! So many people want a bit of him but he will always be there for me, definitely.

While Walcott readies himself for a reunion with his old mentor, the 22-year-old also took the time to analyse the qualities shown by Arsene Wenger’s latest wing acquisition; 18-year-old Japanese starlet Ryo Miyaichi.

“I don’t like comparing myself to other players, every player is different. He wants to be his own player, he is a confident lad and will hopefully have a good career at Arsenal.

“He has got a few stepovers more than me, I don’t do any! That is maybe something I could bring into my game.

Miyaichi, who spent six months on loan at Dutch side Feyenoord earlier in the year, has yet to secure a work permit allowing him to play for Arsenal in the Premier League. However, after a noteworthy debut for the Gunners against Malaysia on the recent pre-season tour of Asia, excitement has already mounted about the winger’s raw speed.

Recognising the challenge to his status as the club’s fastest player, Walcott continued: “If I don’t come top [of the speed tests in pre-season] I’m not bothered because the most important thing is doing it on the pitch. But it will be tough to beat me, that is for sure!”

judging by the photo, it looks like someone needs to tell Henry the “WAZZUUP” thing died a long time ago (and it was always fucking shit anyway).

ny friend made that advert, i think its awesome…another bitter pre-season comment…

are arsenal fans the most sour fans around? im looking forward to another season! proud to be fan of a club who dont spend trillions on whatever player is hyped by the tabloids

No one needs to tell henry anything… He doesn’t do things, He creates them. He’s truly untouchable after what he’s done for Arsenal and the game of Football.

He is doing the haka.. Blaaaahhhhhh!!!

Maybe he could eat Nasri as a example of what happens to greedy cunts when they fuck about with Arsenal. I suggest he does it on the centre spot before they kick off.

Maybe I could suggest laying off the stepovers until you master the final ball Theo…..call me old fashioned…

The Wasp
Reply to  Matt

as well as ‘controlling’ the ball too…

get a dog up yee Thiery.

Legend. How we miss him now.

Thierry Henry, making the face we all want to make at Barca’s negotiators when they try to gain access to the Emirates for negotiations concerning another Arsenal captain.
Hopefully he’ll be back to us soon in a coaching capacity, so he can show Paddy what loyalty looks like. Although I’d prefer a certain Dutch God on the bench, his phobias about flying kind of preclude him traveling with the team all the time.

Great post like always Arseblog.Its Good to hear about Miyahchi,it’ll be a good challenges to some of our players.Up Gunners!

When Theo is at his best, he reminds me of Henry.

Miyachi, is just another “prospect” at the moment.

Good bloke you read my mind. I think Theo and the other young lads have suffered from not having him and other experienced world class guys around. Imagine Theo if he’d had Bergkamp or Henry coaching him…..

Oh and to the guy who commented on theo’s final ball, while it does need improving I’d go back and look at vP’s goals last season and see who set him up for a good chunk of them.