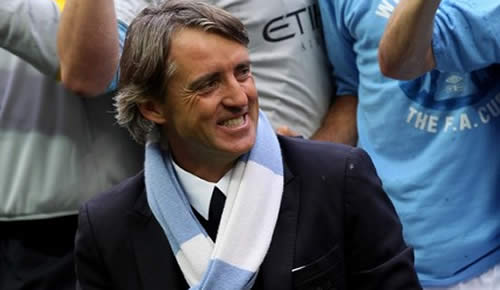 Arsene Wenger has hit out at Manchester City manager Roberto Mancini after comments the Italian made about Samir Nasri.

The French international has been strongly linked with a move to the Middle Eastlands Etihad £400m Taking The Piss Out Of FPP Stadium and Mancini said “I don’t know the situation but for Nasri it is difficult. I hope that we can buy because we need other players, and I hope that this player can arrive before the end of the month”.

After Arsenal’s 1-1 draw with Chinese side Hangzhou Greentown Wenger was less than pleased with his scarf loving counterpart, accusing him, like Xavi earlier in the week, of being ‘disprespectful’.

“I think the comments are not allowed. They are against the basic rules of football and he should be informed”, he said. “What we want is respect and we don’t make these comments about players who are under contract at other clubs.

“Disrespectful? I cannot say otherwise. This comment is absolutely out of order but I don’t give it more importance than that”.

Nasri played for 45 minutes against Greentown and almost scored with a swivellng volley from the edge of the box. However Mancini’s comments make it quite clear that City haven’t given up on signing him despite Wenger’s insistence this week that the former Marseille man would be staying for the forthcoming season.

The big picture problem is that UEFA does not fine these teams for “tapping up” players. How can Barcelona get away with it. When Wenger is asked about a player he usually replies with, ” Yes he is very talented but he plays for another team and is undercontract so it is not for me to say.” Diplomatic. When Barca and ManCity speak it is like your brother eyeing your plate of food at the dinner table.

I am really starting to dislike City now…UEFA do your fucking job!

yeah, come on Uefa, protect the Old Guard. We don’t like newcomers with ambition as they might deprive us of our Champions League income that we have a God given right to as we have been coining it in for years on end.

U dicks get real
Reply to  CyganButNotForgotten

Where were UEFA when City said this: “We have always stressed that we want Shaun to stay at Manchester City and Shaun himself has always been adamant that he is happy here as the club continue to build on the excellent progress made under the leadership of Stuart Pearce. We do not encourage any bids for Shaun and both the club and the player remain firmly focused on our preparations for the new season.” Then Winger said this: “I like Wright-Phillips very much, but we are in a transfer market where you first have to let Chelsea make decisions and… Read more »

@u dicks get real

The shit barca and mancini are saying is far worse than the quote from Wenger there. In fact, he was being diplomatic in his admiration of SWP

U dick get real
Reply to  CyganButNotForgotten

The fact is Mancini never actually said anything like Nasri will sign by the end of the month only that basically he hopes the players already mentioned in the interview will be signed by then! Watch the interview first it’s twisted by the media and then Wenger uses it as a smoke screen as another Arsenal player goes out of the club, Arsenal fans may say who cares it’s only Denilson but it’s another squad player not being replaced.

The cause of all the trouble is the stupid Bosman ruling. Its unfair to loyal players,clubs and fans. Based on football being a normal business! Have choked on that one? sorry I understand!

i can understand that macini’s inability to speak english language fluently is turning him to a stupid man.

Why the fuck are Shitty scum all over the site?

Cos we are city and we do what we like robin! now shut the fuck up u twat

I think you will find that the deal is currently in negotiations over Wenger’s head. Mancini never says anything bad about other managers.

But. Mancini didn’t need to say anything, but he did, because Wenger should have kept his mouth shut about the Etihad sponsorship.

Wenger has his own problems at the moment, and he is trying to deflect them to someone else. This will definately be his last season as Arsenal coach. He has lost the board and the plot.

It’s nice that someone in a position to make the decision on Wenger’s status as Arsenal manager comes on here to talk to us.

Whatever about the Nasri thing, the stadium naming rights thing is a load of bollocks, and designed to flaunt FFP.

However, I think FFP is a load of bollocks too and Platini is a cunt so nobody wins.

I think that Mansini can speak the language better than sharp! And why does the web allow such weak language?

” Yes he is very talented but he plays for another team and is undercontract so it is not for me to say.” It is still an unsettling tactic and everyone knows what it means between the lines. Wenger probably asks for the question to be asked just so he can say it and make the player aware he is interested although with the scummy agents these days everyone knows everything. Just have the guts to accept that if your team is falling from grace and the club appears to be doing precious little about it then other clubs are… Read more »

Regarding the issue with samir nasri and cesc with other teams playing pranks, we have been pushed to the wall too often lately,it is about time mighty arsenal fc ,made a statement ,a proper statement. ,those kind of statements you make to keep all the gossips quashed. the barca mugs , want cesc on the cheap ,i mean what does the mayor got to do with football saying cesc is been kidnaped,it is quite scandalous to make such statements without proper facts.cesc is our captain ,the team was built around him,he came to us willingly ,these people are so dumb… Read more »

Arsene Wenger seems to be permanently angry. Shame, he has a wonderful smile.

mancini’s imbecilic attempt at tapping up comes straight from the gary cook book of classless jibing. Watch how there’ll be a similar gormless attempt at getting back at Liverpool for questioning the etihad sponsorhip deal.

nice deflection, did u get that from arsene?

Of course AFC and Liverpool have a full detailed breakdown of our sponsorship deal, they got it from The Daily Mail and The Sun etc………………..

PS, only ‘classless’ people use that word, a bit like ‘common’.

Citeh again behave like the rules don’t apply to them, While this isn’t as blatant as the questionable stadium renaming deal, its still in that grey area of football rules regarding players under contract.
Citeh think that their money will let them get away with anything. And, as much as it pains me to say this, until the major leagues in Europe become closed leagues with salary caps for player wages, this sort of thing will continue to be a problem.

I have no problem with selling Nasri, but he’ll learn soon enough what we already know and that is Mancini is a twat.

How many bloody players do Man City need? Ever since the the Sheikh Moneybags came in, all the City managers have spent money like drunken sailors.

How about City trying to win something by developing the players they already have, rather than just trying to buy any half decent player that is mentioned in the press?

Why don’t u city twats go and wank off about all the players you can add to the many youve wasted money on already before u say it’s jealousy….it ain’t,it’s about principles!

Dougiefresh,your obviously a bit of an intellect,cheers for the input,off now to crack one off over Santa cruz

Haha, I’ve got to say i don’t really agree with the way city as a team have gone about their business. But i have no problem with your supporters, you have wit and give smart opinions without spouting the usual garbage we get from the spuds, united and chelsea fans

Playing Devil’s Advocate now and as such I’m going to list points rather than structure. It’s too early to be thinking. Yes RM’s comments were perhaps thoughtless but no I don’t think it’s fair to say he’s tapping him up. AW needs wake up and smell the coffee. Yes City have taken the piss with vowel, consonant and a few random letters please Carol stadium naming fiasco but UEFA will let them. So rather than sound like the old fart in a park going on about how it was in ‘My day’ we need to realise times have changed and… Read more »

[…] about Samir Nasri. Scarfcini said he hoped to have the signing wrapped up by the end of the month, Wenger said: “Disrespectful? I cannot say otherwise. This comment is absolutely out of order but I don’t […]

I don’t get this ‘reporting to UEFA/FIFA/FA thing – don’t they have tvs of theor own? They can see and hear the rules being broken, why does the offended club have to take action?

Enjoyed a City supporter text on SSN yesterday condemning Tevez as ‘a mercenary’. Without a trace of irony. I think City supporters have lost the right to use that phrase. They are no longer a football club in the true sense.

I’m starting to get pretty pissed off now. I’ve ignored most of the transfer gossip this summer, i love my horse racing so i generalllt switch off from football between May and September. But im gettig really fucking annoyed at all these clubs trying to take the piss and stating openly that they want this player and that player. I shows a lack of both class and respect to my great club. Who the FUCK are Man City?

U dick get real
Reply to  Professor Plum

They’re the team that finished the season above you, you cunt LOL

[…] make you wonder all right. Perhaps, if you thought about it, you’d cast your mind back to the comments that Arsene made about Mancini back in mid-July after the City manager spoke openly about signing Nasri. I think the […]