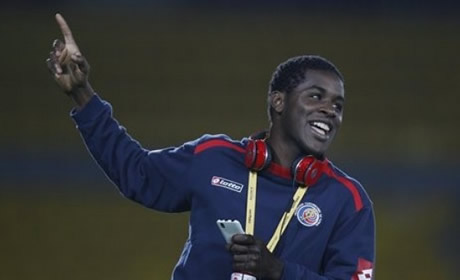 Campbell has been linked with us for some time now, first broken by Gunnerblog, only for the deal to hit a snag when he failed to show for scheduled talks.

Now it appears all the problems have been ironed out and Arsene Wenger said, “Joel Campbell has already shown that he is a player with great ability, and has also performed well on the international stage at a young age.

“We look forward to the formalities of the transfer being completed and working with Joel when he joins us at Arsenal.”

The deal is still subject to ‘formal agreements and processes’ and Campbell, like Ryo Miyaichi, will need an ‘exceptional talent’ visa to play with the Gunners this season.

Campbell played in the U20 World Cup for Costa Rica, scoring twice.

Yes. Good. No harm in having another promising player at the club. He seems good. I think Wenger and the board are testing our nerve though because another teenager is not the most pressing concern for the team – it’s almost like he is trolling us.

Well at least he’s a defender… wait. What?

Whats the chances of a work permit?

But wasn’t there some cind of rule that says that a english football club can get only one work permit for a player per season ?

No, the rule is you can only apply for one exceptional talent visa per player per season

Didn’t this insolent little prick and his old man, already fuck us about this window!?

He better be fucking good.

No, the rule is you can only apply for one exceptional talent visa per player per season…

Anyway, he doesn’t half score some decent finishes.

That was the same finish shown from 10 different angles

Watched him play at the Under 20’s WC and he will be a big player for us in a few years time. He’s big, strong, some technical ability but still very raw. He will be a project for Wenger but he could be moulded into a strong powerful striker sort of like Ballotelli minus the attitude.

That’s the striker we’re getting guys.

Looks to have great technique and finishing ability.
We seem to be gathering pace as far as signings are concerned, now for a CB (anyone we’ve been linked with other than Scott Dann please!)

Looks like an ignorant goalscoring prick. Just what we need

Let’s check his DNA. No Barca smeg there, right?

Better than Balotelli? BETTER YOU ALL FUCK!
AS LORD CUNT COMMANDS!!!!

Looks a good prospect and not afraid to shoot from distance. He’ll be a good replacement for those on there way out

I like his nickname “THE PANTHER”……………..and he seems to have the attitude to go with it, but may be loaned out for at least half the season!

We’ve had quite a bit of success with players called Campbell. Hopefully another one to add to the list.

Here’s to another Kevin.

I half expect Mr Wenger’s next Arsenal press conference to include a scene where he wheels out a pregnant lady, smears her belly with ultrasound gel, pops a camera on to her abdomen, point the journos to an adjacent monitor and then announce his answer to the Cesc & Nasri saga.

If only we put Cesc out to stud. Minus the newspaper headlines, of course.

I can’t believe he’s signed a 19 year old winger….. actually forget it. I’m really excited about this lad. He can score freekicks!

Can he play centre half?

The Panther!
Pink by any chance.
Does your dog bite?
No.
Argh!
That is n
That

The 2-2-6 formation’s coming together well.

Cunting iPhone.
That’s is not my dog
How to totally ruin an awesome gag.
*rolls eyes*

John B.
Reply to  Jth

Actually, it was funny the way it was. Looked like you had a stutter and just gave up on a joke that was hopeless anyway.

looks quality, been really hoping we sign this kid. no doubt going to be a bit of a shock when he comes up against the likes of vidic judging by the quality of the defences he’s come up against in the various videos of him on youtube

So… do you just pronounce his name like in English? How do they say it in Spanish?

I would guess “Hole”. But I think he’s of British ancestry (not recently enough for a WP, sadly) so I’ll pronounce it like I sees it.

Campbell is probably the same. I have a friend from Mexico whose name is Joel, and he and his family pronounce it “Jo-ELL”, emphasis on the “el.”

In absence of any other news, this is a welcomed announcement. Welcome to the arsenal, joel.

How can Cesc, Nasri possibly ever want to leave when Arsenal keep make statements of intent like this, or AOC!!

Proven world class talent… They must be mad to want to leave.

Same was said when cesc came in for paddy v, and look how that turned out? Are you cashly cunt in disguise?!

I think this has nothing to do with Cesc or Nasri, so let’s leave that for other threads. On the merits, the player has shown suspect maturity, and blistering pace and ability to play direct in the final third. Hang on, who’s Joel Campbell? I was talking about Carlos Vela.

Kidding. All I mean is, he could go either way.

Can he play central defence? Is he super super quality? Is he experienced in the prem /champ league?!?

If the answer to any of the above is no
His signing is of no real value to the team this season.

Wouldn’t it be nice to see some finished articles for once?!?

I like the look of this lad. I think Wenger wants the youngest squad in history!!

I think he will be a big Arsenal star!

Looks good. keep it coming though, Arsene. This youth movement is making me twitchy

I CAN’T BELIEVE HE SIGNED ANOTHER TEENAGER, THE CUNT!!!!

How can Cesc, Nasri, Hleb, Veira, Henry possibly wanna leave an ambitious club like us with teanage signings like this to show our intent as a major force to be reckoned with??

Fuck Greedy Nasri, Downing, Jones, Ash Young, Clichy, Enrique, Henderson et al…….. Ryo, The Ox, Joel, I mean how exciting can it get??? Raw, fast, exciting, where would you rather be? One defender, one ces replacement to come, seriously THIS IS IT!!!!!! IN WENGER WE TRUST!!!!!!!

I’m really excited about this signing. Genuinely! I see him a much cheaper but altogether better version of Jermaine Defoe.

If he fulfils his potential I can see him being a fan favourite by 2013, club captain by 2014 and club legend by 2015. Then we’ll be able to sell him to Barcelona for a fraction of his actual value by 2016. All part of the master plan.

Simply cannot forgive Arsene for not signing a fuckin centre back before the start of the season!! Our team is weaker than last season for crying out loud!!!

What’s the big deal? Verminator plus Kosc/Djour v Newcastle with a signing defo on the way? Why the anger? We didn’t have Verm last year so surely we are stronger?

True, Verm is back but I fear who will partner him, Kos/Djour are simply not good enough, we have lost Clichy and not replaced – Gibbs? Dont think so, could have got Enrique, but once again an opportunity missed. No Nasri, No Cesc, will be without Wilshire for the at least the 1st game, who will play in our midfield tomorrow? I trully dread to think. Cesc/Nasri situation was inevitable so why not sort at start of summer and replace during pre-season? RVP once again on his own. Same old shit. Top 6 this season if we are lucky. FACT

Saying fact in capitals after stating your own (rather ridiculous) opinion doesn’t make it so.

How can you say that ?? All we have lost (so far) is clichy we have gained vermarlen (god I sound like wenger) we have a established keeper have signed gervinho and I have a feeling oxlade will feature a fair bit. We have seen the emergence of wilshire and Rambo looks like he is fully fit and has had no I’ll effects from his snapped leg

Verm and Sagna are our only 2 world class defenders, I like Szez, but he is not established, Gervinho looks promising yes but how can you prioritise that position when you know Cesc and Nasri will not feature in this season. Do me a favour and give me the starting 11 for tomorrwow…

Traore will start if Gibbs fails his fitness test. Arshavin might take one of Rosicky/Walcott/Ramsey place.

The things i really like about this lad are
1. He’s inexperienced
2. He’s young
3. He cant play centre back and midfield
4. He probably wont get a work permit this season,which leads to…
5. He would be loaned out.
That makes him the perfect signing. Wenger, good job there, keep it up.

We need back up in the striker position. Must your impatience for the obvious need for a central defender overwhelm the joy we should be feeling for signing a much wanted young striker? Do you really think we won’t sign a central defender?

But why havent we already?! Look at the other teams, they replace what they need, Fergie, Kenny, Mancini. Are you seriously not sceptical of our chances this season??

Like this alot Arsenalizer, nail hit firmly on the head

Such a cunt called wenger.

I feel bad for all these people who are trying to remain positive, I was once like that, but I have had enough. Its fuckin excrutiating.

Wenger says his defence dosnt need strengthening, cunt. As long as squillachi remains an arsenal player, be sure 2 pick d ball out of the net a lot of times

Squill, Kos and Djour all average. Look at Fergie, has 2 of the best defenders in the world and he still brings in Jones, thats how you manage and build a squad. Wenger is just bitter that he spent £16 mill on kos ans squill last season and they are shite.

Hey everybody! Great team we have…WOW ..so good to be here. Think next season we’re a shoe in.