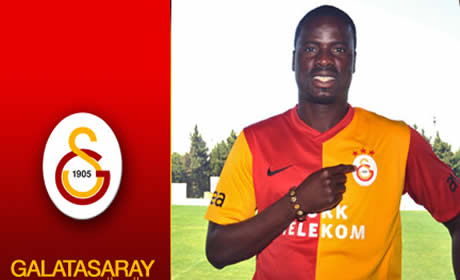 Arsenal have confirmed that they have agreed terms with Galatasaray over the sale of Emmanuel Eboue. The Turkish giants announced it on their official site yesterday.

Eboue completed his medical in Turkey this morning and the deal will go through ‘subject to the completion of formal legal agreements and registration processes’.

how much coin we getting for him?

Cult hero who genuinely loved the club, best for him and us to go. Good luck Manu!

What have Galatasaray got themselves into CHUMPS!

Gna miss him for some strange reason, he’s given me some giggles in the past! Good luck manu!

Plays with a smile on his face, but then again, a horrendous cheat. Hard to know how I will remember him, but one of a kind I suppose. Good luck to him anyway.

My sentiments exactly. Talented, but probably never had the right focus on the pitch.

Booo I’ll have to get a new shirt now! Well i liked him anyway… one of a kind 🙂 All the best funny fella! x

Eboue GONE! That’s it, I am going to start panicking.

At last!! One of our worst ever players.

See you mate and can you hold the door open for the horse face cunt Nasri so you can smash into his head.

Good bloke and a good time to leave not lets trust the boss to do the right thing and buy some good guys in and lets all shout for the ARSENAL tonight !!!!!!

I only came to see eboue 🙁

Ps nasri is a cunt

Squad depth is really lacking now…some new faces surley have to come in. This is worrying. Because Wilshere and Diaby are going to return like ‘new signings’, Gervinho as well when his suspension is up.

Joke footballer. Happy to pick up his pay check and not apply himself. Everything that’s wrong with a modern footballer in my opinion. Has made millions through mediocrity. Good bye. Bendtner next please.

one of the few of our footballer who can give 5 mn to the fan with a smile even when fan like you slag him off everytime. after a defeat he stay few min behind to thanks the fan and give his shirt while our suppose superstar runaway

nobody say he was a great footballer, but if half of our player had half the heart of eboue we would have been champion last year.
cya eboue you will be miss

So long, won’t miss your diving, will miss your attitude. When all the fans were on your back, you got your head down and worked hard.

What will we sing now? “You’ve only come to see Diaby”?

How can this happen FFS?? This proves Wenger has lost it! He was the one who decided to build a team around him and now he leaves before his prime to go back…..hold on…….Eboue? Sorry, wrong thread…

this will forever be my favourite eboue moment
http://www.youtube.com/watch?v=n5mj0Huxajk

I’ve never recovered from the red card at White Hart Lane a few seasons back. I wish him all the luck, but not sad to see him go

noooooooooooo!!, fabregas leaving i could just about handle but eboue hell no, how could you do this to us(me) Arsené.
Right wenger has clearly lost the plot, time for someone to tell Stan the manager has surely gone bonkers, firstly forgetting to sit in the dug out last night, then trying to telephatically control the team from the stands (no wonder we got 2 injuries), then selling players as if they will automatically leave a replacement, he’s gonna be sectioned by Uefa anytime me thinks.

i like eboue. hes a great comedian. 1 of the few that can lift the atmosphere in the dressing room.

Arsenal 1-0 Udinese « Up The Arsenal

[…] player who won’t be involved are Emmanuel Eboue & Carlos Vela, the former completed his switch to Galatasaray yesterday & the later has gone on a season long loan to Real […]

My Fav Eboue moment, still gotta be him listening to the Korean manager giving instructions on the sidelines to his player and appearing to understand and agree, classic pisstake. I would rather have kept Eboue, useful utility player.

I agree best moment of the world cup mmmm apart from when spain brought the germans back down to earth!

What can u say bout eboue other than out and out fucking lunatic!not the best player but a great character.the man will be missed.