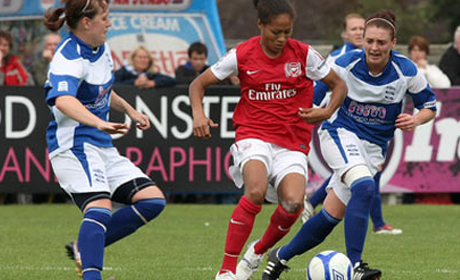 Arsenal ladies continued their Super League campaign with a hard-fought 1-1 draw away to Birmingham City.  Both teams knew that a win for either side would see them top the table, and while the draw was a decent result, the news that Lincoln had defeated Everton in what can only be described as a shock result made the point seem even better.  Arsenal currently lie in second place, two points behind Birmingham City but have a game in hand.

Birmingham made a surprise change to their starting 11 with Scheuber coming in for Susi on the left wing while for Arsenal Fleeting and Ludlow made way for Nobbs and Ellen White. The first half was quite calm and betrayed the importance of this top of the table clash, certainly not featuring the tough tackling of the recent game against Everton.  This was probably due to the close connection of both clubs with both teams featuring ex-players from the other side and coaches having also worked for both clubs.

Birmingham took the lead in the first half after an uncharacteristic error by Arsenal keeper Byrne who failed to clear a back pass properly.  Her clearance went straight to Carney who then released Williams who scored her 12th goal in 12 games this season.  Her low drive was clinical and left Byrne with no chance of making the save.  From there, Birmingham went on to dominate the first half as Arsenal struggled to get their passing game going.

Changes were made early in the second half as Arsenal knew they had to get at least a point from the game and the introduction of Ludlow in place of the young Nobbs in the first minute of the second half added energy and experience to the Arsenal midfield.  Her presence had a visible effect on the Arsenal side but they still struggled to find the cutting edge which was so desperately needed to open up a disciplined Birmingham defence.  A second change on the hour mark, with Fleeting coming on for White, saw Arsenal push hard for the equaliser.

Fleeting wasted no time in making herself known to the Birmingham defence and succeeded in winning a number of headers and generally making a nuisance of herself.  Birmingham sat back and attempted to hit Arsenal on the break and were unlucky not to add a second as Arsenal were caught and Carney’s drive was tipped on to the bar by Byrne, but the equaliser finally arrived for Arsenal following a large period of domination.  Ludlow played a delightful through ball to Little who struck it sweetly past the outstretched Hourihan.

From there Arsenal pushed on in search of the winner which would have seen them top the table but despite constant pressing and domination they were unable to find their way through for a second time.

With only a few games left in the season, this point keeps Arsenal right in the hunt for their 13th league title.

Arsenal ladies next match is at home to Doncaster Belles on Sunday 14th August, kick-off 2pm.

Welcome LadyArse!!! looking forward to all the news to come

Those girls certainly know when to score….oh yeah

yes wenger should sign quality beautifull woman ,this team will win nothing ,wenger promise us fit women who can play football and we got mingers who cant defend booooo ,we need more grit….. oups ; )