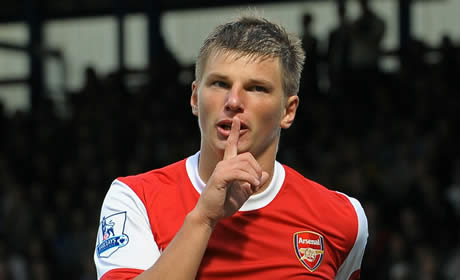 Speaking to Sport Express, Arshavin said, “The season will be very difficult. I think that just six teams will challenge for the top spot.

“Another thing is that I would have divided them. The first three,  Man United, Manchester City and Chelsea,  the second – ourselves, Tottenham and Liverpool.”

And following on from Marouane Chamakh’s claims yesterday over the futures of Samir Nasri and Cesc Fabregas, Arshavin says the ongoing sagas make an assessment of the Gunners chances difficult.

“The policy of our club is the same, but to say anything specific is difficult, not least from the fact that two leading players, Cesc and Samir, have not decided their future.

“The loss of any either one of them is enormous, and we naturally want to see Cesc and Samir play with us in the future”.

The Russian, welcomed the signing of Alex Oxlade-Chamberlain and hoped for further additions to the squad. He also dismissed any talk of a move to mega-wealthy FC Anzhi – who are rumoured to be signing Samuel Eto’o and paying him €20m a season – suggesting rumours were the work of ‘fantasy writers on the internet’.

“The situation is completely virtual. The main thing is to win any title with Arsenal”.

That last quote really does look like it should have “Simples” at the end. . . .

Good to know any title will do. Roll on the Emirates Cup. Oh. Damn it!

At least he is being realistic. It’s going to be another tough season but if we do sort this bloody defense out there’s no reason why we can’t be in the top 3 at least

Arshavin down the middle as a backup for RVP maybe?

Nah. Have you not seen the girth on the fella? If he ain’t a ‘wide man’ I don’t know who is.

I take it you’ve seen arsharvin’s girth then

‘fantasy writers on the internet’ hahaha you gotta love arshavin

perrygrovesworld
Reply to  The Cabbie

Hope you dropped him off a fucking cliff……..

Listen guys come on Spurs are skint as fuck so they are working some 5 fingered discounts to buy a load of ex Arsenal player Lassana Diarrhoea and Manu “National Express” Adeybywhore.

Its not rioting guys its a Tottenham fund raisers 🙂

PS Nasri is a Cunt

Apparently they just splurged a load on their new Italian striker, Grabatelli. Don’t know much about him, but it’s probably a safe bet he’s a c***.

I notice nobody looted the club shop. Imagine the next day all your mates have got new tellys and ipads & all you got was a sp*rs shirt & a signed photo of Michael Dawson…

Ha. They did actually break into the ticket office though, didn’t they? Guess they gave up on looting it when somebody pointed out there would be no buyers or resale value..

I am sure with one good signing in defense we will challenge ,we already have 2 good signings in Gervinho & Miyaichi plus 2 more for the future

I think he’s being a bit generous picking us, spurs and city as challengers. Don’t get ne wrong I hope we are but I doubt it. I can see utd

I think he’s being a bit generous picking us, spurs and city as challengers. Don’t get ne wrong I hope we are but I doubt it. I can see utd shit winning it again, Liverpool second and Chelsea third. City 4th us 5th and sp*rs burning. City’s defence is as suspect as ours and all the strikers in the world won’t stop them conceding.

One more day till I’m rid of this iPhone….

Does that mean you got inside info on where the next looting spree’s gonna go down?

His wife’s hot.
I have nothing further to contribute.

Your wife is hot.
I have nothing further to contribute.

My wifes hot and she love to contribute

Your mum’s hot and all she does is contribute.

“These are just rumours,” Arshavin told Sport Express. “I’ve always said that I’m playing where I want – in a top European club.

On a totally unrelated topic, has anyone watched Dortmund play? Wasn’t that Arsenal 3 or so seasons ago? Whatever happen to our sleek, one touch passing? Would their coach be interested?

Hopefully the little Russian is in much better shape this season than he was last. On his day he has the ability to change a game, but sadly we’ve not seen too much of that since he joined the club.

He has looked more like the player he did at Zenit during pre season so fingers crossed that bodes well, he could possibly turn out to be a very important player for the Arsenal this season.

I like him. He seems a little odd but his interviews are always articulate. I’m hoping the removal of Cesc will help him flourish in the side as a go-to guy. Play him in the middle with Gersixhead and Theo out wide. Let others take some responsibility to create. I’d be happy with Arshavin, Wilshere, Gervinho, Walcott and RVP adding an attacking thrust.

Ryo gets his work permit, Nasri wants out and a few other things. « savagegooner

[…] behind him and get his development back on track. Andrei Arshavin is another one who’s been using the old jaw muscles to talk about a few things including the season ahead, speculation about his future and the signing […]

Guys is it me or does Gervinho look like lieutenant worf ?

Sell Nasri and buy Mata. Is that still a possibility?

What would you do if you were city? stretch this into a mini cesc saga right to the deathc of the transfer window, and offer £10m

Now everyone knows he wants out and def won’t sign a new deal, theres no market for him. i would be shoked if we got 20m for him now. i think that would only be possible if other teams came in with bids. maybe inter after the sneider deal concludes? 32m for wesley, 20 for cesc? not bad business. not great, but not bad.

2om for nasri i meant.

Your mum’s so hot that millions of guys across the country saved themselves over the weekend for her but she didn’t show up. Then all this rioting shit happens…. Your mum is H-O-T

Fuck me have i just stumbled onto bebo?

So are own players don’t give is a chance. Brilliant. That installs confidence in all of is. Might aswell have kept his mouth shut the lazy Russian prick

Disappointing drop in the ANS, LANS or even ALANS quota today.

I’ll settle for saying Scholes is a cunt in that case.

1844: FOOTBALL – BBC Sport understands that Cesc Fabregas is on the verge of leaving Arsenal for Barcelona. The move is yet to be formally completed but Arsenal expect the deal to be done by the weekend. BBC sports news correspondent Dan Roan has been told by senior sources that all the funds generated by the sale will be reinvested in new players All that was left was shallow denial. Now its gone. Cesc is gone. The only final humiliation will be the price. Who will be his replacement? One thing is for sure Wenger has his man lined up.… Read more »

If its Joey Barton i’m gonna fucking kill myself

if its Joey Barton i’m going to kill Joey Barton, then wenger, then nasri, then John Terrys kids, before finally turning the gun on myself.

if cesc and nasri go, Arsene HAS to respond with big signings, and immediately. he is the one who said selling both those players would mean Arsenal are no longer a ‘big team’.
a CB for sure but who else? Mata? or a Wenger special surprise signing with ‘super quality’? it won’t be Sneijder as his wages are ridiculous.

Wesley Spider is a united player now for sure. mata is a like for like replacement for nasri. i just can’t get my head around city paying 20m though if theres no other bids. cesc replacement is a biggy. It will be a suprise for sure. it will need to be top quality and ready to go, not ‘exciting prospect’. and we still need a CB. If nasri goes as well is wenger really going to bring in three players? Or maybe two ‘mega’ signings. Top class CB that we’ve missed since Sols decline. And top class CMD? probably joey… Read more »

1915: FOOTBALL – Speaking about the potential transfer of Cesc Fabregas from Arsenal to Barcelona, BBC Radio 5 live senior football reporter Ian Dennis tells 5 live Sport: “Arsenal are not confirming the reports coming out of Spain but it should be done within the next 48 hours.

hold the press: there is still some shallow denial left in there yet……reports coming out of spain??!!

1. He never trained with any of our players. Ever.
2. We only ever play him against those stud-showing, ankle-smashing, knuckle-dragging, hoofing buckets of monkey spunk, Stoke, armed with a ten pack of Hamlet’s stuffed down his sock.

3. when not playing stoke he was kept in a box in the basement under the stadium and poked with a stick with a nail in the end.

and he was on a pay as you play deal.

Champion I’ll call Ivan you tweet joey the contract. Tweeting seems to be the3 only medium of comumication Joey uses these days. Maybe its something to do with the 150 character limit…

why is there a picture of harry rednapp at the top of the page?

now its a bee on a surfboard WTF?

Chamakh and Arshavin’s comments may all but seal the squads outlook on the summer sagas. Bring in Mata, cash in on Nasricunt, exploit Barca by stealin more youth in Cesc deal, and add a couple defenders. AFC will be fine.