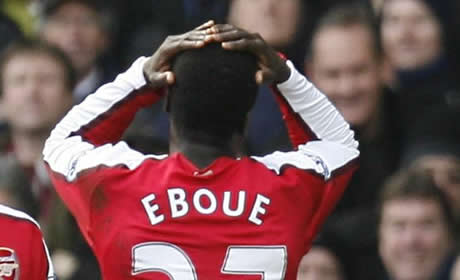 Turkish side Galatasaray have confirmed via their official website that they’re in negotiations with Emmanuel Eboue over a possible transfer to the club.

That they’re speaking to the player suggests an agreement has been made between the two clubs. The Ivorian, who only signed a new Arsenal contract in late 2010, has been available for transfer this summer – with suspicions Wenger’s patience ran out after that calamitous penalty incident against Liverpool last season.

When youngster Carl Jenkinson was the prefered understudy to Bacary Sagna in pre-season, and Gervinho took his squad number, the writing was very much on the wall for his Arsenal career.

Eboue joined Arsenal in 2004 from Beveren and has made a total of 214 appearances for the club, scoring 10 goals.

Hurry up and buy him then!

Cult hero, top bloke and all, but I’ll be glad to wish him all the best.

Bet the Fenerbache darts team are shitting it.

A diver and a cheat and a fucking liabilty for too long, good riddance.

Savage is a Dave
Reply to  Charlie boy

That penalty he conceded against Liverpool was the straw that broke Gunnersaurus’s back tbf.

But with cesc gone, how can we afford to sell the pass master?

I thought his goal celebrations were always more skillful than anything he did when the ball was in play.

Each and every one of those 10 goals was deeply, deeply savoured.

Im sure there’s a tear in everyone’s eyes today over a true arsenal legend, I can’t believe he never made captain….

We apparently offered him the job but he turned it down, disgusted that the long held Arsenal tradition of the skipper choosing the match day shirts was limited to short or long sleeves.

Had we bowed to his demands of red satin hooded shirts with a fighting dragon and polar bear motif, our history could’ve been very different….

Eboue, was both a legend and a liability at the same time!
Believe me, thats no easy feat.
Everybody seems to forget he was part of the team thta beat Barca at the Emirates last season, but everyone remembers that liverpool incident, like we would have won the league if it wasnt for that 1 error!lol

You will be missed more so than Nasri!

He fucked up a few times but his heart was always with the arsenal. Good luck and thankyou.

I shall miss the arscast eboue more than the real eboue

footballing wise i cant say we’ll miss him, but a great player to have in the dressing room, and a player who loved arsenal. good luck eboue!

I can just picture him standing on the touchline pre-match in Istanbul, saying his prayers and getting a bottle on the back of the head.

thank fuck for that

[…] Arsenal have confirmed that they have agreed terms with Galatasaray over the sale of Emmanuel Eboue. The Turkish giants announced it on their official site yesterday. […]