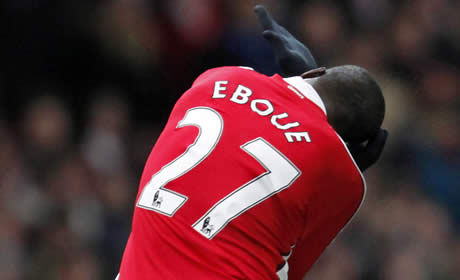 Arsenal have released their squad numbers for 2011-12 and there’s no place for Emmanuel Eboue.

His number 27 has gone to his Ivory Coast colleague Gervinho, which will fuel speculation about Eboue’s future at the club. However, both Manuel Almunia and Nicklas Bendtner are listed despite being close to moves away. Not to mention Cesc Fabregas still listed as Arsenal’s number 4.

Perhaps it’s a case that re-issuing him another number is pointless if he’s on the way out. Another notable absence from the first team squad list is Henri Lansbury who would have hoped to be part of the first team plans this season.

New boy Alex Oxlade-Chamberlain will wear 15, Ryo Miyaichi 31 while Wojciech Szczesny’s decision to move to the number 13 is also confirmed.

The full squad list can be found on Arsenal.com

Suprized Gervinho didnt go for the number 9 shirt. Maybe he’s saving it for someone? or am i just being overly optimistic.

27 is his #. Wore it at Lille. That’s why he’s been wearing 22 all pre-season. He’s been waiting for Eboue to leave. Arsenal let’s first XI choose their shirt #, so if no-one wants the 9 shirt it will be left vacant. Same reason Chamakh doesn’t wear it.

Doesn’t Heskey wear No. 9 at villa?? Hmmm what are u upto Wenger 🙂 nasri out Heskey boom

That’s what I was thinking.

Am i missing something or do we not have a second choice right-back in that squad? Serious lack of depth in the listed players!

Jenkinson is second choice right back

Sorry, just seen Jenkinson there, forgot about him!

In all seriousness, I’m completely indifferent about Eboue leaving.

Eboue is getting a picture of an crocodile wrestling a gazelle into a watering hole on the back of his. He is beyond numbers.

No, he’s getting a picture of a big green dinosaur in an Arsenal shirt.

No squad number for Eboue?

Wenger: “Losing Eboue is just like having a new signing!”

Great news. Clear out the dross.

Wenger: “Losing Eboue is just like having a new signing!”

Only 28 first teamers. Injuries, same old same old. And If Wenger buys £60m worth of players, I’ll eat my house.

Unlimited U21’s can be included. How many U21’s are in that list? I make it 10 or 11.
Actually they’ve taken the list down – probably to omit Fabregas

This is not the Premier League squad list, merely a list of first team squad numbers, so it will need to be pruned further as there were 29 names on it before it “disappeared”.

Maybe we can have the new centre-back signing wear 9, just like Gallas wore 10 and that…………oh

In other news, the club made another signing…. anew beer provider:
http://www.arsenal.com/news/news-archive/carlsberg-is-arsenal-s-official-beer-partner
Love to know people’s thoughts! Its all a bit liverpooly for me

Carlsberg is in all probability not the best beer in the world, but a step up from Carling and that making-love-in-a-canoe one over the pond. Besides, it’s a great company, love the way it’s run.

They better not serve that 3.8% piss.

Was hoping for a better beer, but at least Carlsberg will be able to provide better service, more stands, more bottles etc.

What ales to Carlsberg distribute?

Why say he is not in the squad lists?

Sorry my bad did not check the list correctly, but anyway, he is not in squad due, as Arsenal.com puts it:

Henri Lansbury was under the age of 21 on January 1, 2010 and therefore it was not necessary to name him in Arsenal’s official Premier League squad.

And fack, upon further inspection the list was dated at 2010! The link to the latest one can’t be found my bad I am so sorry! Damnit that means Lansbury is really not included?

cornishlee
Reply to  Why Fabregas?

Tallies with the fact that he was left out of our CL squad as well. Sadly, it seems he might be on the way out. A lot of fans wanted to see him given a chance, but I guess in fairness there aren’t any youth players who’ve come back to haunt Wenger yet – even after 15 years at The Arsenal.

Is Almunia close to a move? I’ll believe it when I see it. Where is he supposed to move to? Get rid of the dross and sell Diaby to the knacker.

Hopefully to update Almunia’s to P45

Would bring a tear to your glass eye.

Sad to see him go really.

only eboue would do that. nail the bull and outer bull first two darts.

that was hilarious. Still my favourite clip is of him listening to the korean coach talking to one of his own players and noddin gas if he can understand.

Now even our darts team will be fucked.

Anyone know if Phil “The Power” Taylor can play CB?

The true test, we will finally find out exactly who only came to see Eboue

Really would you give up 4million of your money to play for them ????

if i personally had 4 million yes. yes i think i would give it to barca so i could sign my 4 year 100k/week contract 🙂

Mr Rectum,
I salute your mercenaryness !!!

my mums a lesbian and she says if nasri was in fact a lesbian he’d be one of the prettiest. most lesbians look like Al – tim the toolman taylors assistant on ‘Home Improvement’

Not one of our better players we’ve had at Arsenal – certainly not as good as Lauren was, but his loyalty to the club and willingness to sit on the bench every season is an admirable trait i wish more players carried.

“willingness to sit on the bench” is an admirabe trait? I can only assume your comment is meant to be sarcastic.

My apologies – i meant his willingness to stay at the club despite being sat on the bench every year. THAT is the admirable part. Some of the Arsenal players start week in, week out on the pitch and still want to leave!

I will say this, the only person that I respect out of those that leaving is Emmanuel Eboue. This man is class. Show much love and loyalty for the club even when the fans publicly disgrace him and curse him and his family for every little mistake he made. He never complained but instead showed his appreciation for the very same people that booed him my working hard for the team. Show leadership quality from the sidelines by supporting his mates when most players would be complaining of not being played. If you do go Eboue, I will miss u… Read more »

i have just as much respect for cesc, and less for nasri which may be unfair looking strictly at the facts BUT

wouldn’t it be funny if after cesc, nasri, eboue and bender go, we unveil a giant banner saying ‘Goodbye Eboue, we love you, good luck’ which of course completely ignores the other departures? I just think that would be really hilarious.

I would love that…. I hope someone is thinking about doing that if he do go

I think I must have seen a different Eboue. The one I saw was blessed with pace and power as well as skill and technique. It was his attitude that frustrated me. I agree he did well the season after “The Incident(c)”, he also did well when first replacing Lauren. But in between and since he has been content to rest on his laurels – the contrast between him and his far less talented countryman, Kolo Toure, and the determined Sagna, who took his place, is one marked by workrate and application against theatrics and chumminess.

Amen my friend. I’ll be gutted to see him go and I really do feel sorry for him. Almost feels like kicking a puppy…

Wherever he goes I hope to see him come back and play us. The reception for him will be something else and he won’t be able to resist a lap of honour.

The other surprise, apart from Lansbury’s omission, is that Frimpong has been given #26. That would suggest that he’s going to be considered as a full part of the first team squad this season.

Eboue is taking No9!

Twenty nine names on that list. Take out Cesc, Nasri, Bendtner and Almunia. That leaves 25, or EPL squad limit. There are 11 under-21s in the squad who don’t have to be counted, so that takes it down to 14. But of our required eight “home grown” players as many as five will have to come from the under-21s. Back up to 19. So six spaces for new signings, five if Eboue was accidentally forgotten on purpose. And still even room for a new CB if all the wanna-aways stay.

I beat the Arseblog and all other Media houses to it (except the Officia Site) ==Joel Campbell signed for Arsenal!!

I really hope Lansbury stays and makes the breakthrough.

So why is Almunia still at the club? Can’t believe that after being left out of pre-season, the guy is still there? Is it blind loyalty or his pay cheque has become a hindrance for him to leave?

Honestly people do you really believe Jenkinson is up to the job?? I for one very much doubt this, never mind his antics I believe Eboue should stay he wud be wonderful cover for Sagna and when it comes to wing play he does it way better than Walcott!!! I kno i kno you are sharpening yo pencils, but here me out….name one play in the club who can cross the ball better than Eboue??

[…] you missed it yesterday the Arseblog 2011-12 season preview. As well as that, the squad numbers were announced yesterday, Gervinho takes Eboue’s 27, and Eboue is not listed in the squad at […]