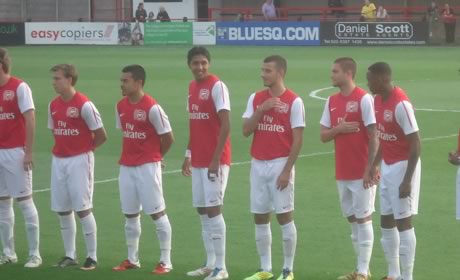 The first-team’s pre-season plans may have been disrupted somewhat by persistent transfer speculation regarding key players but, as far as Arsenal Reserves are concerned, things have gone comparatively swimmingly with Neil Banfield’s side triumphing in all five of their major pre-season games and now fully prepared for Monday’s big kick-off against Manchester United at Underhill.

As with most close seasons, there has been something of a clear-out with regards to the reserve and youth set-up, with Mark Randall, Thomas Cruise, Roarie Deacon and Jamie Edge released and Jay Emmanuel-Thomas sold to Ipswich Town. Their respective departures have enabled Banfield and Steve Bould, the under-18’s coach, to push through an exciting new batch of talents who will be seeking to make their mark this campaign.

One player who falls into that category is Serge Gnabry. The 16 year old German youth international only officially completed his move to the club at the start of July but has already played, and impressed, for Banfield’s second-string in pre-season, scoring with a bullet header in the emphatic demolition of Boreham Wood before another substitute appearance against Dover Athletic.

Gnabry is part of a prodigious group of new scholars that also includes Barcelona recruits Hector Bellerin and Jon Toral, showing that Arsenal’s scouting system with regards to young players, despite the odd anomaly such as Edge, remains in good shape and those foreign recruits, in addition to home grown talents such as Chuks Aneke, ensure that the club maintains a healthy mix of domestically-based as well as imported potential.

Aneke, meanwhile, who featured prominently for the Reserves last campaign, is becoming increasingly reminiscent of Emmanuel-Thomas at that level, often appearing too good at times, and is in need of  a loan spell which may help dictate whether he has the determination and application that Emmanuel-Thomas seemingly lacked and which is a requirement if a breakthrough to the first-team is to be made.

Aneke is in line to start against United in what will be a highly-anticipated fixture at Underhill, the first time that the two sides have met at this level in North London for a decade. The team that lines up against the Red Devils, which is also likely to include Luke Freeman and Sanchez Watt, is likely to be much different from the one that ends the campaign away to Newcastle United in April, with many players expected to leave the club to embark on various loan spells in the ensuing period.

With the loan transfer window open until late September, there is still plenty of time for Aneke and company to join the likes of Kyle Bartley, James Shea, Pedro Botelho, Samuel Galindo and Wellington, who have already left the club on loan. The United game, though, should provide an entertaining send off for those who are poised, albeit temporarily, to depart and is likely to be a closely-fought affair, with the two sides drawing 0-0 on the final day of last season.

Results are not the be all and end all at reserve level, with player development taking precedence, but any victory over United deserves recognition and, with plenty of undercover scouts expected to be in attendance, the door to competitive football, via the medium of a loan spell, may just open for some individuals should they suitably impress.

Really excited about going to Underhill on Monday to see the reserves, shame we don’t have all home games there any more but at least we get to see us square up to United’s second string. Seeing the possible future of the club for nowt & having the Bee’s famous slope thrown in for good measure can’t be bad can it!

Informative and interesting but gosh this was hard to read. The odd full stop wouldn’t go astray.

Blimey, the last paragraph is one sentence!

Great start to your Arseblog residancy btw the way Jorge! Do you get access to the behind closed doors games at London Colney once we’re done at Underhill?

Gotta love Jeorge’s long sentences!!! Welcome to Arseblog!!!!! what a force this is becoming

“showing that Arsenal’s scouting system with regards to young players, despite the odd anomaly such as Edge, remains in good shape”

Sorry, but what happened to Jamie Edge? All I know was that he was released form the club. Was there some sort of incident?

His attitude was good, but he was below the technical level expected by Arsenal.

There is however a deficit of cool last names since cruise and edge’s departure.

this should be addressed quickly.

Bit of a basic question – I’ve never been to a reserve game before but I’m gonna head down there on Monday. How much is it to get in?

Well written. Well done and welcome to the team!