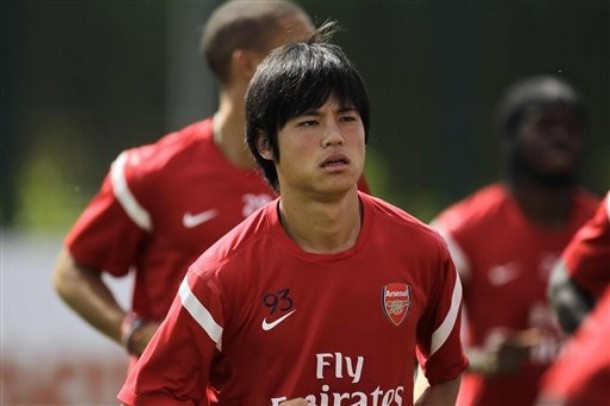 Arseblog News has been very wary about jumping on the Ryo Miyaichi bandwagon since the Japanese winger signed for the Gunners back in January.

Alas, with the 18-year-old now promoted to first team status after securing a work permit, and with other squad members leaving in their droves, there seems little left to do but to make a sacrificial offering to the goddess Nike (she of strength, speed, victory and cheap looking replica kits) in the hope that the special talent she has delivered unto Arsene helps secure us many titles.

While it remains to be seen what Ryo (or 宮市 亮 to his friends) will make of thousands of Gooners winching Cheryl Cole on to the top of a giant bonfire, he thus far seems humbled by the opportunity afforded to him at the Emirates.

Speaking to Arsenal Player, the Chūkyōdai Chūkyō High School protégé (rolls off the tongue better than La Masia no?) spoke about signing a contract in England.

“I felt this was the start. Of course I was very happy, but then I soon switched my mode to a serious one and I made myself determined to do it.

“I was thrilled but at the same time I started to feel responsibility. Signing my contract was my first step as a professional and now I’m determined to go to the top.

“Since I decided to become a footballer I have dreamed of playing for a team abroad. I am pleased but have just started and I have done nothing yet. I should keep my feet on the ground and work hard.

“Arsenal is a club loved by people around the world so I am proud to be a part of this team.”

Arsenal fans are no doubt aware that after signing for the Gunners Miyaichi was immediately sent to Holland where he spent four successful months on loan with Feyenoord.  What many won’t know is that four years earlier the Japanese starlet had undertaken a trial in the same Dutch surroundings.

“I joined their training for two weeks when I was just 14-years-old, so when I was loaned out to Feyenoord I did feel some kind of connection. This time I went there as a player so I felt that I had a greater duty to achieve results.

“It was my first year as a professional and even though it was only a half season it was a great experience. I was lucky to be there and to play and I was surrounded by both nice fans and staff. I’m very grateful to all of them.”

The supporters at De Kuip, obviously as desperate for a shining light as those at the Emirates, even decided to label the loanee ‘Ryodinho’ presumably because of the youngster’s trickery on the ball rather than his penchant for Brazilian dentistry.

“I believe they compare me to Ronaldinho, but I can’t hold a candle to him,” confirms Miyaichi. “There needs to be a lot of hard work in order for me to catch up with and overtake him.”

Hmm. We better start the fire. Who knows where Cheryl lives?

Is he able to play Saturday? The way its going I might take my boots over, u never know 🙂

Good kid. Hope he’s a massive success. In a our (current ) squad he should get some games.

I am conifident he will do a shit in Nasri’s dead mouth. (Metaphorically speaking of course)

Metaphor or not, I’d pay to watch that.

but your comment takes the cake, and I hope it comes true

I was speaking to a Feyenoord supporter the other day, and apparently the kid is very good (getting nicknamed after Ronaldinho after under 15 games). He adapted to the team in no time which is good to know given he’s probably going to repeat that feat at Arse.

Hope he stays away from Bendtner’s boots, my sister wouldn’t wear them

looks an exciting player. From what I saw of his time in holland (limited mind) he looks very developed considering his age.

He seems to have a hard work ethic and good attitude. Impressed by his performances whilst on loan considering he only played school level football before that!

lets not forget wengers time in japan, and grasp of the language. i’m sure he’ll look after the kid.

Don’t want to get too excited and expect to much from him, but it’s quite hard not to at the moment. The amount of hype the club seem to be surrounding him with is quite bizarre. Just hope he can handle it. I’m trying not to make judgements on us this season as I’ve no idea what to expect, but then, probably none of the other teams we’ll be playing will either, which might work in our favour.

Oh, and slow news day eh? (Not that I have anything against Ryo, or Arseblog of course)

I thought he was disappointed because he came to arsenal to see Eboue.

If wenger signs a letter it would make news and get me excited at the moment let alone a player.. Some hope

Jack Wilshere was there
and he can do no wrong
R-V-P
and Alexander Song!

NB
Reply to  Stepanovs is my Dad...

Wish you’d given your son the same advice, DoS.

I much prefer that terrible ‘Iraq’ song for Cha(rain)makh.

NB
Reply to  Stepanovs is my Dad...

My word that is rubbish, sorry

I quite liked it, especially when sung jumping around pretending to be Bruce Lee.

Shame I broke my bed, though.

It was gonna get broken one way or the other. Probably best while you’re having fun.

“I felt this was the start. Of course I was very happy, but then I soon switched my mode to a serious one and I made myself determined to do it.”

Are you trying out some lame material on here before venturing on a career in piss poor comedy sitcom writing dude?

Stepanovs is my Dad...
Reply to  Sid

Come on love…. get back in the kitchen.

I think you’ve come to the wrong site pal

did you ever see that woman off’ve britains got talent – the comedian? ‘garlic bread…..’

I liked this kid in ‘Angry Boys’.

I’m not sure what Kung Fu fighting has got to do with Ryo Miyaichi. Kung Fu is an ancient Chinese Martial art, and Ryo Miyaichi is from Japan. England is so much closer to France than China is to Japan, that the equivalent of singing Ku Fu fighting for a Japanese player is like singing Football’s Coming Home for Zinedine Zidane.

Away from the shores of England, I hear there are other countries out there that are quite different from one another. Please confirm.

Just to clarify for the ignorant/uneducated/racists out there:
Kung Fu is Chinese
Karate is Japanese

See explanation below. Your sensitivities have been noted. Thanks.

Do you want KARATE?

Come back with a proper sentence and I’ll answer it.

Bring Back Brady
Reply to  Vindicator

That’s the point, and that what makes it funnier. The fact that it’s a football chant automatically implies that it is written and sung by people who are culturally ignorant. I live in Japan, so don’t worry, I do know the difference. Well done for picking up on the joke though, even though you didn’t quite get it.

Can’t agree that makes it funnier, or funny. Sorry.

I saw your effort below. We certainly don’t share the same sense of humour.

didn’t say mine was funny. or good. in fact i already said it was shit. so there you go.

Well that’s settled then. Ladies and gentlemen, we have a winner!

at least mine was topical…

Better would be to the tune of that shit hymn “Water water of life…”
Ryo Miyaichi
much better than Gael Clichy.

It seems that with all these yoof team players headliners, hoping they will be the next this or that, the club are building us up to something. Yes, call me cynical.

Wenger wil; say, he is very technical and can be compared with Henry, just the same for WALCOTT, but have we really seen anything like that yet, LANS.

Surely the chant will be to the tune of:
Ryo, Ryyyo, daylight comes and we want some more goals!! Ryo Ryyyo!! etc…

nasri is a c*nt

Oh Wenger, oh Wenger, Wish you were a big spender,  Just sold Fabregas, Now time for Nasri & Bendtner. Clichy gone and Eboue too, Time to go out and buy someone new. Defence is our weakness so that’s where I’ll start, Unfortunately not solved by Alex Oxencart… There’s Samba or Cahill,  Or possibly Dann, Even Jagielka if you don’t mind the older man. Further up there’s Jadson and Hazard as well, Whatever happens, do it soon! They need time to gel! No Mata?, no matter, Just find someone good, Who’ll help us win trophies the way Arsenal should. So do us… Read more »

Or something to the tune of “Rio” by Duran Duran.
Any ideas?

well this has gotten a bit petty hasnt it lads…

It’s just a joke. Come on. Surely you can see the funny side of it?

yes. agreed avidgooner. Sorry. I’m getting close to the arm waiving and shrieking point about the transfer market and being a grump today. Meh.

Stepanovs is my Dad...
Reply to  rains

His name is Ryo and he’s come here from Japaaaaan….

leeroy
Reply to  Stepanovs is my Dad...

I Go to Rio by Peter Allen?

Paul scholes is a cunt

His name is Ryo and he gives Terry a back hand,
And that other cunt from Man U I can’t stand,
And when he hits he really shows you all he can,
Oh Ryo, Ryo… Nasri is a cunt…

Need to work on the last bit..

Stepanovs is my Dad...
Reply to  Ghostofgoonerspast.

The sentiment works for me.

my son who’s 12 has just written a song called “Oh Ryo!” whose chorus lends itself rather nicely as a perfect terrace anthem to our new star

find it here: http://www.cdbaby.com/cd/fir2 or on itunes

let us know what you reckon

Is Rosciky injured too? Then he or Ox will defo get a start at the Pool game.

Ryo Ryo score your goal,
show the team your goal
……..
to the tune of row row row your boat

Oh Ryo, Ryooo (like the chant in Wizard of Oz)

He came from the east.

Am liking the Nasri/Miyaichi rhyme potential though, definitely.

Won’t somebody tell me where Ryo has gone,
He’s my japanese boy…

What about something similar to either Nasri’s or Chamakh’s chant? Both were catchy, and one is leaving and one has loss form for the time being.

Is there a trophy to keep a minimal squad size, which Arsene is aiming for?

or a new CB and vermalen as LB

A bit of topic but got one for our trip to Man Ure next week. To the tune of Vierra’s song.

BTW it is pronounced ME YA EE CHI, not Mi-yachi, also Ryou doesn’t = Rio!

Good luck to the lad

I have heard he has barcelona DNA and also has signed a pre contract with a bunch of northern cunts.

Ps Nasri is a cunt

everytime he getsa the ball we could just shout

wow i sound italian there.

To the tune of tubthumping by chumbawuma,..

Ryyyyyyyyooooo, Plays as good as Sam Nasri
Ryyyyyyyoooooo, We are spending less than Mancini