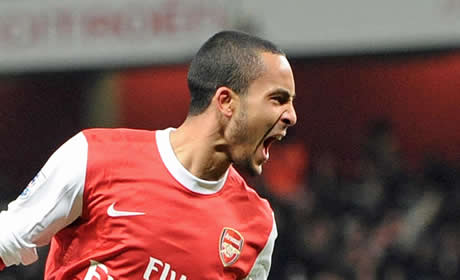 Theo Walcott has outlined an incident in which he was scared by an alarm clock and an Italian.

The Sun is serialising Theo’s new book, entitled ‘ Growing up Fast’ and he recounts an incident in which he missed a meeting and which frightened him more than that time he went to see Scream 4.

I’d thought the meeting was at 7.30pm but it turned out it had been half an hour earlier. I’d had an afternoon nap, set my alarm too late and slept through the meeting. I could feel my heart thumping. I had never missed a team meeting before. I was in trouble.

It was the Monday evening before England’s friendly against Holland in Amsterdam in August 2009. I got downstairs as fast as I could and spoke to one of the coaches. He said I should go and apologise to Mr Capello. The coach said he had gone back to his hotel room.

I stood in front of his door for a few seconds, my heart thumping. I knocked and there was a brief wait that seemed like a lifetime. Then Mr Capello opened the door. He stood there, looking at me.

“Boss,” I said, “I’m so sorry I missed the meeting. I misread the time.” Mr Capello’s expression stayed the same.

He shrugged his shoulders, then let the door swing shut in my face. He hadn’t said a word.

“Oh, f*** me,” I thought. It was much worse than getting a severe bollocking. It was seriously scary.

I think all of us can understand the trauma of waking up late from an afternoon nap in a luxury hotel. The fear is simply indescribable, so credit to Theo for managing to find the words.

Jack Wilshere would have had the meeting convened around his nap…

And then made Capello learn English just so that he could apologise to Jack for being inconsiderate. Jack Wilshere is like Chuck Norris but better. He’s A Gooner.

some of us still haven’t

do you know what Bloggs – you’ve a lot to answer for printing a story like that in this climate. you’re twisting the knife.

Did you also know that Theo has a fear of flying? He mentions it in this interview: http://t.co/H4oxr9T

Blogs can i work for you? lol. This is hilarious.

Im glad we dont think he lives in luxury.

In my mind the backround musIc to thIs scene is from Halloween, and a loud creaking door. The mans a clear psychopath.

A little light relief is no harm

is that another quote from theo’s book?!

i hope theres no pictures….

He’s not like Merson, who spent most of his book talking about wanking.

Except he called it ‘waxing the dolphin’. And dolphins are complete cunts.

That’s the reason he’s so fast, he’s fucking scared of everything!

I know 22 is young to start releasing books, but there really isn’t much else to do when you are injured so often. Just ask Diaby, I hear he wrote the whole of Wikipedia

He left the Eastern European architecture and literature entries to Rosicky?

When he slammed that door in Theo.’s face, if that was me, I’d have gone back crying to Arsene and let him sort him out!! Failing that, I’d have asked MR Baton (Joey Barton) for hired hand; who would’ve prob beat seven bells of shit out of him and then pretended he was the victim!! lol

The crazy things kids get up to these days!

I love Theo, but I do think he should stick to the football until his prose improves. Of course, The Sun may have dropped the level of it a bit, and news-style paragraphs are no help.