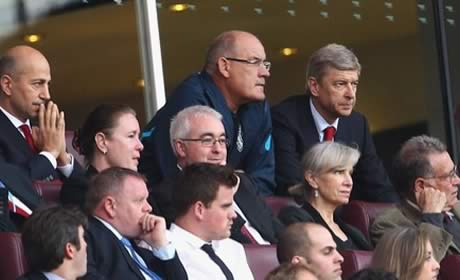 UEFA have just announced that they have open disciplinary proceedings against Arsene Wenger. In a statement released on their website, they say:

“Disciplinary proceedings have been opened against Arsenal FC manager Arsène Wenger for not abiding by the decisions of the UEFA Control and Disciplinary Body in relation to the one-match suspension he served during Tuesday’s UEFA Champions League play-off game against Udinese Calcio.

According to the UEFA Disciplinary Regulations, a manager may not communicate with his team during the match for which he is suspended and may follow the game from the stands only.

Wenger was serving the suspension which the UEFA Control and Disciplinary Body handed down following the English team’s round of 16 match at FC Barcelona in the same competition last season.”

Yesterday, Wenger hit out at UEFA for their lack of clarity, saying, “It was difficult because you didn’t really know what the rules were.

“They told us first we could communicate through my assistant and at half-time it was not like that. It was a bit confusing. We tried to respect the rules as they are set by UEFA but, of course, it is very difficult to see how you can stop someone having an influence”.

UEFA will discuss Wenger’s case on Monday, August 22nd, and have, no doubt, sent a nice hamper to Geoff Shreeves and the rest of the sniveling fuckwits at Sky who seemed to focus more on who Wenger was talking to than Arsenal’s match during their coverage.

The Red and White Observer

Sky really do not like Arsenal and Arsene
I wonder how may bans Jose will receive.

I lived in France for ages but never knew that. .

He clearly watched the game from the stands. Job done. Whats next he’s got to sit in solitary for 2 hours? Uefa say its like a player getting sent off, well a player who is banned for a game still rides the team bus, still sits behind the dugout and still has influence within the team. my god they probably even encourage their colleagues. So mr wenger is banned from managing. how the hell do you not do that. tell pat rice to put all the names in a hat and see what the first 11 is. Tactics? nah we’ll… Read more »

The reason the English media give Arsene such a hard time is because he doesn’t pander to them like twitchy does who must have repetitive strain injury from the amount of times he winds down his windows to speak to the sky reporters outside their training ground,the truth is they arent fit to lick his boots..Cunts

I doubt any further action would have seen the light of day were it not for the incessant bullying the UK media seem to subject Wenger to. You’d think they’d have it in them to be a bit subjective, look at RvP’s red card that sparked this whole debacle and realise that on balance, no further action is required.

[…] other news, Arsene Wenger is in more trouble with UEFA after using a combination of pigeons, Boro Primorac, and text messages to relay information to Pat […]

look back at what started this all, an absolute Joke of a decision. that’s led RvP Narsi and Wenger to be banned for a game. Is it just us that are hit this hard? Most of the time it doesn’t fell like teams are treated fairly.

The whole world is against us, and the fans are doing no help with turning against the and the team and the manager.

if we get a draw we prob wont boycott it..

What a pack of utter fucking cunt bags!

UEFA just as inept as FIFA and now that are compounding the original error which gave Barca the tie, as if that was not bad enough

How long does it actually take for UEFA to come to a decision on this? Either they let him off, or they say: “sorry, banned for the next one too”.

It’s probably another excuse for UEFA officials to spend a load of money on themselves while they deliberate on this oh-so-difficult matter. Well why they are at it, why don’t they have a good think about how Man City have blatantly flouted the Financial Fair Play rules with their ridiculously large stadium sponsorship. Heck, you could build a stadium for the amount Etihad are ponying up just for naming rights.

Sky are such cunts, and remember, they used to have a 10% stake in Man Ure. How was that not conflict of interest?

That’s why I have cable tv rather than satellite, and I will NEVER subscribe to Sky Sports. Unfortunately since Setanta went down the shitter, I have to put up with Sky Sports News and their shitty, anti-Arsenal coverage. Grrrrrr…..

Absolutely fucking incredible. As if we didn’t already know there’s some sort of conspiracy against Arsenal, this confirms it. Amazing how we’re always the first to be punished for something others have been doing for years: Eduardo’s supposed dive (even though it was rescinded, they still did it initially), and now this. And, of course, all the sympathy given to Taylor and Lennie for breaking our players legs. We’ve always been hated but it’s got to a ridiculous level now.

This wouldn’t have been an issue if Sky didn’t instigate the whole thing. Instead of covering the game they we were commenting on what Arsene was doing. Proof of a media conspiracy against Arsenal, IMO.

We should seriously ban that little pug faced cunt shreeves from the Grove now,I’ve never seen anyone trying to justify their job more in my life,what a crawly little cunt.

But Wenger is wrong.
Go die Platini, that is all.

We have to give more backhanders like all the other big clubs do.

The FA didn’t mind alex ferguson having a ruddy great big White telephone which he used himselve to relay tactics during his 5 match ban. Why do uefa have to nobs about it

Fuck them all! Cunts

UEFA is a cunt

In what world is being banned an excuse for not buying a player???
Even AW wouldn’t come out with that one.

and we SHOULD care, forget about our own problems for one minute and think of the ropey decisions against us the last 3 years and there’s a DEFINATE Uefa / FA / media conspiracy against us.

Love it Gervinhowig. You have the right to your opinions, farcical as they may be, but to rant against Wenger for not making transfers – with a username referring to a transfer Wenger has just made? Oh dear – credibility failure of epic proportions!!

Lansbury on his way? Will we get a left-back? « savagegooner

[…] other news, UEFA are apparently set to ‘discipline’ Arsene Wenger after communicating with the bench during the match against Udinese. I find it a bit silly really, […]

I guess they’re going to have to impose heavier sanctions for the next match, maybe they will tie him to a chair in a pitch black room with headphones playing white noise for the entire match day.

What is all this? In Barcelona’s last match against Madrid, Messi and Villa did the exact same thing UEFA claimed RVP did and did they even get as little as a warning??? NO!!!! of course not, God forbid them suffer the wrath of the champions. I think for a game that fair play is being preached more than Christ, they need to start acting it.

In Arsene they thrust?

Typically they both independently engage in auto-fellatio, but they have discovered that wanking each other off gives far greater pleasure.