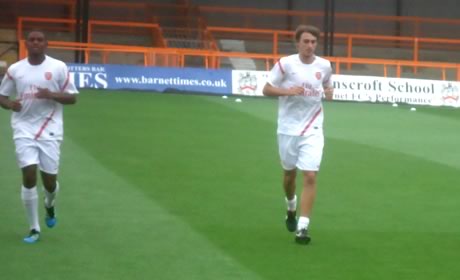 Arsenal, like all clubs, are in a constant state of flux at Reserve level, with players frequently embarking on, or returning from, loan spells, and others earning first-team call-ups, so it was to coach Neil Banfield’s immense credit that his side managed to maintain something of a title challenge last campaign despite him calling upon almost half a century of players.

The quest to go one better than last season’s second placed finish began at Underhill on Monday night, with the Gunners prevailing 2-1 over a Manchester United side containing the likes of Darren Fletcher, Darron Gibson and Tomasz Kuszczak in a hard-fought encounter.

A large crowd for this level was in attendance, possibly owing to the fact that the majority of United fans live in London, and, although what they witnessed wasn’t the prettiest affair, it did represent something of a coming of age moment for several of those involved.

The core of this group has been playing at this level for around 18 months now so, not only are they well aware of the intricate facets of eachother’s games, but they are also now more developed physically, something which was demonstrated on Monday through the performance of centre-back Daniel Boateng. Boateng, despite still being prone to the occasional lapse in concentration, dealt well with the threat of eventual United goalscorer Mame Biram Diouf, especially in the first half, emphasising how far he has come in just a short period of time.

Some more established names were to the fore, too. Vito Mannone made some impressive stops in goal, although how long he will be happy to remain third choice goalkeeper at the club remains to be seen. Sanchez Watt and Chuks Aneke, the two Arsenal goalscorers, drifted in and out of the game, but, when they did receive the ball, their respective qualities were clear for all to see.

Both players are expected to depart the club shortly, but in very different guises. Watt’s time at Arsenal appears to be coming to an end, with Benik Afobe having overtaken him in the pecking order, whilst Aneke, who could be mistaken for Jay Emmanuel-Thomas in appearance and performance, is in need of a loan spell.

It was Afobe, though, who threatened to light up proceedings early on. The 18 year old embarked on a lightning run past the majority of the United defence before fizzing a shot wide. He subsequently succumbed to injury and had to be withdrawn, but his importance to this side was emphasised by the considerable period of time it took them to get going again after his departure necessitated a formation change.

The Arsenal Academy does have its critics, but, against Newcastle at the weekend, Emmanuel Frimpong became the 48th graduate to play for the first-team since the Academy was established.

Seven members of the current first-team squad are amongst those, showing that, even if it is a long, treacherous road to the top (Frimpong played 79 games at Reserve and youth level), if you possess sufficient quality and an attitude to match, then you will most likely be provided with an opportunity to shine.

The players in the current set-up are at various signposts on their route to the top. Some will fall off along the away, but games such as Monday’s help to provide the coaching staff with assurances that many are, currently at least, heading in the right direction.

I’ve heard a lot is expected from Daniel Boateng, will be interesting to see how he goes this season

I think so many of us turned up is because it was free!
Also I thought Vito, Boeteng (he looks very much like Adebayor), Afobe & Aneke done great.
We had an incredibly small left back who came on for traore but interestingly he done quite well.
One more question though, is Niel Banfield always such a demanding, loud & seemingly very manager?

I’ve been really impressed with Sunu at the under-20 world cup. How is he rated at Arsenal? He’s older than Ryo and Chamberlain, I think, and they appear to have jumped ahead of him. Sunu didn’t play enough when he was on loan at Lorient, so that could obviously be hurting his chances, with good reason; overall, I’m just curious what the buzz is about Sunu within Arsenal: no chance in hell he’ll ever make it, or right there with Afobe?

I think the academy is great. We should continue to produce talent. My problem is with the first team. Wenger needs to moderation. Youth is great but experience is better. Buy an established centerback.

Glad the youth beat United. Afobe, Aneke, Oz and Miguel are all going to be in the fist team soon. Work hard.

Arsene Wenger’s got a magic hat right? « Up The Arsenal

[…] Traore – Our deputy left back has a groin problem, picked up during reserve duties at Underhill on Monday night, and is a doubt for the match […]

JeorgeBird – stop the lazy pseudo journalism just because Jet and Aneke are similiar in size their games are very different. If you seriously watch the reserves games you wouldnt lump the 2 players together.
1- one is more of a team player with mumerous assists for his strikers as mentioned in the official team programme by Afobe and Freeman
2 – one is more an individualist who can scores dribbles and finsihes off
team play. I suggest you do some research before you say Aneke is similiar to Boateng. – Ignorance as facts.

Of course, they are not exactly the same, but they do have similarities. Perhaps Emmanuel-Thomas is a bit more individualistic, but Aneke does have that side to his game too, and has found the net quite frequently at Reserve level. Emmanuel-Thomas, meanwhile, created lots of opportunities for team-mates during his time at Arsenal too, so I would say that, in some regards, they are similar players.