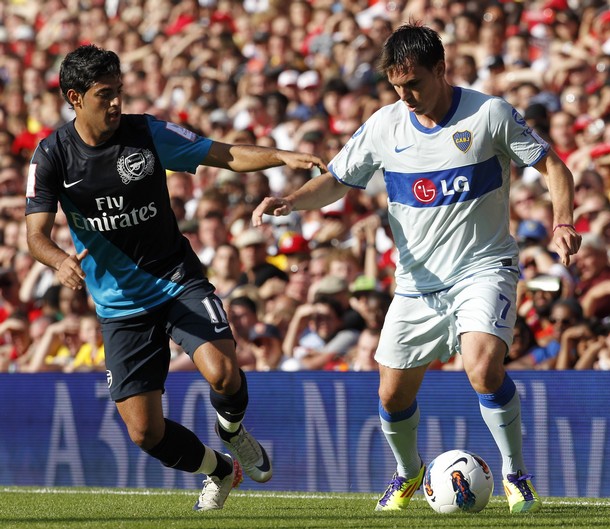 The Mexican international has struggled to secure a regular starting berth at the Emirates since signing for the Gunners six years ago and will now move to the Primera Division outfit for the season.

Tipped to have a bright future in North London, having won the Golden Boot at the under-17 World Cup in 2005, Vela spent two seasons on loan in Spain with Salamanca and Osasuna before gaining a work permit and making an exciting impact in the Carling Cup campaign of 2008-09.

Despite flashes of genius on the ball, and regularly demonstrating his trademark chip finish in friendly matches, the 22-year-old has always sat behind the likes of Bendtner, Chamakh, Walcott and Arshavin in the pecking order.

Having been loaned to West Bromwich Albion in January and with Arsene Wenger adding Ryo Miyaichi, Alex Oxlade-Chamberlain and Joel Campbell to his first team squad this summer, it would appear that Vela’s return to the Iberian Peninsula could pre-empt a permanent switch next summer should he impress his new employers.

Feel sorry for him, but has never really looked like making the grade at AFC and I think he will go next summer. Wasn’t helped by getting out-mexicaned my Hernandez

Dude!!! Relax……He turned 22 in March, where was Chicharito at this point of his age…..Inconsistency is common at young age, let him go and do well…..

Chicharito or Javier Hernandez to use his actual name is 23.

When we was 22 he scored 21 goals in 28 appearances in the Mexican league.

Always wanted him to succeed, shame he never quite made the step up. Good luck in Spain, Vela.

Sad about Vela. Sadder about Chamakh being our only cover for RvP. No fear though because the boss has signed so many wingers! He can make any of them play central.

with the wingers weve brought do you think that wenger will play theo more in the middle?

John B.
Reply to  skinnygooner

Does that answer your question?

Arshavin in the hole

wow who knew that the greatest striker that ever lived, nick bentdner was really so good? I mean so far wenger has signed Alex oxo-cube chambermaid, mr miyagi, & now Joel campbells soups! all to replace him!!

you’re not even remotely funny

Says the person called chocolateleg 🙂 do yourself a favor & grow yourself a sense of humor & then get a life. you might get to like it.

He never really got a run of games to be fair. I guess Wenger didn’t like what he saw in training. He is a good pal of Cesc’s so maybe he was just being kept to keep the Captain happy. Well, that doesn’t need to happen anymore.

Get out Vela and stay out. Chicharito made you look like a fool.

Didn’t he though? They have similar builds, skill sets, backgrounds, etc… Chicharito comes and lights the world on fire and Vela languishes on the bench.

Arsenal have too many player stealing paycheques. Get them out.

Really thought vela will be a replacement for Eduardo but never got a look in..good luck to him and am so glad to see the back of denilson, bendtner & eboue..just almunia, diaby and squillachi to leave and it will be a complete wipe out

It takes a real talent to sit below Chamakh in the pecking order. Don’t worry, Gooners, we’ve replaced Vela with Joel Campbell! He’s going to light up the Prem (so long as we play Universidad de Costa Rica or Cuba every week).

Van Persie better stay fit the entire season, or we’re relying on Vermaelen to get his 5 goals.

In a way it really does seem like Chicharito has stolen the spotlight from him, both in the national side and in England. I hope he puts it together one day, as a Mexican I always wanted to get an Arsenal shirt with Vela on the back, looks like I made the right choice by going Wilshere though. Good luck to him in Spain.

At this rate all the moaners will have no-one to complain about!

Might as well just sell him now. He’s never had a proper look in which, to me, seems unfair. Maybe he was a slacker in training or something. I always thought he looked quite good when he played for us. I think he got a bit fucked over at West Brom too. Di Matteo signed him got sacked and then he never really got the look in he was probably promised after a good start. I think he’s probably played his last game for Arsenal and the loan is only to make sure he goes for decent money if he… Read more »

Reminds me of Guiseppe Rossi, once he found his right place, started showing his quality. Think Vela can do that too, so not wise to sell him, loan being the right option.

Fuck off John B your negativity is ruining all the delicious banter on hear all the doom mongers can fuck off too and elton John, Kate Middleton and fucking lily Allen while I’m at it! Cunts

Talking is over, football begins. « savagegooner

[…] reported over the last few days and Carlos Vela, who he’s been likened to, could be set to spend the season on loan at Real Sociedad. A bit of a surprise that he was given the No.11 shirt then never really got that […]

i was watchin skysports news this morning and the ticker on the bottom of the screen it said wenger is defo gonna sign a CB before the window closes. lets fuckin hope so n he’s not pullin our pisser. i dont no alot about scott dann! to me he seem’s like a cheaper option… WENGER SPECIAL!! will he be able to do the job next to TOMO V?

What a day to get started… « All Things Arsenal Football Club

[…] African Cup of Nations in January. So what happens if Van Persie is injured over that time…? Vela’s loan move to Sociedad seems set to happen, and with Bendtner out the door to a destination unknown… an injury to […]