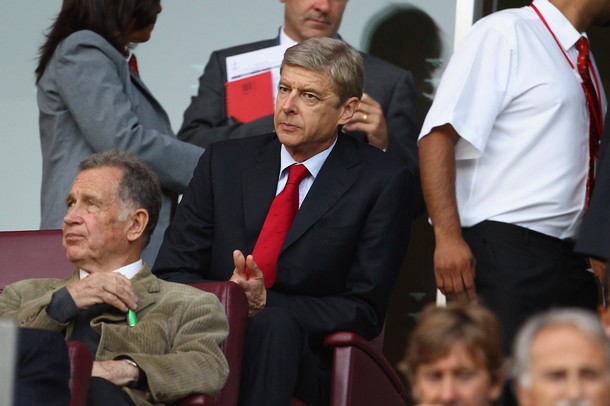 How to interpret Arsene’s behaviour on Tuesday night?

Barred from the touchline by UEFA after confronting the officials in the aftermath of March’s defeat to Barcelona, was our esteemed Gallic tactician genuinely confused by the rules of his ban, or was his decision to brazenly communicate with Pat Rice on the Arsenal bench an open ‘fuck you’ aimed at Michel Platini and his euro-minions?

Arseblog News would like to believe it’s the latter, but at the same time keeps its fingers crossed that UEFA assume the former; the last thing we need is for Wenger to be absent from the bench for the second-leg against Udinese with nervousness already pervading the first team squad.

For what it’s worth, this is the line Wenger has spun for Arsenal.com:

“It was difficult because you didn’t really know what the rules were.

“They told us first we could communicate through my assistant and at half-time it was not like that. It was a bit confusing.

“It is a real concern because up to what level can you stop someone doing their job?

“I did not feel I had done a lot. We tried to respect the rules as they are set by UEFA but, of course, it is very difficult to see how you can stop someone having an influence.

“What is true is that you can’t go to the dressing rooms but I did not do that.”

Make of that what you will…

So are these rules written down anywhere so that a UEFA official can say, “Wenger, you cannot do what you’re doing. It says so here, in section 3, subsection 3.5, 5.6 – ‘Thou shall not provide instruction to your team via your assistant. Note: You may use UEFA sanctioned carrier pigeons at half.” Why are these rules a “mystery?”

They probably are not clear so they can pick and choose who they punish and who they ignore like all their other rules.

Jesus christ, this a joke! The media making this into more than it should be!

Either way… samir is a cunt

Respect to you my brother !!!

Your right nasri is a cunt. The sooner he fucks off the better and he’s an ugly little lezzer.

i can’t understand why you all saying that nasri is cunt, $amir, bla bla bla. he is at least better than fabregas. he doesn’t say where he is going. in fact, he never said he is leaving this season. this is good for arsenal. we have bargaining power over the market. imagine nasri behave like so called ‘arsenal legend’ who just left us, that he only wants to go to manure, we wouldn’t got $23mil. remember on earlier summer, nasri only valued at $8-9mil by manure. arsenal fans, let’s not make things worse. hv a good relationship with nasri, he… Read more »

samir nasri is a cunt

I think UEFA should ban Eduardo.

Stepanovs is my Dad...
Reply to  Jth

How old are you lot?? If someone put me on £200,000 a week I,d drink spit from a dead cunt dogs cunt also. Let the man move on and lets move forward. By the way…….let’s hope we sign someone as gud if not better.

We could get mata for the 25m we get from man shity, but no, Arsene doesn’t buy expensive players, falcao just bought by Atheltico Madrid!! We are a smaller club than them? We are in the top five sporting clubs finanaically in the world and we cannot afford mata or hazard or cahill or baines, the list goes on.

If wenger HAD gone in to the dressing room, he’d have met that ever annoying cunt geoff shreeves, & his camera man, who would’ve been laying in wait to pounce, such was their interest in the whole debacle.

Jefff Shrieves must have been some little toad at school.

-‘They’re smoking in the toilets Sir’

-‘Fuck off Shrieves you little cunt!’

Joey barton is a cunt…

last sentence is a good one, mainly because Mourihno did it a few years ago in a laundry basket didnt he? he escaped punishment that time..

I bet it was him that told on andy gray & Richard keys!!

I can imagine it now,.

-Rupert- “bloody hell, what the fuck do you want you little cunt”

Tune in tomorrow when Geoff catches his Mickey in his zip,…

Liamogunner
Reply to  The hurler

As long as nobody saw Arsene dropping dirt out of his trouser leg we’re ok.

How about signing some quality players now Cesc has gone and that French cunt is off to Man Shity. Might be worth getting some in before are second leg against the Italians. Can’t see us going through without reinforcements. We need 2 x midfield, 1 x forward, 1 x CB, 1 x LB at very least. Has Arsene lost the plot. He only has 13 days to prove he hasn’t. The jury’s out……

The 4 other big clubs are spending while we do fuck all. Wenger you are a time wasting cunt and you are going to screw this club right up the arse.

Up the Arse! That’s the spirit lad.

Na$ri is an elephant cunt fuck him…and Arsene on the other hand is starting to imulate that fuck head…start signing players you stubborn old fuck..Damn!

Get back down the docks, lad.

Those sailors won’t wait around forever…

Is this cuntblog? You cunts! I’m in the right cunting place

Fuck off 5am YOU CUNT you clearly drink from the furry cup!! Are you Na$ri his cuntess trying to win some favour with the crowd! Fact is any Gooner on this blog would play for nothing but the privilege to pull on the red and White shirt of arsenal. That’s why we hate mercenaries like nasri and adeybayor yet will always hold a Candle f

Unlike Nasri I don’t already earn millions a year and if I only gave the level of performance he has over three years I’d have been made redundant by now at my place of work. Nasri is a cunt….. an ugly cunt with fucked up teeth…… cunt

Well I can talk about the fans in India and the mood is not very great. The first time in the years that I have been supporting them, I am actually scared of teams like city and liverpool. Arsenal need to strengthen up.

And the truth is that for long we have tried to business the last minute trying to get the best deal. We did that with Arshavin didn’t we? Only this time it has come back to bite us in the ass. Man united say what you may knew that they were going to be without some key players. They identified their targets, bought them early and now the likes of young look like they were man u players for ever. We r still waiting for august 31st. Then we’ll wait for the Jan window. Then next year van Persie and… Read more »

A big WHATEVER! to the UEFA nonces, we’ll carry on being great, regardless of your shitty corrupt cesspit of an organisation.

Nasri = David Silva backup. (when he’s not cleaning his boots that is)

Please please please you do know its not your money dont you ?
PS Nasri is a cunt oh I said that

Nasri looks like he could eat an apple through a letterbox. Ugly bastard.

Good work on Tuesday Arsene!! You were not on the sideline and we secured a victory…. we are alive in the tie and in the lead for the return leg, and the current squad are giving their all. As the transfer window nears a close it is important to support Arsene. We all would have love to have the squad sorted by now, but due to some bizzare events we havent. Different from previous transfer windows, we have cleared most of the dead wood from the squad to make way for new arrivals, so we have no choice but to… Read more »

5AM if you were doing a job you loved and getting paid more in a week than most people earn in three or four years why the fuck would you care about moving somewhere where you can get ten times as much as people earn in that time? No one needs that much money, except greedy mccuntface Na$ri. Maybe he needs the money to sort out his shocking horror buck tooth cunt mouth.

I would pay to play for Arsenal and I’d be ten thousand times more motivated than the goofy whore. I would sweat blood if I had the opportunity to play for the Gunners.

I find it hard to believe that an economics graduate cannot work out that if we don’t spend to improve our team then we will not receive champions league money? All football matters aside this makes no financial sense?? Please Arsene sign some quality now!!

Oh and Nasri is a greedy bucked tooth bitch

Oh, and I forgot to mention, Paul Scholes is a cunt

If Wenger would have stayed at home, watched the match on the box and spent the whole time on the phone to Pat Rice would that have been acceptable to UEFA? Wankers.

Oh and Evra is also a female reproductive organ..

[…] Wenger hit out at UEFA for their lack of clarity, saying, “It was difficult because you didn’t really know what […]