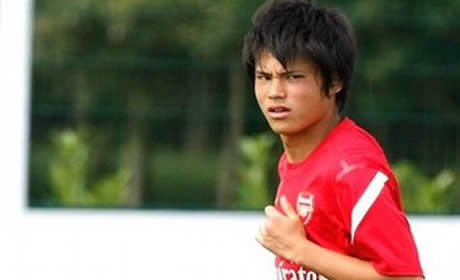 On the eve of the new season Arsene Wenger has sung the praises of two of his newest and youngest players. Alex Oxlade-Chamberlain, who signed from Southampton in midweek, and Ryo Miyaichi will both figure for the first team and Wenger believes they’re brimming with potential.

Speaking about Oxlade-Chamberlain he said, “We feel he will be one of the big English talents of the future. We want to build a strong base of local players.

“He has exceptional qualities. We were after this boy for a long time and we believe in him.”

While he is convinced the young Japanese will contribute positively to Arsenal this season, saying, “We got the work permit for him because he is an exceptional talent.

“Overall we are very happy because he is one of the players who can have a big impact this season. He will play as a striker, right or left, he is a winger type and he is very keen.”

Miyaichi will not figure this weekend, nor in the Champions League qualifier against Udinese, as he is currently in Japan finalising his work permit but Oxlade-Chamberlain could make the bench for the season opener against Newcastle.

Can’t remember the deal with these 2, there both CB’s, is that right?

amlunia is an asthma patient, thats why he took up to goal keeping……..

Hope they have a good season.

I think I’m getting the impression that Wenger is preparing us for a new project youth.

Can we please have some more negativity, I’m missing my daily dose and I do so enjoy it.
Let’s hope we get a good result tomorrow and things will start looking rosy again.

You thought the last project was youth? it’s gonna look geriatric compared to the new one. Anything over eighteen and five foot will be discarded. And defenders aren’t welcome.

Damn you Arseblog, now I always call him Oxencart-Chamberpot.

I find it hard to remember what his real name is.

pizzle you’re not funny, everyone else is having a bit of banter and a laugh and you come in with shit joke.

I have so so much hate for you.

but I will toss your cock none the less

Let’s be Arshavin you! If Delia was an Arse!!

“We want to build a strong base of local players”
Why then waste 15 years Arsene???

Change of formation my diminish the hope of another CB.

Arsene my experiment this new line-up: 3-6-1

That looks ridiculous. Now if you don’t mind I need to get to work on my jet propelled unicycle whilst shaving the bottom of a chickens arse. Good day

I keep calling him oxencart chamberpot too. Makes the song sound better too
“Cesc Cesc go to Spain we’ve got Oxencart Chamberpot” oh maybe not then.

his mum calls him Oxo Cube

WE CAN ONLY FUCK MORE PIGS YOU FOOLS I AM THE BIGGEST ONE!

Lord Cunt has spoken!!!!
Let all those present begin to fuck or lest they be fucked themselves!!!!
BEGIN!!!!

Arsenal: anything over eighteen and five foot will be discarded. And defenders aren’t welcome.

In Arsene I trust fullheartedly….NOT!!!

your a fucking mug mate. I’d love to spit on your cock and give you a good juicy hand job

goontown…… thimbert is a god, it is proper to praise him

What planet are you on calling fabregas? While you’re at it why don’t you start abusing Henry and Wright too.

Ok lets hope that we have a new start here and that we will sign some players before the end of August to fill the great hole left by Cesc and cunty lesbian face.

If not we all arrange the transit vans and get down to the grove and abduct Arsene and not give him back until we have Messi, Grath crooks and a few others in the team.

“Overall we are very happy because he is one of the players who can have a big impact this season. He will play as a striker, right or left, he is a winger type and he is very keen.”

This part of the quote is pretty interesting… He will play as a striker, right or left

Moving towards a more conventional 433 formation with 3 centre mids instead of the Cesc play where you like ‘number 10’ role?

your second name is just aweful

full of awe! I know right?

YOUNG V HAS SHOWN WHERE HIS HONOR LIES!

ALL FUCK FOR FUCKS SAKE

Both players are class…. P.s what are you talking about?

THIS ISN’T MY WORLD HAHAA

YES IT IS TRUE I AM HERE HAHAHAHAHA

PREPARE FOR A HUNDRED COCkS UP YOUR ASS AND A HUNDRED MORE DOWN YOUR MOUTH!!!!!

I look forward to seeing how they perform – as I do with every Arsene Wenger protege – however this is not the time and place to “look forward”, so to speak. Wenger, I respect what you’ve done for the club, but the future is now.