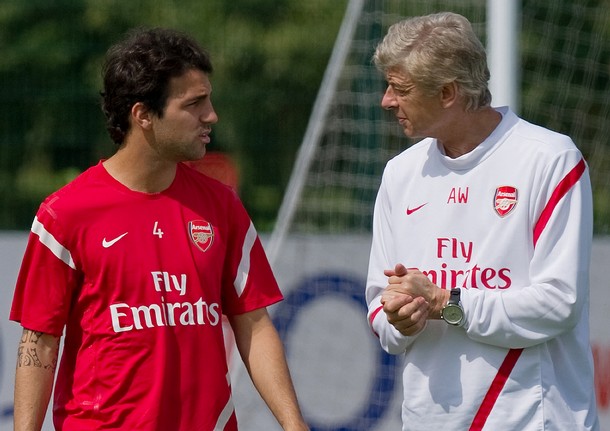 Cesc Fabregas will play no part in Arsenal’s friendly with Benfica having not travelled to Portugal with the first team squad.

Arsene Wenger has told a press conference in Lisbon this evening that the Spaniard is still not ready to play a competitive match due to injury; a statement likely to be viewed by supporters as a smokescreen ahead of a near inevitable move to Barcelona.

“I do not want to speak about the transfer of Fabregas because I have done that three years now in every press conference so I don’t think there is any more need to add something,” said Wenger. “I love Fabregas and I want him to stay, that is basically it.

“Everybody is free to think what they want. We cannot stop people raising questions.He is just coming back from injury and is not ready to play in a game. But he is not injured”.

The BBC reported this morning that Ivan Gazidis met with Nou Camp officials in London with a view to ending the Fabregas transfer saga once and for all. However, with Barcelona seemingly still unwilling to match the Gunners asking price, Sky Sports claimed a new bid, thought to be in the region of £35 million,  has been rejected.

Drawn against Udinese in a tough Champions League qualifier there now appears to be an 11 day countdown before Gunners fans find out once and for all whether their star man will remain at the Emirates.

With Robin van Persie and Samir Nasri both banned from the first leg, Arsene Wenger will surely be under pressure to field Fabregas if he is fit. Obviously if the 23-year-old does turn out against the Italian side he would subsequently be cup tied for the group stage of this year’s competition and likely see his owner’s forfeit their chances of claiming a £40 million booty for his signature.

While Fabregas has not been selected to take part in Saturday evening’s Eusebio Cup showdown, Arsene Wenger has selected a strong 19 man squad. Japanese youngster Ryo Miyaichi returns after sitting out the Emirates Cup, Henri Lansbury looks set for his first  pre-season minutes of the summer and Ignasi Miquel is also included after helping Spain to the under-19 European Championships in Romania.

He said Nasri only might be back for the start of the season, but then why was he chosen as a part of the French squad?

He’s got his bi-montly pep talk with Evra to attend.

Let’s hope Lansbury gets more minutes than Bartley did, and is able to show beyond a shadow of doubt that he is much better than the likes of Eboue, Diaby and Rosicky.

Lansbury can not play in the same positions as Eboue and Diaby is more versatille through the midfield so it is unlikely Wenger sees him as a player to replace them. Rosicky is a good player and the closest opion in the squad to Fabregas as a playmaker but needs to accept his talents at shooting from 25 yards are gone and focus on passing only. The more Lansbury is involved the more certain it appears Nasri and Fabregas are going.

You know i’m really starting to hate wenger. It’s sad to say but he is incapable of telling the truth in any situation. Stop playing a charade and let us the fans know what we are in for this season.

The truth is that becuase the club has not been able to move any players on, Wenger is hamstrung by the lack of a squad place and freeing of funds to accomodate new signings. Jagielka et al are expensive enough potential additions without having to pay Bendtner’s wages while not playing him to accomodate a new signing.

Says alot for our team that nobody wants them, that shows bad management in the first place.

No Gibbs?!! That’s a worry a week ahead of the new season. Surely Traore won’t play 90 mins, so it will be interesting to see who else gets the nod to play there.

Wish hed just be honest and say fab is off. Hes got to go now, his position is nearly untenable.

Nasri should go too. Thatll give us the best part of £60m to improve the squad, if arsene can bare to spend any of it that is.

Also that squad looks very weak with the first lge game a week away.

Arsenal want Fabregas and Nasri to ask to leave, thus forfeiting the “loyalty” bonus they would be due from their sale. A 15% loyalty bonuses on £60m is £9m so no small sum indeed. It goes someway to compensating the club for paying them during July and August!

i don’t think the media and barca’s ridiculous behaviour should determine the tenability of our captains position. wenger wants him to stay, he’s one of the best midfielders in the world, he loves arsenal and barca don’t have enough money to buy him. the fact he’s maintained radio silence means his position is very much tenable. does know one remember the last actual quote from cesc? that of course one day he hopes to return to barca. but he is under contract at arsenal and loves the club and would be happy to be there this season. that any movement… Read more »

If it’s not the total lack of desire to improve our squad, we also have to put with the lack of a backbone to bring both of these transfer sagas to an end.

If these players end up staying at the club,then their lack/limited involvement in pre-season will hamper us further.

Somebody please order a backbone off amazon and send it to Wenger.

Arsene has a backbone, otherwise he would have sold Cesc for £27m already and spunked £15m on (the supposed panacea to solve all our problems)Samba.

“Everybody is free to think what they want. We cannot stop people raising questions.He is just coming back from injury and is not ready to play in a game. But he is not injured”.

What is that shit? Just not even trying with his lying now. Becoming a bit of a joke this summer, shame really.

Why cant he tell the truth, he always covers things up!! I’m fed up with this bullshit….IM GOING SLIGHTLY CRAZY, WHY DO I WASTE MY LIFE ON THIS

Because, like the rest of us you don’t have a life. Focus on what “we” (Arsenal) have and not have nots. Man U just spent 18m on De Gay, we have Szczesny, Gibbs is an international LB and yet people say he is no good and want to spend £10m on Enrique? WTF. Ramsey, Myachi, Afobe, Lansbury, Frimpong. Get excited, these are the guys with Arsenal “DNA” (I hate that saying) and are genuine players worth getting excited about. They need our support and it’s about time we started giving it to them.

A voice of reason. Well Sir at least you won’t have to go underpants shopping this weekend, for yours surely are not in a twist.

re: “owner’s forfeit their chances of claiming a £40 million booty for his signature” I completely disagree. Playing Cesc in the CL qualifier doesn’t mean we would lower our price on him. If Barca want him, they must pay the fee, regardless of whether he can play in the CL for them or not.

CU(£40m)oCO
They should have bought last week as the Euro has plunged more than 5% Vs. the Pounds so Cesc just got a whole load more expensive.

I know it’s still only pre season, but that list of players going to Portugal does not really seem that impressive to me. Compare that to United, Chelsea, or City squad, and they’ve definitely got more proven names than us. Can’t help but think that this will be more or less the squad that will be available for the 1st leg CL qualifier with Theo taking RVP’s place. Jeez, I hope a couple of these kids make a significant break through this season!

It is impossible to defeat an ignorant man in argument.  ~William G. McAdoo….
And so I won’t…All those constantly on Wengers back,you are not coaches,you are not managers,you just have an Internet connection….so please just pipe down,support the club and see what happens!!!

I mean, seriously? Is Arsenal acting stupidly? Curious how this Barca fan conveniently forgot to mention their cuntish behaviour in the press?

Koscielny, Nasri, Cesc, Wilshire, Walcott, and Diaby all out for the Benfica match. Wilshire and Koscielny look set to miss the start of the season now. Possibly Walcott will miss opening day as well.
Forget signing new players this term, can we just sign some competent medical staff members who can get/keep our players fit?

remember the very harsh critisisms from the dutch coaches over arsenals methods? saying they are poor and explain the injuries to vanp?

maybe there is something there…..

What happened to Koscielny all of a sudden? And why isn’t Gibbs making the trip? Also I love that we’re being linked to Shinji Kagawa if Cesc/Nasri leave. Great player.

I heard there is something of a consensus between other fitness coaches (including comments from that of citeh), that the Arsenal train too much. What with other teams usually splitting the time up to include strength training (which we don’t), they spend less time actually playing football & sprinting, so they don’t get as many of these niggly injuries. It would seem strange for Wenger’s staff to get this wrong, seeing as they’re so meticulous about diets etc., but would seem to tie in with us suddenly having so many injuries following our pre-season training. Really hope Wacko’s achilles doesn’t… Read more »

i hear you. i feel that training (defensive drills an obvious one) and building injury prevention into the routine are areas arsenal could improve.

Though that presumably doesn’t apply to Cesc this year..