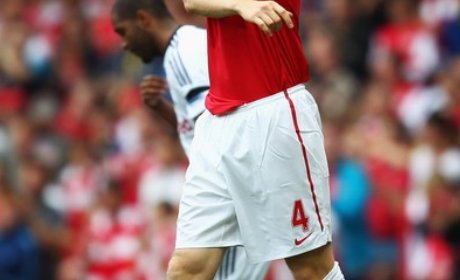 Arsenal have now played their fourth League match of the season and are starting to generate some useful data. This is both a good thing and a bad thing. Good because we can compare how Arsenal are playing now to previous seasons and bad because Arsenal haven’t started really firing yet so the numbers they are generating are pretty poor.

¹ Leads the League in this category
² Lead both teams today in this category
*There is a disagreement over how we should all count cards. Some places report that Arsenal has 8 yellow cards because they feel that the 2 yellows that led to Frimpong’s red card are already counted in the red card. I disagree with that only because for official disciplinary table purposes the League states that Arsenal had 10 yellows and 3 reds before today’s game.

Tim has forgot to mention that we’re definitely leading the league in the number of Arsene Wengers. 😉

An oversight I will not repeat!

There’s no need for abuse when you’re trying to make a valid point. Or do people not take notice of you until you start calling them names? Either way the waste of space complaint is always amusing – what space exactly are we talking about? Did you have an article on the site that had to be removed to accommodate this one?

I heard the Internet is almost full so they may need to remove this article for a celebrity gossip one. Too bad I enjoy reading this article after every match.

I think either (a) Tom is plant by that CUNT Na$ri, or (b)He’s the CUNT himself in disguise. Either way that CUNT SN is a CUNT and Tom is his prophet.

I would, actually, love constructive feedback.

Perhaps a different format might help some people see the obvious comparisons. Some charts or tables might be nice. The article is still great though and its interesting to how bad our stats looked before this game.

Appreciated. I thought the same thing. It’s too long. I’ll have to ask the Arseblogger if I’m allowed to use a second image.

What a good use of space on the internet! I care about stats and read this post for the comparisons and interesting numbers, you crazy dude!

You sir are what is called a dick, so don’t comment unless asked to, in other words ssshhhhhh dipshit

To confirm I was talking to Tom, the dipshit

Come on the Arsenal!!!

Some damn fine stats. Our decline during the 2nd half seems almost proportionate to the number of girls harry asked to the prom. This must be investigated deeply by wenger

Tim, could you tell me how many aerial duels Mertesacker was involved in? Also what was Arteta’s passing stats, like total passes, passing accuracy, no. of through balls?
Thanks.

Especially with Arteta, perhaps compare him to Cesc somehow, maybe against a similar opponent or something? And perhaps compare Koscielny to Mertesacker? I know it’s only one game and means practically nothing, but knowing quantitatively how the new boys stack up wouldn’t hurt. And as always, thanks for the numbers, always appreciated.

I did a similar thing with central midfielders on my blog during the transfer window. I’ll keep that in mind in the future. Thanks. Good to know that my ideas are generally well accepted.

Per was involved in just one aerial event in the entire game (clearance), and he lost.

That’d be the time near the end of the game when the Swansea striker used his forearm to climb on Per’s shoulders in order to head high and wide from a cross, if I recall. Per was right where he should have been, and the striker was never going to get a clean header. I thought he played well. And interesting that Swansea had the highest number of pass attempts per game until today and a large percentage of possession, too. They’ll be the next Barcelona, then? No, you know what they say: lies, damn lies, and statistics. Often the… Read more »

How does Arshavin put up those kind of numbers and look so lazy at the same time? any stat on the number of funny faces he makes per game?

Arshavin is not lazy. He does make tackles running back etc. What he does is efficient. He seldom do unnecessary move.

It might make some of the replies appear odd (am on phone) so sorry about that. But not about deleting arseholes.

And Tim, feel free to use charts/graphics as you wish. This is your column

“. . . because arseholes are tolerated too much”

Never mind Wenger’s supposed about face on his “youth project” after the Manchester game. In my Arsenal world, this is the most welcome shift in policy since the season started. Less cuntishness on Arseblog News, please!

0 – number of red cards we got today. LOL

I think it’s still too early to make too much of the 2011/12 stats. We haven’t looked good this term, especially playing with a weakened squad and having to play with 10 men in 3 matches. These stats mostly confirm this. Apart from matches against Barcelona, I don’t remember having such terrible possession stats during the Wenger years as we had in the first 3 matches. I would prefer to wait a little while to see how our purchases bed in, and hopefully we’ll start playing with more confidence. Then I’d be looking to the stats to see how our… Read more »

glad about the 3 points. and the fans were superb. Almost moved me to tears.

We love you Arsenal!!

I love these ‘By the Numbers’ posts – keep ’em coming!

Anyway, moronic imbeciles may want to stifle you, but I love the way you do the stats.

I’d love to see the stat for how many times Koscielny steps out from the back four and just stands still in front of an onrushing attacker.

Interesting stats, think it would be useful to have more comparisons like comparing aspects of our game to previous seasons and earlier in the season.

Also a small narrative would be goof picking out the most interesting stats.

First off, thanks for the statistical breakdown… Always amazing to me how arshavin, regardless of how shit he plays, seems to be one of the more statistically effective players on the squad…for me AA is a dude you bring in for the last 20 minutes when you are drawing at Wigan. A player who is always potentially a game winner but at the same time reguraly gives the ball up in precarious situations… Pains me to see kosciony make one of the most promising attacking runs of the morning… pains me to see coquelin

Anybody else notice how salty Santos looked sitting on the bench? Also benayoun didn’t even seem like ke was on the pitch… Bringing him on was like giving frimer another red

Great stats. Always an interesting read (and on that point, if there are those not interested, then don’t fuckin read it would be my possibly overly simplistic advice), and always one or two of the points that make me grin.

Keep up the good work fella.

Who took the armband after Van Persie was substituted?????

[…] from 6 yards out. However, with the amount of injuries that we have, maybe a little luck is due. With the amount of shots that Swansea had, I will be the first to admit, we did ride our luck for the Swansea […]

here’s your so called cesc-replacement-world-class-playmaker, ramsey
http://arsenalist.com/video/?id=xl0klg
left me speechless

I’m more worried about Blackburn on Saturday. Not sure how Morrow and Selley are going to cope with Batty’s aggression. Shearer and Sutton a worry as well. It’s a dangerous one. Damn these arriviste northern clubs with their sugar-daddy money.