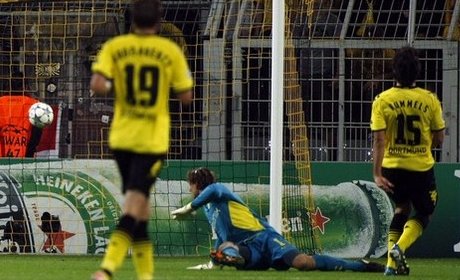 The fact that this article is coming out today, and that it’s comparing three Champions League matches that all ended 1-1, is entirely UEFA’s fault. The official UEFA site used to be the best source for all data related to Champions League matches but some time between Arsenal’s qualifying match and Tuesday they changed the format of their “Match Center” and got rid of most of their useful statistical data. Is there nothing UEFA can’t get wrong?

On a whim I checked out WhoScored.com and was pleasantly surprised to see that not only do they carry the Champions League data, it’s the exact same format as the data I use for analyzing Premier League matches. It was like waking up on Christmas morning thinking you’re going to get some boring old toys and discovering that your dad bought you a shotgun.

I dumped the Arsenal player data and match data into a spreadsheet and started looking at what unique datapoints appeared in order to craft my usual “by the numbers” article for Arseblog News. But after I saw that Man City and Man U both ended up with 1-1 draws I changed tack and decided instead to compare the three matches.

A couple of quick notes on the data. Yes, I realize that the three matches were entirely different for several reasons. Arsenal played conservatively in a tight group so that they didn’t come away with an opening loss. Man United’s group is terribly easy and that showed in how they approached the game as well, on a stroll. And Manchester City came up against some fierce opposition but were the home team of the three and as such their numbers are different. I’m also fully aware that I am comparing one match and any one performance could be a fluke. Still, this first chart compares 26 different data points over three teams and some interesting numbers pop up.

*Shots as calculated by OPTA do not include blocked shots.  Knowing this, I put them in the chart as blocks and added blocks to shots to create a category called “chances created.”

Manchester City dominated the chances created category as they should since they had 68% of the possession and were the home team. The surprising number there is Man U, who only created 4 chances, despite making 640 passes and owning 62% of the ball. Man U last created a mere four chances when they had their asses handed to them by Barcelona in the Champions League final. But in that game Barcelona owned 68% of the ball and so, having a small number of shots is to be expected.

Arsenal, meanwhile, played the most defensive of the three matches and that shows in the number of clearances Arsenal were forced into (44), interceptions they made (28), total number of tackles (18), and the low passing number (420).  To give you a comparison, Arsenal’s Premier League averages for passing are:

420 passes in a game where they hit 59 long balls (14%) is a very defensive game for Arsenal. The good news is that despite such a defensive stance, Arsenal still created 9 chances and managed to capitalize on one. That’s a goal conversion rate (goals per shots) of 11% (1/9) which is a decent rate when you consider that each of the Premier League winning teams for the last five years have averaged slightly more than 12%. On Wednesday, Man U’s conversion rate was 25% but City managed just 4% which is coincidentally what Arsenal’s conversion rate in the Premier League is right now — and they are struggling.

I also wanted to highlight two Arsenal player performances and compare them, like-for-like, with players from United and City. I chose Song and Koscielny and compared them to Barry and Carrick and Smalling and Kompany. Here’s that chart:

As you can see, Song and Koz had a huge night for Arsenal defensively. 41% of Arsenal’s 27 attempted tackles came from Alex Song. Neither of the other two defensive midfielders highlighted here came close to the number or percentage of Song. Carrick picked off more passes than Song, but four interceptions in a game is a decent number (Gibbs averages 4.5 per game to lead Arsenal at the moment). Song’s 11 tackles helped Koz and Per because they didn’t have to make as many desperation lunges and between the two only had 3 total tackles.

The numbers prove to me that Arsenal’s game plan was to play conservatively and try to steal a point or three. Accomplishing that took two massive performances from Alex Song and Laurent Koscielny but they got the job done. The numbers also show me that Man U took the game lightly and never really bared their teeth and that Man City had trouble coping with Napoli’s 3-5-2 formation, letting the Italians create 16 chances at home while being profligate up front and wasting an amazing 25 shots.

In the end, it’s just one game (each) and we don’t want to draw too many conclusions but as we go forward, I should be able to compare League for League, game for game, and team for team against averages for each team. And if that doesn’t excite you, well, then I don’t know what will.

I recognize this is more of a blog-style post than a news-article-style post. I felt some explanation was in order considering the timing and content. As always, feedback is appreciated.

Interesting stats. Although statistics do not always show the complete picture, I believe the media and unfortunately some of our fans are too quick to write us off.

I find it really interesting, more so as we progress through the season and comparisons can be made. I look forward to more Mr 7am

Also you spell recognise like an American. Are you American?

I dont have a clue – but how many games in England kickoff at 7am?… Just sayin

Hey Andreas, some kickoff at 6am if you live in new york

Saturdays kickoff is 5am for me. Suck it haterz

Kick off is *midnight* for me, the night before. Honolulu Hawaii, baby. Being a Gunner in the middle of the Pacific is lonely business.

Wait till you see how I spell color and math.

Great article. I thought Koscielny and Song were immense on Tuesday, and I am not surprised to see their performances reflected in the numbers.

Agreed. Good interesting stuff and bears out a lot of the post game subjective comment. Song is going to be key to us tightening up this season, and I’ve no problem with him just sitting deep all year long.

Ally that to a clicking of the creative side and we might surprise a few people I reckon.

Really like your posts, both here and at your blog.

I switched on the Man.City match last night just in time to see Napoli take the lead. 5 minutes later Man.City won a free kick and as the ref is arranging the wall Aguero moves the ball 2 feet to the left so that the angle would be easier…..and they scored. Fuckin’ cheat!

Nice stuff Tim. I read Grimbo castigating you and Jeff’s love for stats

Tim – the ManCity numbers are very misleading because they hit the goal frame 4 times (!). That must be some kind of record in itself. A few inches and the score would be 5-1. It’s just bad luck.

Hmm, much as I like a stat, you do have to take them with a big pinch of salt. I distinctly remember Koscielny giving the ball away at least twice in the first half with p1ss-poor (shortish) passes straight to a Dortmund player. Listen, I like Kos, but on another night Dortmund (or whoever) could easily have punished those glaring errors, and the poor fella would get it in the neck for giving goals away. But the stats would suggest he had a blinder… I guess what I’m saying is this: you need a new row in your stat spreadsheet… Read more »

Ifs and buts T-Town, Napoli hit the woodwork too as I recall, regardless of what it could have been, it wasn’t. Lord knows Arsenal have been on the wrong end of their fair share of great stats/crap luck/bad result combos in the past. Thanks for the efforts 7am.

Sure but 4 times?! That is a little extreme.

For me these stats show that our defensive play was not that exceptional as you seem to mention in the article: Song has more attempted tackles, which does not prove anything as those could also be failed tackles or fouls. Whereas interceptions seems to me more important as they clearly indicate the ball was won back and in that department Song has the lowest number. And such a high number of tackles smells more like Arsenal was more often attacked than United and City. About Koscielny, he is clearly better than Smalling, but looking at the stats again worse than… Read more »

The only thing I could make out with this data is:
WE LACK QUALITY!
Or also our opponents were very strong.

Our opponents were very strong, theres no doubt about that, regardless of the fact that Dortmund were in the 4th Pool, they are the German champions, really organised and very good going forward..and they were at home, coupled with the fact that our team is still gelling, after the new additions and the horror of Old Trafford. I don’t think we lack for quality, we have perhaps lacked for drive and attitude, call me an optimist but I’m starting to see signs that our sqaud at present is proud to play for Arsenal, and will put in the effort required.… Read more »

Brain is frizeld after Reading all that

I will take that hard fought draw any day over the cuntalona backpass debacle last year. They actually fought like men, and while Kos’ passing may have been poor in the first half, he more than made up for it in the 2nd with his defending. In his time at arsenal, I’ve seen him on the ground in his box with head injuries more than I care to remember. He is giving his all for the Arsenal and I love him for it

Those who point put that stats are misleading can take comfort in the fact that WhoScored has changed the numbers for that game. Song is now credited with 12 tackles, Koz with 9 effective clearances, but 5 interceptions. Other numbers have changed as well. I don’t understand why they would publish a set of numbers and then change the data 48 hours later. Poor form.

Really disappointed that Harry Redknap’s success rate with the ladies didn’t make it into the stats. Maybe next time.

I find it even more interesting now. May I suggest back bacon makes a much better breakfast for watching the football, I know you guys have a soft spot for streaky.

I’m not sure who ‘you guys’ are, but I’m sure not one of them…streaky, pffffft.

The biggest positive from the match is Van Persie is still not out for 5 months with an ankle injury.