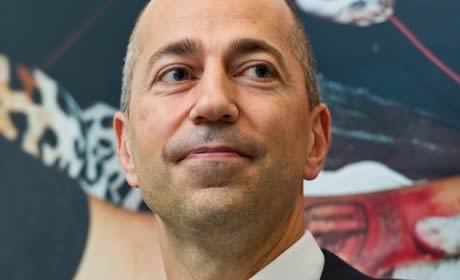 Arsenal CEO Ivan Gazidis says that new owner Stan Kroenke will speak publicly about his plans for the club in the near future.

At a Sports Industry Group breakfast, Gazidis addressed the fact that the American had made little or no effort to communicate with fans since he tookover the club earlier this year.

“The ‘Silent Stan’ moniker is over-used”, he said. “He’s not silent, he’s very involved. He will speak when the time is right.

“Stan said he’ll speak to the fans when he’s next in UK and he will. He is not media adverse but not here for ego gratification”.

And at the same meeting Gazidis defended under-fire boss Arsene Wenger. As pressure grows on the Frenchman due to Arsenal’s increasingly poor form, Gazidis hit out at critics, saying, “He’s not broken. To see him portrayed as some kind of idiot is damaging to the game. We need to think about that He’s frustrated.

“He’s as focused on delivering success as ever. He didn’t suddenly become bad manager, that’s nonsense”.

Gazidis also said that the economics of football were driving Arsenal’s financial policy suggesting that the sugar daddy approach is unsustainable.

“Football can’t go on acting like it’s in an bubble so I hope there’ll be an adjustment to take account of wider economic issues. Financial Fair Play is here. If you go out and spend enormous sums on players, you must ask how you are going to get compliance”.

It’s a brand new line up in defense. The main error here was waiting as long as we did to buy these players, but ive little doubt we’ll get a LOT better in defense over the next few games.

Yeah, recent form over the last 2/3 years suggests we’ll definitely get a LOT better back there. Excellent, historically proven point, well made and I’m sure it’ll come true

It can’t get much worse!

“He didn’t suddenly become bad manager” nope your right, he steadily became a worse manager over the last 3 years. He failed to push and make changes when they were desperately needed.

I don’t see RVP staying after this season.

I love Arsenal but Wenger needs to do something different quick, maybe he needs to be more aggressive and instil some fight and passion between the group. Maybe then some tenacity can dig us out of this hole.

Cant get much worse? Now thats some good news!
Heh

Seriously having doubts about Wenger recently but pleased to see these comments. Think the ‘we’ve turned the corner ‘ statements were a little premature but do think a change of approach is in progress and a step back in the direction of pace over patience is where we’re headed. With the bfg signing I think we can take it that AW is acknowledging change was needed and within his budget he’ll get us there better than the celebrity managers elsewhere. He wont come out and saying was wrong but IMO that’s a good thing. Looking forward to a Gooners surge… Read more »

Sorry, but Per was signed as Verminator cover, not in any a concession that we aren’t good enough. which is of course crap

And manures sugar daddy is?

Fair point, but they’re spending money which only adds to their debt.

Anyway, I suspect United will be the next club bought out by a super-rich owner.

I heard it was the Qatari Royal Family looking at buying them up….

They spend but they also make a LOT, a lot more than us, of money and pay their debts on time. I dont see the Glazers leaving as long as the money is rolling in and they dont have to spend their personal fortunes.

Kroenke on the other hand will suck us dry and sell us out. He is Kmart.

Kroenke is a business man who wants to make money and as long as Arsenal are making a profit then he won’t make any serious changes. As long as the Emirates is sold out – 60,000 – every match and thats fine for him, but if that was to change and he actually started to lose money then he would act. He knows Usmanov will buy he’s share – probally, so he’s not too concerned. That’s just our awful luck that we as supporters have to accept.

Or stop being one of the 60000. Until it hurts the bottom line for the club nothing will happen.

We are not selling out anymore, and I can tell you from a Gooner living abroad our brand is not a strong brand and getting weaker by the season. We are not good at selling the brand Arsenal even the deal with the Emirates if you break it down is not so good.

They are playing games with OUR club. Persisting with a fool who does’nt see the point in defensive coaching. Is there anything to up our spirits ?

That’s sort of how the negotiating goes at Arsenal.

Please stfu lizard man and do what your there to do, why is Wenger doing his job again when signing players and negotiating deals?

well, i think wenger did suddenly become a bad manager.

why was djourou playing at a back position. He is a central midfielder. He CANT CROSS. We saw that in the blackburn game.

THATS BAD! A BAD DECISION! any other topflight manager wouldnt have done that. He would make sure we had a decent sub for that position.

I’m sorry since when did Djourou become a centre mid?…

I think it’s quite telling that the best Gazidis can say about Wenger is he’s ‘not broken’. Hardly confidence boosting stuff.

And Kroenke will speak ‘when he’s next in the UK’ is pathetic. Someone should introduce them to modern technology, we don’t need the man to stand on a soapbox outside the stadium.

Poor stuff from the CEO. What does he actually do? What power does he really have at the club?

All hes going to say is about financial prudence blah blah blah bunch of inept fuxking idiots running the club into the ground.

Stop all this jabbering about what a billionaire might or might not say. It has no bearing on the way we play. Our basic problem is a lack of defensive nous and, more importantly, a lack of protection from midfield. Since Silva left we’ve needed a proper holdiing player. Grasp that, and you have the root.

Ivan the terrible really does fit this tosser !!!

What’s weird is just how quickly people forget. Last season when TV5 was out, from Christmas until the Carling final Djourou was immense. I can’t remember how many clean sheets he and Koscielny kept … and how few goals we conceded. It was only when he went off against Newcastle did the game fall apart. Diaby didn’t help of course, and neither did Squillaci, but it was Djourou’s injury that set things off. And remember that our next loss after Newcastle was at Wembley. This was all without TV5 and with Koscielny and Djourou. Whatever is going on with our… Read more »

The only Sam is Nelson
Reply to  eleanor

Koscielny had Messi in his pocket at the Grove last season as well, don’t forget (quickly, or otherwise) Looking through the comments on AB news I’m struck by the number of posters who seem to imagine that being a fan is somehow conditional. That support can be withdrawn due to perceived or actual lack of success, or that decisions made regarding selection warrant a recalibration of the level of support (“hmmm, Benayoun starting? Support level down to 6.145” or “Theo scores! 7.935”). This means that there are hundreds, if not thousands, of utter mouthbreathers who call themselves “Arsenal fans” –… Read more »

Tim
Reply to  The only Sam is Nelson

And they say no man is bigger than the club, well AW seems to be the board hold him in such high regards

The only Sam is Nelson
Reply to  sd

for all the current upsurge in fans talking about the need to replace wenger there’s precious little coming from them about *who* might be a better bet. the truly stupid come out with pure idiocy and float mourinho etc but in the absence of a credible and *superior* alternative then wenger is obviously by far the best manager to lead arsenal. does anybody really want mark hughes in charge ffs? of course once we’re down it’ll be left to big sam to come and pick up the pieces, but a season or two in the championship would be bracing; like… Read more »

James
Reply to  The only Sam is Nelson

How are any of those better than Wenger? Reeling of a list of “big” names is the kind of idiocy that would have seen us plummet to doom after George by betting the house on Cryuff rather than bringing in the unkown new boy who won doubles. So until you can show why you think they’re better, you’re talking bollocks, my friend. Sorry.

chris
Reply to  The only Sam is Nelson

Wait didn’t we bring in Bruce Rioch for a woeful season before signing Wenger?

[…] for Arsenal, Gazidis has announced that Arsene still has the confidence of the owner, and that the American would come out and speak to the public soon. How soon is that, we don’t know, as Stan says he would only when he comes to UK next. That […]

“He’s as focused on delivering success as ever?” hahahahahaha. He’s having a laugh.

We don’t need just focus; we need effective. My 15year old can be “as focused as ever,” yet, he cannot manage Arsenal. I don’t care about Wenger’s focus. Unfortunately, he’s just inept!

Why are people complaining about our crosses? Unless Chamakh is in we shoudn’t even bother. We dont put enough people in the box quick enough for it to be useful.

Year of the Ox « Up The Arsenal

[…] Frenchman the so-called ‘vote of confidence’ or any thing like it. Our Chief Exec was asked if Wenger’s tenure was in danger at an event and responded that it certainly isn’t. That does not constitute Wenger being given assurances […]

I’m not normally motivated to comment. In fact i never have. but ‘keeping your powder dry’ used by Gazidis and posted on arsenal.com has really got my goat. It would be a suitable idiom if we weren’t 17th in the league after 5 games -8 goal difference. When the japanese invaded singapore, we were sitting there keeping our powder nice and dry pointing our guns out to sea as the enemy rode on bycicles to take the island. Man City et. al. are far less stealthy with their approach: money! We need a little fire power. on or two guns… Read more »

Fighting Back « Up The Arsenal

[…] began with CEO Ivan Gazidis speaking at a Sports Industry Group breakfast at the start of the week.Ivan spoke not only of owner Stan Kroenke’s full involvement with […]