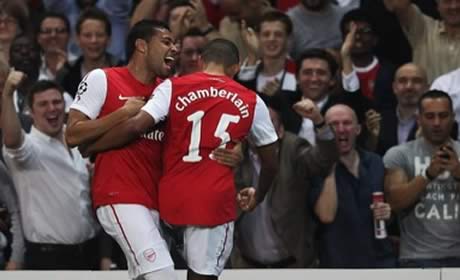 Both Alex Oxlade-Chamberlain and Andre Santos were happy with their first goals for Arsenal during last night’s game with Olympiacos.

Speaking afterwards, the young Englishman, said, “To make my first start in the Champions League obviously I was honoured and proud, even more proud to get the three points with the boys. It was a massive game for us, to build on the momentum from Saturday.

“It was a really, really good game and I’m happy with the way it turned out. There’s always nerves, you want to do as well as you can you, want to impress the fans, the manager and help the boys out, so obviously I was a little bit nervous”

“I’ve got a lot of hard work to go, and a lot of improvement on tonight’s performance; there are areas that I’ve already thought I need to improve on. But it’s a good start for me and I’m proud to have scored my first goal in the Champions League”.

And his joy was matched by Brazilian defender Santos who looked far more at home than he did during his debut against Blackburn.

“It was an important goal and I’m very happy, because it was my first game in front of the supporters, and it’s always good to score and help the team. I’m very happy with the way I’m adapting.

“I always hope to score goals and help my team. I hope now I can have a good time in the Arsenal shirt. Olympiacos didn’t come to defend – they really attacked our team. They showed a lot of quality and created a lot of chances, but we scored twice and finished up with a great victory”.

Give me the likes of these two over any of the Larry Larges who are no longer around, and clearly couldn’t give a shit about playing for The Arse.

A narrow but good win for us yesterday. Thought we controlled the 2nd half pretty well although there were some nervy moments i.e. the crossbar shoot. Also I wanted to point out that Santos after 2 apps. only needs one more goal to tally Clichys scoring record in 264 apps!! Quite astonishing but Santos looks extremly comfterable in possession (perhaps the best in the team with vanpersie) his crossing is superb compared to clichys. I think he will improve his defending which he did in the second half, just needs to stay in line with the backfour and work his… Read more »

[…] young man declared himself ‘very proud’ of his first Champions League goal and so he should be. There were glimpses of real quality there […]

Super impressed with the Ox. He seemed assured and (dare I say it?) *incisive*. Unlike our teams over the last few years, he seemed willing to run at defenders, which was a breath of fresh air (actually, Gervinho is much the same way, which I just love). Santos, on the other hand, I am a little less sure about. He has a tendency to wander inwards and leave that left flank vulnerable. He does this with the Brazilian national team too, and I’ve seen that exploited by opposing teams often. Let’s hope Arsene (who surely knows this) has a plan… Read more »

I was impressed when he got caught upfield, bombed back and won the ball on halfway. More of that please.

He’s not exactly helped by Arshavin in front of him.

Andre certainly looks tenacious! Defending, and going forward. Will surely win my heart in no time with more performances like this!

Looks like more of a winger than left back.

Santos over clishit any day and the OX and gervinho over the fat ponce. Now let’s turn over that shit house. COYGs

Ox has talent for sure. Just hope that if he puts in a few more good performances the media don’t start going mental about him being the future of England and all. Santos just needs to work on his defending a bit and he can become a real quality full back. But as arseblog says, he did work his socks off yesterday. I do wonder about Arshavin and Chamakh. Will they ever find their form again? And is Arshavin just completely bereft of confidence and not enjoying football anymore or is he really that lazy? Why not play them in… Read more »

Great performance in patches last at times we played like the old arsenal, but the play broke down far to much once it got up field. We can’t keep carrying arsarvin, it’s. Like playing with ten men all the time. Defence was really good, we have to be caredull not to fall into what the press are doing and analyse every good we concede and assume it’s down to bad defending. Having said that we can get spanked against spurs and the like if we keep having to carry certain players who won’t track back can’t keep the ball and… Read more »

I thought Santos was great last night. A proper footballer, tenacious defending, and aggressive going forward. And his goal was a thing of beauty and skill.

I’d put him on for every game if I was picking the team. Super quality, and serious authority. Great signing, and for less than we got for Windy Clichy!!! Nice one.

And I think Arsenal were the only Prem team to win on this CL matchday? How did those two media darlings from Manchester do? Won’t see THAT in the Daily Telegraph though..

Time the fans copped on to the anti AFC and anti AW in the media, and bucked against it. COYG.

“Both Alex Oxlade-Chamberlain and Andre Santos were happy with their first goals for Arsenal during last night’s game with Olympiacos.”

I think Oxlade scored against Shrewsbury, so really, the content should be the Ox scoring his debut goal in Europe!

[…] began. Goals from both Oxlade-Chamberlain and Andre Santos ensured that 3 points was secured, and two very happy new signings. For match highlights go to http://player.arsenal.com/player/968-olympiacos-h-bitesize the free […]