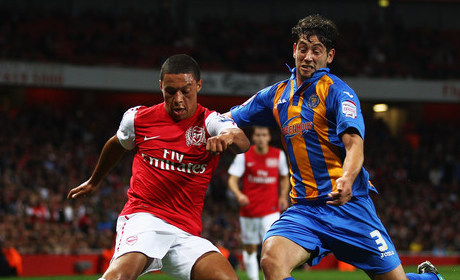 The Carling Cup returned last night as Arsenal took on Shrewsbury and, for long periods in the first-half it seemed as if an upset may have been on the cards but the Gunners rallied in the second period having equalised just before the interval and eventually prevailed 3-1.

Key in the stark turnaround of fortunes was Alex Oxlade-Chamberlain who, prior to last night, had been restricted to a solitary cameo appearance for the first-team in the 8-2 mauling at Old Trafford last month. This was the first sustained chance for him to shine and, to judge from his performance in the second period in particular, it was one that he took with aplomb.

Oxlade-Chamberlain had demonstrated a couple of glimpses of potential during the first half but struggled to make a sustained impact on proceedings before the interval. In the second half, however, he was to the fore as Arsenal’s football increased in rhythm.

His pace and trickery saw him cause countless problems for the Shrewsbury defence and his goal demonstrated a refreshing tendency to shoot when provided with the opportunity. The strike was somewhat reminiscent of Jack Wilshere’s against Sheffield United in the same competition three seasons ago, although it remains to be seen whether Oxlade-Chamberlain will proceed to make the same sort of impact that Wilshere did on the first-team last campaign.

Last night’s performance suggested that, although it would be raising expectations a little for him to challenge for a starting berth straightaway, the England Under-21 international should now become a more regular part of the first-team squad, having been left out of the matchday 18 on several occasions in recent weeks.

Francis Coquelin also turned in an impressive display, making several interceptions and surging forward when provided with the opportunity and the battle between the Frenchman and Emmanuel Frimpong, who partnered him last night, for first-team chances is already proving an engaging one.

There have been tentative signs that Coquelin is edging ahead, having made the bench at Frimpong’s expense against Blackburn last weekend, whilst the latter was withdrawn 13 minutes from time last night to be replaced by debutant Oguzhan Ozyakup and Coquelin remaiend on the field for the entire ninety minutes.

Last night’s display, particularly during the first period, may not have been the most convincing, but, in Oxlade-Chamberlain and Coquelin, it was at least demonstrated that competition for first-team places will intensify.

Ryo was also provided with his first Arsenal outing but, despite a couple of bursts of pace, failed to make a sustained impact. He will need to be given time before a breakthrough is made and, depending on the outcome of Saturday’s Fourth Round draw, may be in line for a start in the next round of the competition.

I was at the game and Ryo got a great reception when he came on. He looked good, promising, and was making good runs and the occasion moment of skill. It was too little time to make a sound judgement however.

Beat Bolton on saturday and draw with Spurs.Failure to get a minimum of three points from these matches will raise more questions for Wenger.

i was at the game too and i was really impressed with Coquelin more than Frimpong. Djourou is becoming a calamity. i dont know what happened to him? Jenkinson lost confidence. Ryo had little time but did show some nice foot work. That new comer Zyakup looks really promising too.

What was Park like? I only saw the highlights and did not see much of him

Bit swings and roundabouts in truth.

The only Sam is Nelson
Reply to  Mooro

[…] our lads did us proud and came away with a 3-1 victory. Match highlights and goals […]

Park is becoming an enigma, I’m not even sure he exists. Haven’t been able to catch any highlights, I don’t think I’ve even seen him in an arsenal shirt yet. Wouldn’t be surprised if he was some made up player created just to shut the fans up.